Supporters welcomed back to our Research Centre 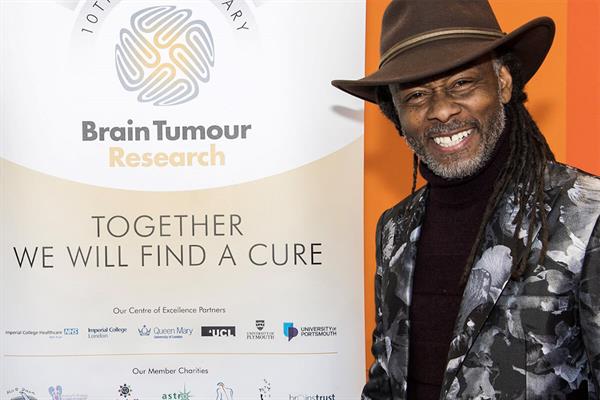 Patients, their families, those who have lost a loved one, fundraisers, scientists, celebrities, and corporate supporters gathered at our Centre of Excellence at Queen Mary University of London yesterday as we relaunched the Wall of Hope.

It was the first event of its kind to take place at one of our Centres since our lives were disrupted by the pandemic. Guests were invited to see for themselves the cutting-edge research taking place in the labs at Blizard Institute in Whitechapel and to hear updates from Brain Tumour Research Chief Executive, Sue Farrington Smith MBE, and from Professor Silvia Marino who leads the research team at the Centre.

There were poignant updates too from those closely affected by this devastating disease including Eddie Adams and his mother Julie Ruggiero who spoke movingly about what Eddie’s diagnosis had meant to them and from Eileen Smith who lost her son Michael.

A number of supporters placed tributes on our new-look Wall of Hope, with each tile representing the £2,740 it costs to sponsor a day of research at one of our Centres.

Among those placing tiles were patient Liam Bergin, who travelled from Cheshire with his son Joe. In a touching tribute, Liam placed nine tiles a number of which were dedicated to young people who have lost their lives to brain tumours.

There was also cause for celebration as Harriet Low attended, along with her family, immediately after her graduation ceremony where she was awarded a Masters in Health Humanities from UCL. Harriet’s brother, William, was the inspiration behind The William Low Trust, a Member Charity of Brain Tumour Research.

With just over a week to go until Wear A Hat Day, the world of millinery was well represented with celebrity milliner Stephen Jones OBE and milliner to Her Majesty The Queen, Rachel Trevor Morgan among the guests who took part in a photocall to celebrate the upcoming fundraiser. Also in attendance was TV’s Danny Clarke (pictured), who lost his sister Margot to a brain tumour and is one of the celebrity faces of Wear A Hat Day 2022.