We are grateful to Craig who worked with us in September 2020 to share his story here. Sadly, he passed away in November 2021. We remember Craig as we continue our work to raise awareness of this devastating disease and to fund research to help find a cure. He will be forever in our hearts.

Craig Johnston was diagnosed with an astrocytic brain tumour in 2018. The 33-year old dad-of-two from Newton Aycliffe in County Durham has since had two brain surgeries, radiotherapy and is currently on his second course of chemotherapy to treat the cancer. Determined not to let his diagnosis defeat him, Craig has turned to fitness, setting himself ambitious goals as he tackles the disease head-on. He is now in training for the prestigious Ironman UK endurance event, due to take place in Bolton in July 2021, with the ultimate aim of earning a place in the Ironman world championships at Kona, Hawaii.

Before my diagnosis, I would describe my life as pretty unremarkable. I was just your average working man. I had been to uni, got a good job and had a great family; a beautiful wife, Jilly, and two amazing kids, Alistair and Millie. I think I thought I’d just do what everyone does; buy a house, get married, have a family and a career, watch the children grow up and leave home, and eventually retire. Then one day, in June 2018, everything changed. I’ll always remember it was the day the England football team set new records in a 6-1 victory over Panama in the World Cup. I went to bed that night and that was the last night I had without being a ‘cancer patient’.

“The next thing I remember is waking up in my bedroom with my parents and two paramedics by my side, telling me I had suffered a seizure.” 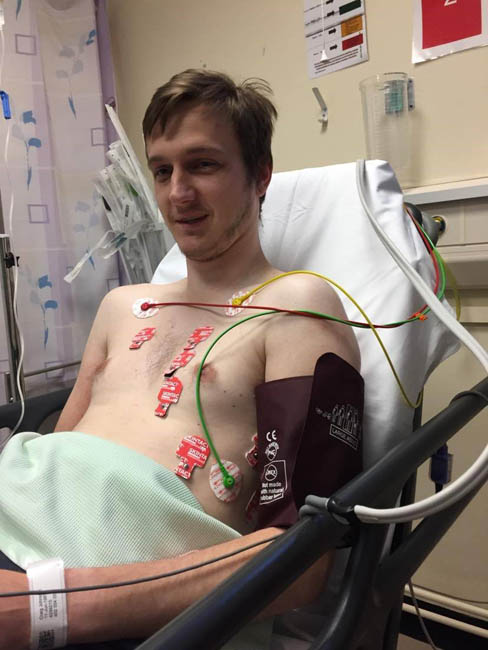 I was put into an ambulance and taken to A&E at Darlington Memorial Hospital. As a precaution, they did a CT scan and they found a bruise, so I was sent for a more detailed MRI scan. Receiving the results from that scan was the point at which my whole world came crashing down. The doctor said they had found two metastasised lesions and I was sent to see a specialist neurosurgeon. Ten days later I was in surgery at James Cook University Hospital in Middlesbrough having a craniotomy. I was the first person in the North East to be given a ‘Gliolan’ or ‘pink drink’, known as 5-ALA, prior to my surgery. The relatively new medicine helps identify brain tumours by causing them to glow pink under ultraviolet light. I was able to benefit from 5ALA after the NHS rolled it out as a part of their support for the Tessa Jowell Brain Cancer Mission (TJBCM).

“The only disadvantage of 5-ALA is that is causes photosensitivity, so I had to wear a hat and sunglasses after drinking the dye and then when they moved me around the hospital, I had to have a sheet over my head!”

Surgery was really scary, as none of us knew what to expect. Thankfully, it seemed to go as well as it could have done and I recovered really well. A day-and-a-half after my operation I received the results of the biopsy, which would determine exactly what type of tumour we were dealing with. I went back in to get the results and I remember sitting down while the doctor read out the email from the pathologist. It was clear straight away that what they had found wasn’t good but they couldn’t determine whether it was a grade 3 or a grade 4 tumour. What was clear was that I had been diagnosed with brain cancer and I would need to be treated accordingly. 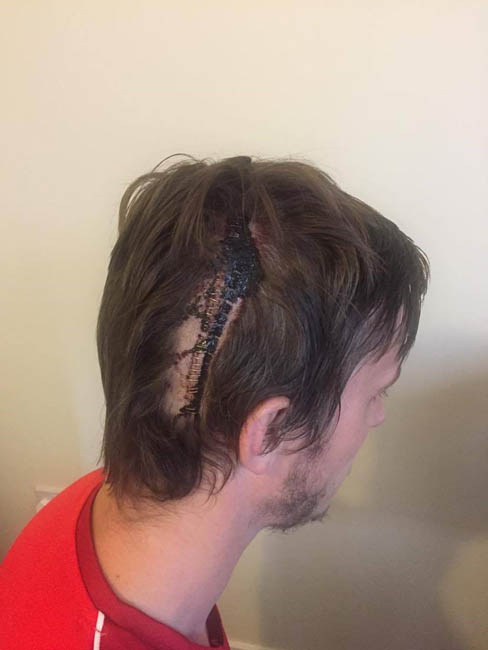 After surgery, the hardest part was the waiting. They can’t just start delivering radiation into your head when you have an open surgical wound. For six weeks I rested and healed and prepared for a six-week course of 30 sessions of radiotherapy, to be followed by a course of the chemotherapy drug temozolomide (TMZ). We went to stay near Glen Coe in Scotland and spent some quality time together as a family as I recuperated from the operation. When we got back home it was down to business.

“Cancer treatment really changes your outlook on life. Rather than thinking about how much money you can earn or what you can buy, you start to focus on what you can achieve. You want to spend time with your loved ones and to have experiences rather than material things.”

The radiotherapy was fine, just inconvenient having to go to the hospital for treatment daily. The machines were constantly getting delays or breaking down, so we'd get moved around to different ones but luckily for my treatment it was only a few minutes in the machine, so often we would only have to wait a few minutes and get squeezed in between other patients. I lost some of my hair, which still hasn’t really grown back properly but I’m not too worried about that in the grand scheme of things.

From a young age I was always really interested in endurance sport and the idea of athletes pushing themselves to their limits. My dad ran the Glasgow marathon in the early eighties and I remember, aged five or six, seeing his finisher’s medal at home and stashing it in my toy box. I was in awe of his achievement and I always wanted to do one myself. My fitness journey began properly in January 2020, when I began trying to clean up my diet a little bit and I started going to the gym.

However, In July 2020, following a routine MRI scan, I received a call from my surgeon telling me that the site where the tumour was removed was showing signs of regrowth and that I would have to go in for more surgery. It was a huge blow but this time round I was more prepared for what was to come. Everything felt a little more routine, although the risk of Covid meant I had to self-isolate for two weeks before I was admitted and for another two weeks once I was discharged. I decided to shave my hair off, as my hair became matted with disinfectant after my first operation. That was a great tip somebody gave me! The soreness of the wound wasn’t as bad this time and I was only in hospital about an hour on the morning before surgery then went home the next day. 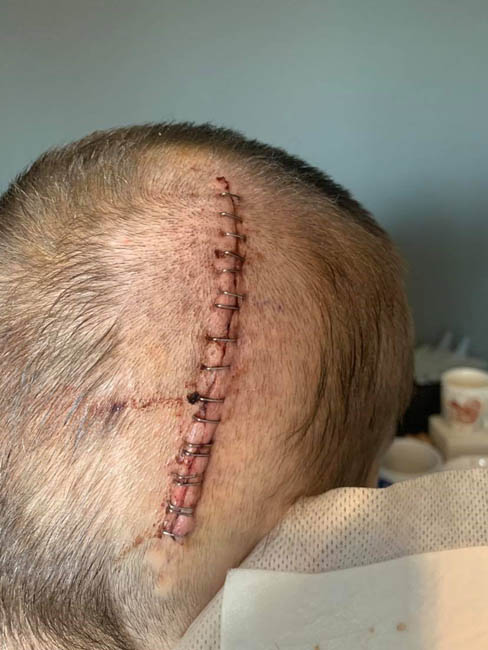 A few days after surgery my consultant got in touch with the results of the histology. It looks like the new tumour they removed was a recurrence of the original tumour (which was eventually determined as being grade 3), meaning chemotherapy was once again the next course of action. It wasn’t a huge surprise to me; I had prepared for the worst but hoped for the best. As a concept chemotherapy is quite scary but, in my experience, in practice, most people seem to tolerate it quite well.

“It was around the time of my second brain surgery that I decided to start documenting my journey via my YouTube channel ‘Craig’s Cancer to Kona Vlog’.”

The idea came to me after my GP advised that I keep a diary or a record of everything and as my son is obsessed with YouTubers, it seemed an appropriate and fun way of doing it. I’m hoping it will be something other people in my position can find and draw some tips or inspiration from. The main focus of the channel is physical training; it’s a place to share what has and hasn’t worked for me. I am hoping to get some more coaching experience, so I can help people plan for their own endurance events.

“I also use the platform tackle the issue of mental health. One of the main things I struggle with is not being able to plan ahead, as my fate is dictated by the tumour and my medical team, who analyse my scans to decide the next stage of my treatment.”

As frustrating and annoying as it can be to hear what the medics have to say, I put all of my trust into them as I know they have my best interests at heart. I advise others dealing with a difficult diagnosis to do the same. 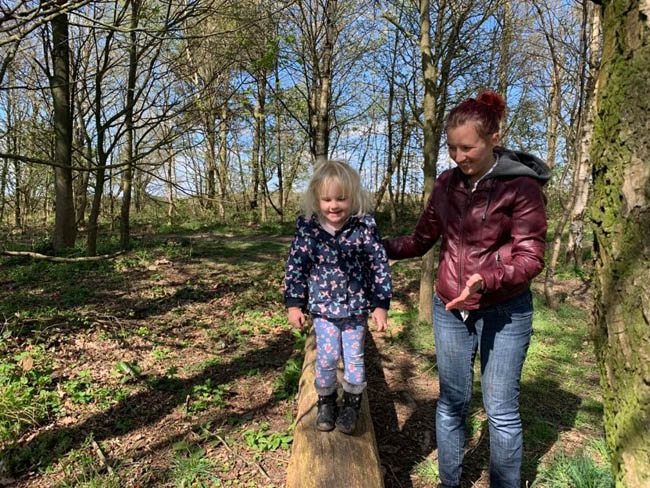 “In many senses dealing with a brain tumour is easier for me than it is for my family. No child wants to see their dad go through major surgery and it’s particularly tough for my wife, who has to hold everything together for the kids when I’m in the hospital.”

There’s a lot of guilt involved. If I’m having a bad day, I know they will too. When I was first diagnosed, I was really worried that I was causing a lot of stress and pain for my parents but I know now that these feelings of guilt are really common. Losing my driving licence was another really difficult thing to deal with and I was nearing the point of being able to get it back when, frustratingly, I got the news about needed a second operation so that wasn’t to be. I have lost my job as a quantity surveyor, as a result of not being able to drive, and there is a big question mark over ever getting my licence back. So now I’m looking into doing something like coaching, with the possibility of working from home.

“Exercising and setting goals allows me to take back some of the control I have lost to my illness. It gives me motivation and has enabled me to develop a passion for something really positive.”

The TMZ is making me sicker this time and I’m having to sleep a lot in between training sessions but I am still managing to get out walking, running and cycling quite a bit. I was due to run the York Marathon in October but that event, like many others, has been cancelled due to the pandemic. I’m still planning to run the distance on 18 October; initially I was hoping to complete it within three hours but if I can get somewhere close to 3:30 I’ll be happy, as the treatment has ruined my training plan. Whatever happens, I am absolutely determined to make it to the start line of Ironman UK in 2021. More than that, I want to complete it in a really good time of 12 hours or less. Life is about living, not just existing. I never take the attitude of ‘woe is me’, on the contrary I am determined to make every moment count and take every opportunity that comes my way. When I was going through radiotherapy, I met other brain tumour patients who are sadly no longer with us. That has reinforced my attitude of living for the moment.

I have also set up a fundraising page for Brain Tumour Research, with the initial goal of raising £2,740, which represents the amount it costs to fund a day of research at each of the charity’s Centres of Excellence. By being a ‘test case’ for the 5-ALA pink drink, I have personally benefitted from research into brain tumours but I am fully aware that funding for research into this awful disease is severely lacking, especially when you consider that brain tumours kill more children and adults under the age of 40 than any other cancer. I am hoping my story will not only offer hope to others in similar situations but will also inspire people to consider donating to this hugely important cause. 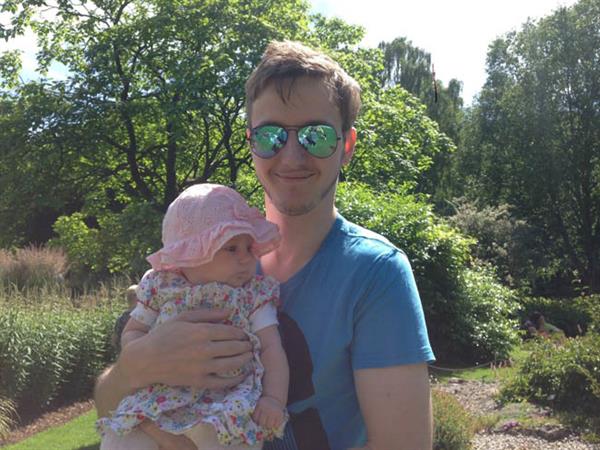