Rory Burke, 40, from Leeds was driving to work when he suffered his first seizure in February 2012. He managed to get home but he then had another episode. He was taken to hospital where a CT scan revealed a mass on his brain which was later identified as an oligodendroglioma brain tumour. In January 2016, a routine CT scan revealed the tumour was beginning to grow again, so Rory opted to have chemotherapy and radiotherapy. He decided to leave his job because of his epilepsy, and to focus on his recovery. Since then, he has raised more than £7,000 for Brain Tumour Research by taking part in cycling challenges and is now swimming for more money.

It was February 2012 when I blacked out one morning while driving from North Lincolnshire to Leeds. I only realised what had happened when I came round and discovered I had mounted the pavement.

“Had I fallen asleep? Or had I suffered a heart attack? I felt disorientated but decided to turn the car around and drive home, as I knew something wasn’t quite right.” 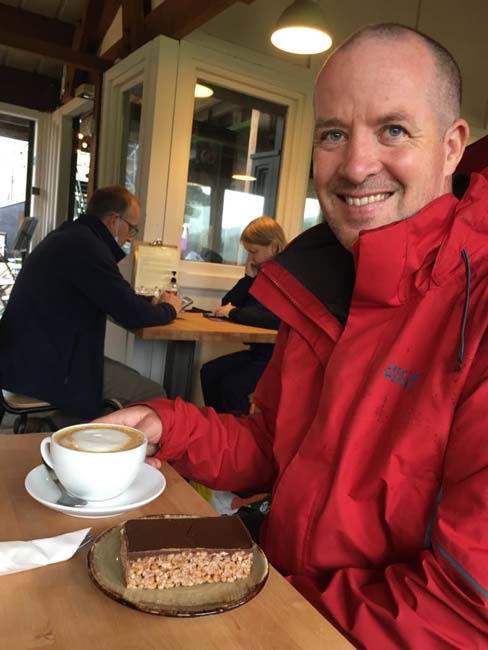 I remember that drive home, I felt thankful that it had happened in a quiet village, as five minutes later I would have been on the motorway and the consequences could have been extremely dire.

When I got home it happened again, but this time I experienced what could only be described as fitting and an ambulance was called. I was in and out of consciousness and the paramedics struggled to control the convulsions. They took me to A&E at Hull Royal Infirmary. 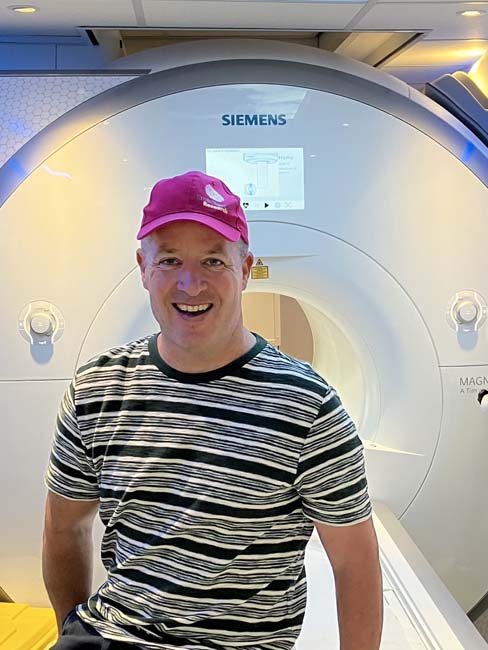 “It wasn’t until a few days later that I woke up, alone and confused in intensive care.”

The doctors said they had carried out a CT scan and had found something they believed was a brain tumour. They also explained that the fitting I had experienced and the black out in the car were in fact seizures. They told me a neurologist at the Royal Infirmary Hospital in Hull would need to run some more tests to get a formal diagnosis.

I’m a very black and white type of person and the news that I had a tumour did shock me a little, but my main emotion was acceptance. I really just tried to stay positive.

“Not everyone who is diagnosed with a brain tumour has options, so when the doctors went through the different treatments available to me, I felt lucky that there was something that could be done.”

The diagnosis wasn’t the only news that changed my life that week. After meeting with the doctor to discuss my results, I found out my marriage was over, and my wife and our six-year-old son left our family home. I was also trying to make sense of how I could continue my work in recruitment, as I was banned from driving due to epilepsy and the seizures. It really was a tough time for me, especially not having a partner there for support.

After more tests over the coming weeks the neurologist felt that surgery would be the best option. As the tumour was close to my motor strip, he advised that I would need to be conscious during the craniotomy operation as this way they could test my movement to ensure only diseased tissue was being removed.

The first operation was scheduled for March 2012, though this was stopped mid-way through as I suffered a full-blown seizure during the operation and was admitted to intensive care to recover. The surgery was rescheduled in April and as I stood there in my gown ready to go in, it was cancelled as there was no spare bed in intensive care. The third time we were successful, and the surgery went ahead. 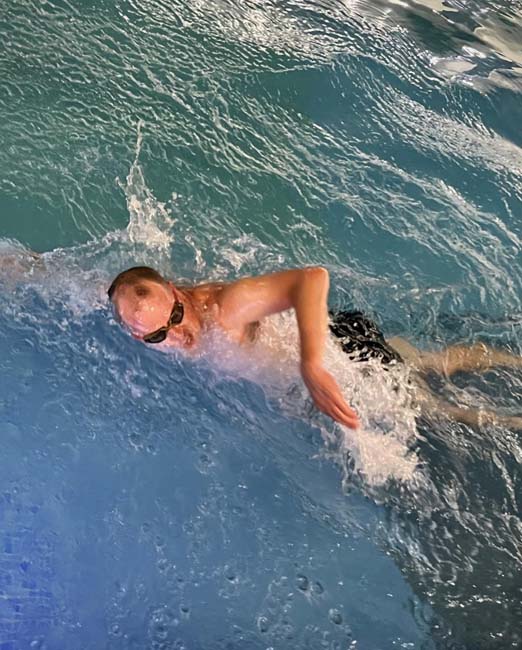 “During the operation I experienced around 15 small seizures as I lay there awake on the table. They asked me questions and checked if I could feel and move parts of my body. It was a very weird experience.”

The surgery went well, and they were able to remove about 80% of the tumour, which was about the size of a golf ball.

Waking up from the operation, alone and a bit drowsy from the drugs wasn’t a nice experience but I was pleased it was over. It immediately dawned on me that I couldn’t move my left arm and I remember being really scared. The nurses tried to reassure me that physio would be the next step and to try and rest. I was also offered chemotherapy and radiotherapy, but as it wasn’t essential chose to hold off, as I had already so much emotionally and physically to deal with.

I found physio tough and frustrating, and I really tried to push myself, as I believed the more effort I put in the better my arm would get.

“Even now, my arm is still weak, but you have to keep fighting the battle and challenge yourself to overcome hurdles.”

In January 2016 a routine CT scan showed the tiny bit of remaining tumour was beginning to grow again so I opted to have chemotherapy and radiotherapy. I was also put on a combination of drugs to help with the seizures, but they still happened sporadically.

I chose not to go back to work and focus my energy on myself and my mental and physical wellbeing. Like so many people nowadays, I sought help from outside my family, not only in helping me deal with the diagnosis and treatment, but also with the other things being thrown at me that I didn’t feel in control of. 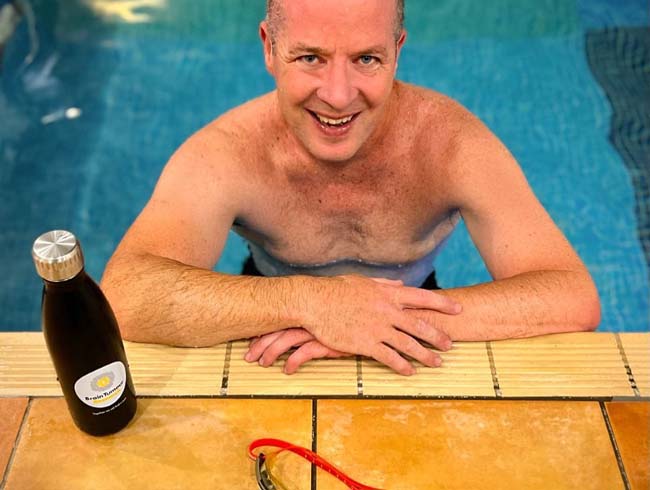 “I would say to anyone that has been diagnosed to make sure that they have someone to talk to and if you need additional external support, don’t be afraid to ask.”

I invited my MP Hilary Benn to the All-Party Parliamentary Group on Brain Tumours (APPGBT). Over time, I think he must have got fed up with me because he now regularly attends, and he also uses his social media channels to support campaigns such as Wear A Hat Day which is great.

“Although I live with a tumour every day, I try not to let it worry me and rule my life.”

I have taken part in cycling challenges and have raised more than £7,000 for Brain Tumour Research. I’m now taking part in the Swim Challenge In August at Nuffield Health in Leeds to raise more money.

After my diagnosis, I started swimming to help with the rehabilitation of my left-hand side. Exercise and physiotherapy have played such a crucial part in both my emotional and physical wellbeing, especially my continued work on my weakened left hand and arm.

Raising money for research into brain tumours is so important because, without research there’s no progress. 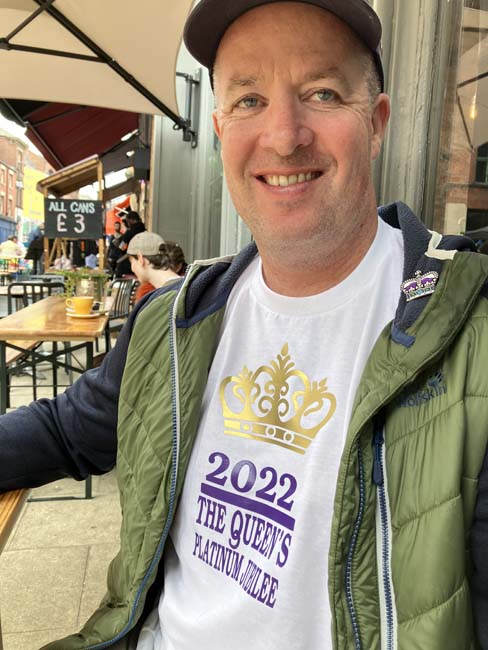