Freelance marine consultant and Master Mariner Paul Potter, from Pembrokeshire in Wales, was diagnosed with a brain tumour in 2012, when he was about to have treatment for prostate cancer. The low-grade meningioma wasn’t related to his cancer but it needed to be dealt with quickly, so his prostate treatment was put on hold while he underwent a craniotomy to remove the brain tumour. A keen cyclist, 65-year-old Paul is now fully recovered and is fundraising to help find a cure for the disease, with a cycling challenge he hopes will also spark conversations about brain tumours.

The first indication that I had a brain tumour came in September 2012.  I didn’t realise it was related to a tumour at the time but I noticed that I was having regular and persistent sharp pains in my head, which were centred just behind my right eye. I had also become sensitive to light. I went to see my GP, Dr Manomi, and she referred me for an urgent MRI scan at Withybush Hospital in Haverfordwest.

“I always say that Dr Manomi’s prompt action saved my life; had she have hesitated to refer me, who knows what the outcome may have been?”

At the time, I was also about to start treatment for prostate cancer and was making regular trips to London, where I was under the care of the Dreadnought Unit at Guy’s and St Thomas’ Hospital. I spent many years working in the merchant navy and the Dreadnought Unit is the continuation of a tradition of special hospital care for seafarers dating from 1821. 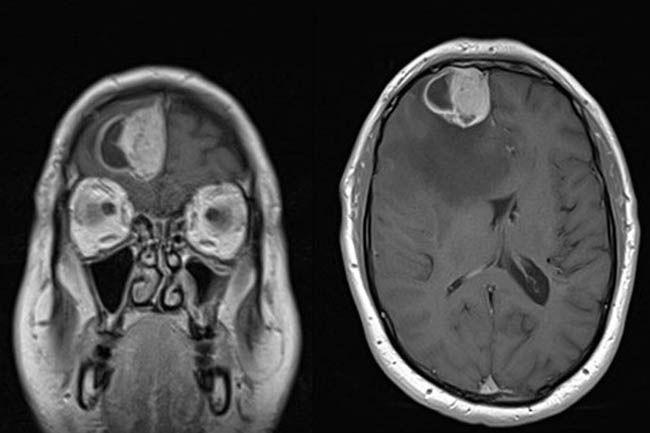 I had the MRI scan in October 2012, just before travelling to Guy’s and St Thomas’ to start radiotherapy. On arrival at the hospital, I was told a decision had been made to halt my treatment, as my scan results showed that I had a golf ball-sized tumour in my right frontal lobe. I decided to call it ‘Timmy the tumour’, in an attempt to inject some humour into the situation and to make it feel less intimidating. 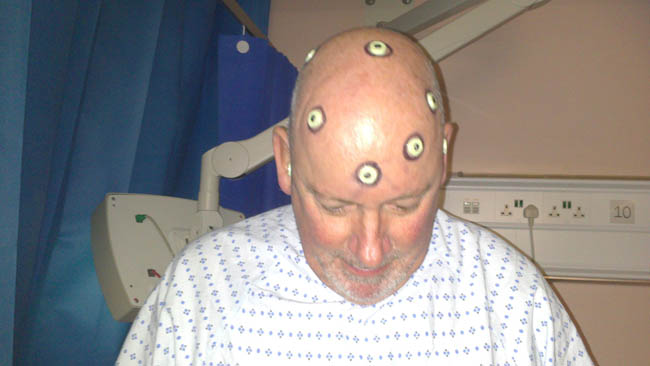 The medics didn’t know at that stage whether the brain tumour was linked to the prostate cancer. Their priority was to remove the tumour, so, I was referred to Kings College Hospital where, on 4 November, I had a craniotomy. I was in the safe hands of consultant neurosurgeon Professor Keyoumars Ashkan for the nine-hour operation. My family were all on tenterhooks and my wife Jo was really upset as she waited anxiously for news. Eventually, at 10pm, I was out of theatre and she was able to come and see me. She talks about the immense relief she felt when she realised that I was OK. 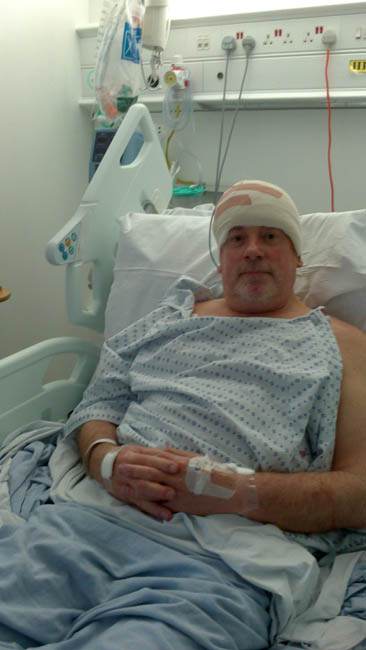 I stayed in hospital for a few days and had a few issues with my wound, as it continued to bleed a lot. I had two black eyes as well and thought I looked like a panda. 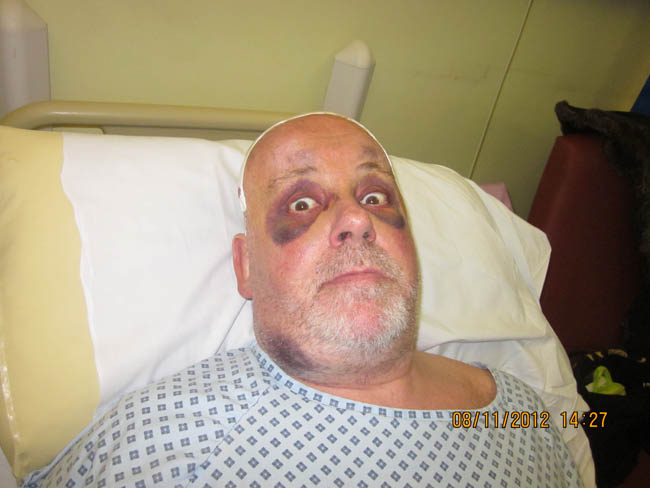 “Four days after my surgery, I got the results from the histology report, which determined that the tumour was low-grade meningioma.” 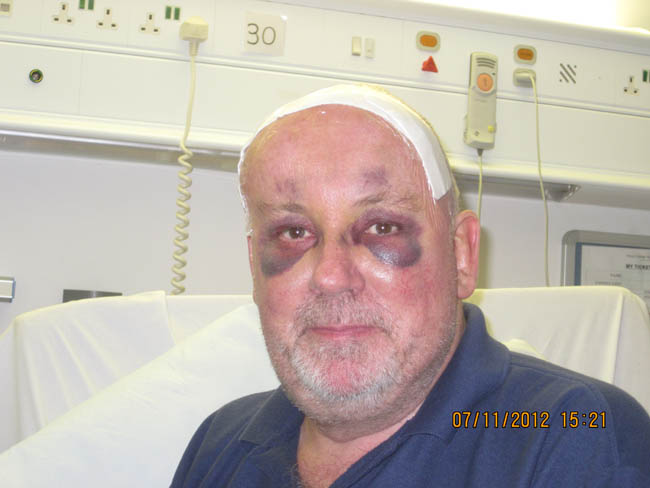 This was good news, not least because it meant that I would be able to resume my prostate cancer treatment once I’d recovered from brain surgery. I stayed at the Simon Patient Lodge at St Thomas’ for another two weeks before I was able to go home to Fishguard. One memorable day during my stay, I decided to head over to the House of Commons in Westminster to listen to the Alternative Vote debate and Prime Minister’s Questions (PMQs). I’d had the staples removed from my head but had been left with an angry-looking scar held together with stitches, which went right across my bald head, so I wore a hat to conceal it. When I got to the Houses of Parliament, I followed other members of the public through a series of long corridors. At the entrance to the gallery of the debating chamber, I was met by a stern security guard, who told me to remove my hat. I said I’d rather not but he was insistent, so I took it off and upon seeing the horror of my huge scar, he told me in no uncertain terms to put the hat back on! 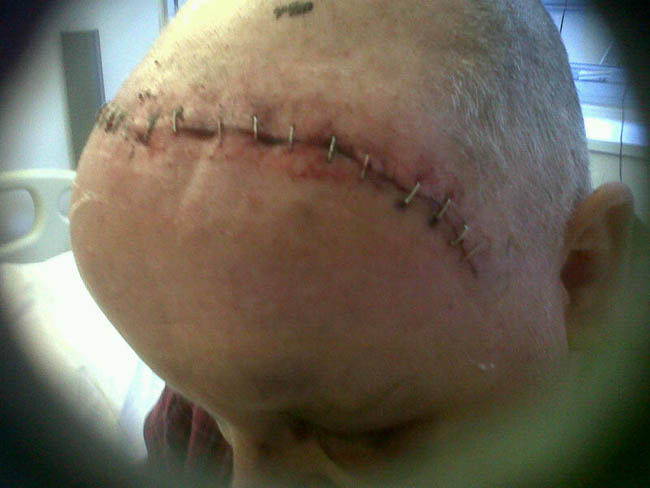 Once home, I was soon able to get back to work and thankfully, didn’t suffer any major long-term effects from the brain surgery. In March 2013, I was able to continue with the prostate cancer treatment. I had 37 sessions of radiotherapy at the Singleton Hospital in Swansea. 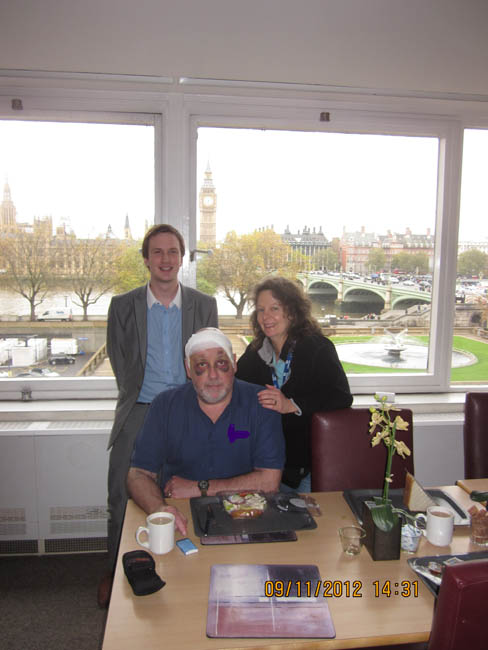 I feel very lucky that my brain tumour was treatable and that the lasting impact of my disease is minimal. I developed a slight speech impediment, which has improved with time and I have quite a visible scar but otherwise, very little damage was done.

“I continue to be scanned every two years and I’m always alert to any symptoms which may signify tumour regrowth but, on the whole, I’ve been in good health.”

I’ve always done a lot of sport to try to stay fit and healthy and within the last couple of years, I’ve got really into cycling. I took it up because I had knee problems, which put an end to my rugby training and martial arts. Cycling is low-impact, which has been really helpful and I’m lucky enough to live in a beautiful part of the country with lots of lovely routes to enjoy.

I was recently very moved to watch a Sky News piece about a brain tumour patient and dad-of-two called Sam Suriakumar, who has been diagnosed with an inoperable glioma. I lost my first wife, Jane, to breast cancer in 2002 when our boys were very young. Jane’s cancer should have been curable had it been understood and acted upon sooner by the medical profession. I am a dad-of-three and also related to Sam’s story, as a father. His story touched me, particularly when he and his wife spoke about the uncertainty of their future and the impact of that on their young family. I consider myself extremely fortunate because my tumour was operable and my scans have remained stable. When I heard Sam was working with Brain Tumour Research on their Stop the Devastation campaign, I read more about the charity’s vision to find a cure for brain tumours and I felt inspired to get involved.

I have signed up to take part in Cycle 274 Miles in August, to combine my love of cycling with a desire to fundraise for Brain Tumour Research. I will be cycling routes around the Pembrokeshire hills, proudly wearing a Brain Tumour Research jersey to promote the cause. I’m hoping that it will spark lots of conversations about brain tumours, so I can explain to people what I’m doing and why. Hopefully, this will motivate people to donate to my JustGiving page. The two cycle clubs I’m a member of – Team Cemais and Preseli Pirates – are supporting my efforts, which is fantastic. When I’m working away at sea, I’ll be clocking up the miles on a static bike in the gym, still wearing my charity jersey to help raise awareness and encourage donations from colleagues. 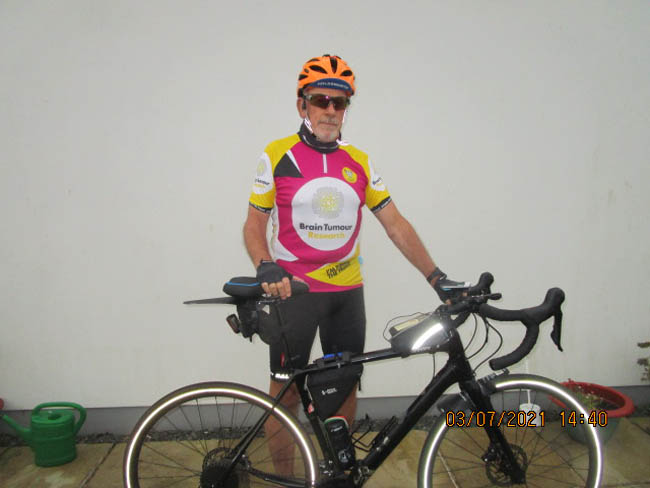 “My wife describes me as a ‘walking (disaster) miracle’ and I’m all too aware that I am one of the lucky ones.”

I was shocked to discover that brain tumours kill more children and adults under the age of 40 than any other cancer... yet historically just 1% of the national spend on cancer research has been allocated to this devastating disease. I’ve set my fundraising target at £2,740, which represents the cost of a day’s research at one of the charity’s Centres of Excellence. I’ll be very proud if I can reach that amount and make a difference to other brain tumour patients both now and in the future.

If you have been inspired by Paul’s story, you may like to make a donation via www.justgiving.com/fundraising/Paul-and-Jo-Potter-BTR or leave a gift in your will via www.braintumourresearch.org/legacy. 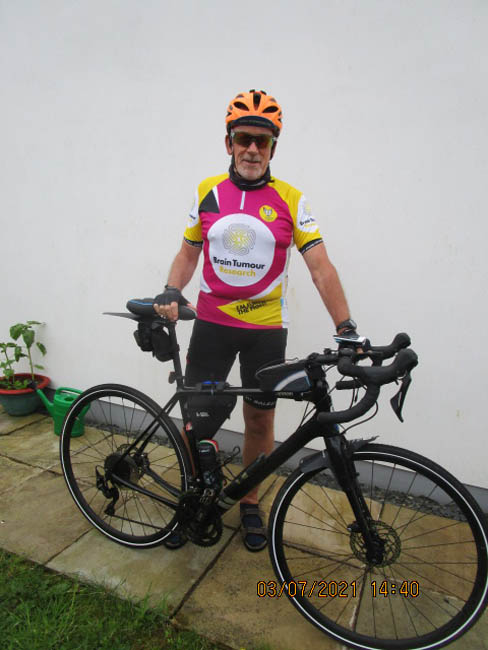