Baby Molly from Flint in North Wales was just 15 weeks old when she was diagnosed with an ependymoma. After noticing a catalogue of unusual behaviours, including multiple seizures, her staff nurse mum Corinne persisted with medical appointments to find out what was wrong. Eventually a drastic change in the size and shape of Molly’s head led to a CT scan at the Countess of Chester Hospital and revealed the devastating news of a mass on her brain. Molly underwent an operation to remove the tumour and, at 13 months old, is nearing the end of an almost 56-week clinical trial to help save her life.

Here is Molly’s story, as told by her mum, Corinne…

As a staff nurse I am in tune with Molly’s diagnosis. Having that medical knowledge has been horrendous because it means when anything changes with her condition I am much more aware.

Molly was born in November 2021 and is my youngest of three girls, Leah is 12 and Kacey is 11. Whenever they see Molly they dote on her, giving her cuddles and kisses.

At just three weeks old, Molly suffered multiple seizures; her body went floppy, her eyes darted from side to side as if she was in REM sleep, and her mouth would smack together. I reasoned with myself thinking she could be tired, but when she woke up and had a third seizure I knew there was something wrong. 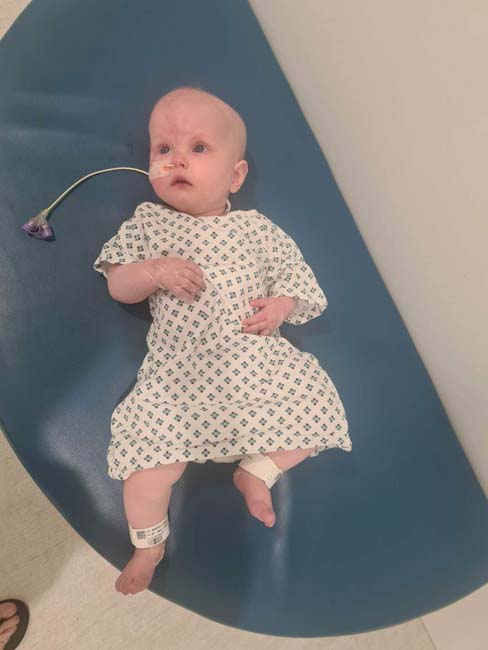 During an appointment with the GP, Molly’s head was shown to be larger than average for her age.

As her symptoms continued, and we got to 23 December I had a list of different traits alongside the seizures she was presenting. They included: the larger size of her head, her eyes gazing at a fixed point to the side, a head tilt, being unsettled, vomiting and she wouldn’t lay flat. For the first few months of her life, she would only sleep in an upright position in my arms, crying every time she was put down as if it was painful. 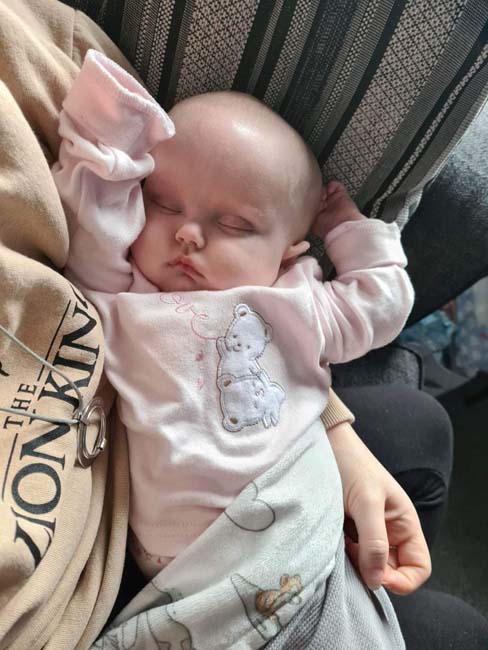 During a routine visit from the health visitor I asked about Molly’s eyes and requested a referral to ophthalmology as her eyes wouldn’t look to the left. I was out of ideas after being told there was nothing wrong with Molly and the next step was getting her eyes checked.

In the meantime, I tried various things to eliminate suspected conditions common with new-borns including a dairy-free diet in case she had cow’s milk protein allergy (CMPA). At a paediatric outpatient appointment Molly was diagnosed with reflux (due to the vomiting), as well as colic. It was suggested we try omeprazole which proved extremely difficult to get hold of. I went to A&E to try and get the medication during which the doctor even commented on Molly’s head being large. 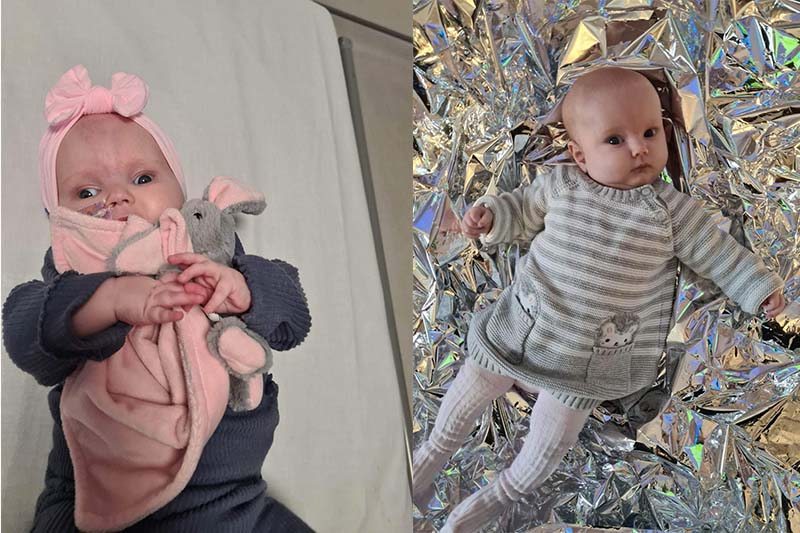 As we entered a new year, both of her eyes had deviated outwards and her head had grown rapidly. On 1 February 2022 I noticed the soft spot on her head was bulging and I took her to the Countess of Chester A&E - her head measured off the charts. An emergency CT scan showed a huge mass on her brain and we were immediately blue-lighted to Alder Hey Children’s Hospital in Liverpool where a neurosurgeon was waiting.

I’d still not seen the image from the scan but was told the mass covered most of the right side of her brain.

“Molly was inconsolable, and doctors were convinced she wouldn’t even make it through the night.” 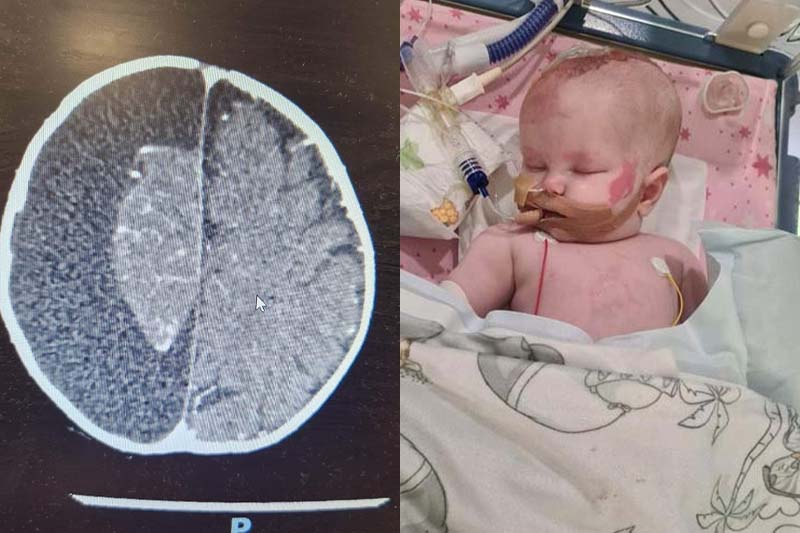 The next day, at just 12 weeks old she had a nine-hour operation to remove the mass during which my mind was racing to worst-case scenario. Surgery helped to relieve intracranial hypertension (a build-up of fluid caused by the mass)

I felt huge relief when told the mass was removed, however the ordeal was far from over.

Molly went straight to the intensive care unit (ICU) and was placed on a ventilator due to full-body volume blood loss.

She was eventually moved to the high dependency unit (HDU) after being vented and sedated. For the first time in her life, Molly laid on her back, staring out of the window, babbling. I was overcome with emotion as for the last three months she couldn’t be put down. It was amazing to see. Especially after being told, had we waited any longer, that would have likely been the last day of her life. 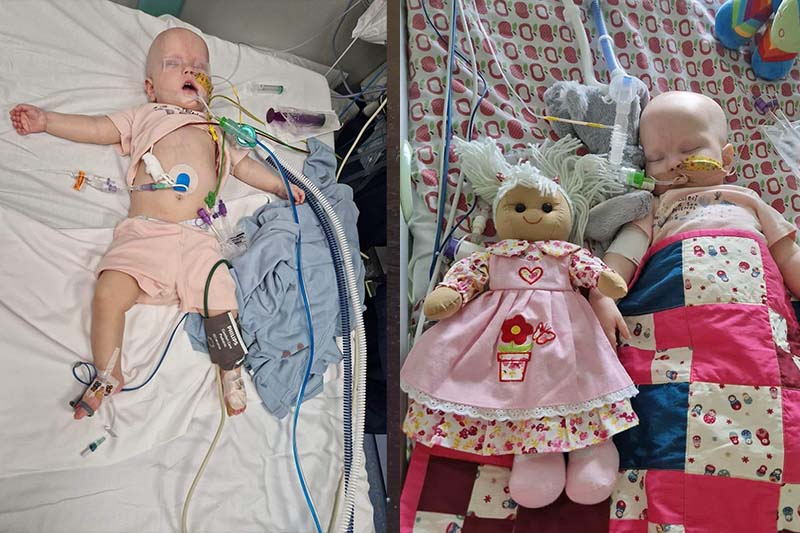 Three weeks after surgery – whilst recovering in HDU, we got the results of the biopsy which confirmed the tumour was a ependymoma and the doctor said if you have brain cancer, this is the one that has a higher survival rate in children.

Molly qualified for an international clinical trial at Alder Hey which was due to last 56 weeks and I was once again warned of life-changing injuries she could suffer.

She could suffer damage to her liver and kidneys, lose her eyesight and hearing and she may become infertile.

You listen to the risks and always think, well that won’t happen to me, but when it’s your child they’re talking about it’s much more scary.

Unfortunately the trial was cut short due to neurotoxicity from a very high dose of methotrexate and hearing loss from cisplatin and carboplatin and what was meant to finish in March will finish this month (January 2023). 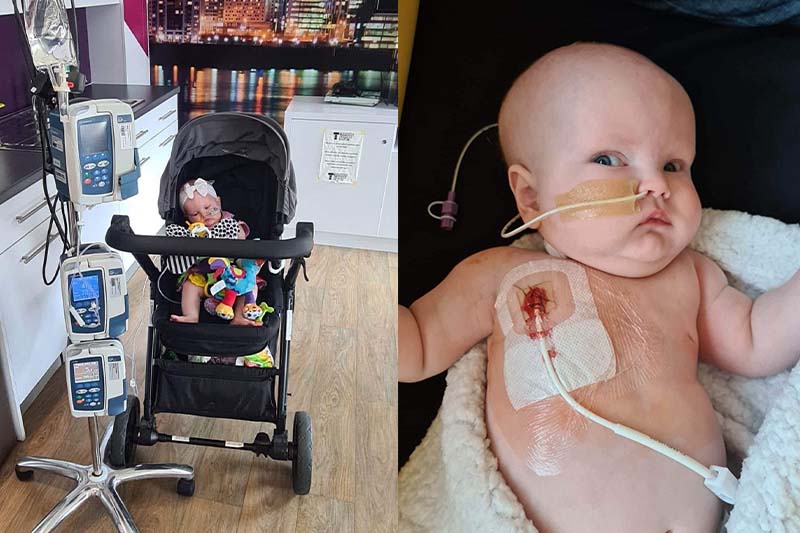 Molly has been fitted for hearing aids and we will get them this month.

According to her oncologist, this cancer can be cured but the evidence is minimal. Her specific cancer – ependymoma - has subtypes that have very different outcomes and behave differently. However, this discovery is recent, meaning evidence and research is minimal. So whilst we have been assured that Molly's outcome is bright, it highlights there is a need for further research into brain tumours.

From evidence I have studied during my time as a nurse, this terrifies me. Despite the risks and uncertainty, she still has a chance and that offers me some relief. She’s recently learned to say ‘Mama’ which makes me smile every time I hear it.

My parents have been an incredible support, helping to look after Leah and Kacey when Molly has needed to go into hospital at short notice, taking on the school drop off and pick-ups. The treatment has caused Molly to develop neutropenia which means her immune system is weakened. 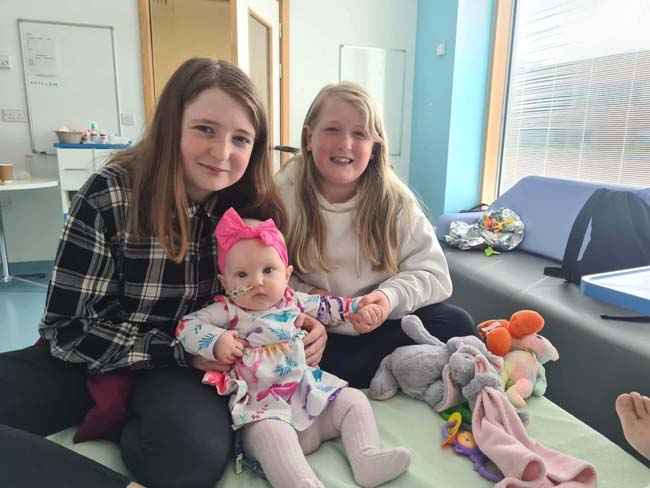 “Molly doesn’t know any different, to her this is ‘normal’ life which is really sad. We need to do more to understand the complexity of tumours as everyone’s journey is different.”

Molly's recent MRI has been clear though and that's after a six-week break from chemo as her bloods haven't recovered enough to continue. She is still having weekly transfusions which was previously every 48-72 hours for platelets and/or red blood cells.

She will likely have MRI scans for the rest of her life as there is a possibility the tumour will return. 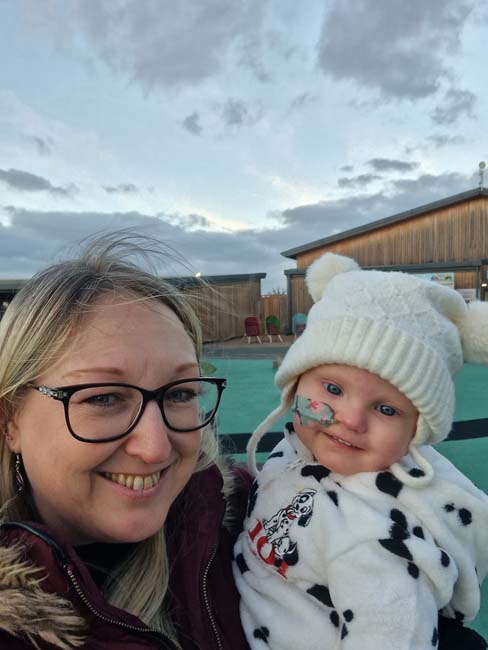 Considering everything she has been through, Molly is a happy baby and gives me lots of smiles and that is inspiring. My girls have been truly wonderful throughout everything and have fundraised for Brain Tumour Research, something they did all by themselves with bake sales and more recently the The One Million Keepy Uppy Challenge.

I’m really proud of my family and hope that we can change the script of brain tumours to allow more families to stay together. 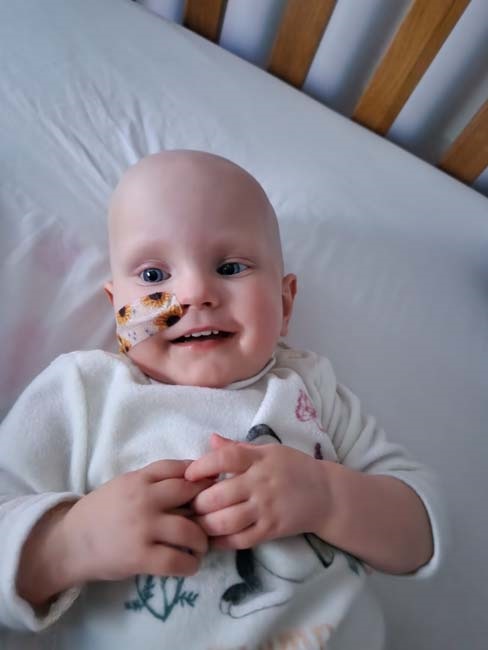