Eight-year-old Katie Paterson, from North Lanarkshire, was diagnosed with a brain tumour in December 2020, after experiencing vomiting, clumsiness and pain in her back. Brave Katie has since been through two surgeries, radiotherapy and is now on a gruelling course of chemotherapy. As COVID-19 restrictions begin to ease across Scotland, Katie and her parents continue to shield, to try to protect Katie while her immune system is weakened, due to the cancer treatment she is receiving.

Katie has suffered from vertigo since she was five and takes medication for it every morning. One Monday towards the end of November, I gave her her medicine and she brought it straight back up. She seemed fine in herself and didn’t have any other symptoms but later that day, we got a phone call from her school to say she’d been sick. We picked her up and over the next few days, she really wasn’t herself. She was still vomiting occasionally and she was really lethargic. By the weekend, she was being violently sick again and wasn’t able to keep anything down. On top of that, she was screaming with pain in her back. We called the out-of-hours doctor and Katie provided a urine sample, which showed there was an infection, so she was given antibiotics. 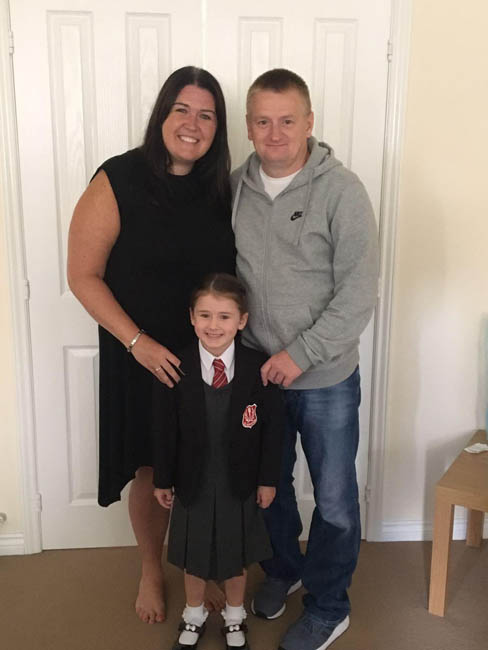 “As Katie’s sickness began to subside, we knew that something still wasn’t right. My husband Graham and I noticed that when she stood up, she would hesitate before walking.”

She was putting her arms out to the side to navigate and she was becoming really clumsy. When I asked her if she felt dizzy, she said: ‘it’s all black around the sides.’

By now, I was desperate for Katie to be seen by a medical professional, so I spoke to our doctor, who emailed Katie’s paediatrician’s secretary. We got an appointment at Wishaw General Hospital on 14 December. Both Graham and I took her but when we arrived, we discovered that only one of us could go in with her, due to the coronavirus restrictions. Graham went in and I sat in the car waiting. I was messaging him and he was saying she was fine; laughing and joking around. My dad lives close to the hospital, so Graham suggested I went over there to sit with him in his garden while I waited for them. I headed over to my dad’s and a little while later, I got a call to say they were going to do a full blood count and then a CT scan. I remember feeling pleased that they were ruling out anything serious.

“Later on, however, Graham called again saying that they wanted me to come up to the hospital. They had the results from the scan but they didn’t want to give them to Graham without me there as well.”

I rushed back to the hospital and we were given the awful news that the scan had revealed a tumour at the back of Katie’s head. It was so big, it had completely blocked the flow of her brain fluid, which was causing pressure on her brain. She was suffering from hydrocephalus and had to be blue-lighted immediately to Queen Elizabeth University Hospital in Glasgow.

I felt complete numbness. The fear that came over me was like nothing I’d ever felt before. It was like I was living somebody else’s life. Thankfully, the team looking after Katie was magnificent. They had to have some really difficult conversations with us but they were professional and compassionate. It was only when she was taken down to theatre the next day that Graham and I were able to stop and take a big breath. But that was also the point at which we began to digest the severity of the situation. Katie’s consultant, Mr Meharpal Sangra, couldn’t tell us what grade the tumour was but he explained the severity of where it was sitting. We began to prepare ourselves for a long and difficult road ahead.

Katie’s first surgery, on 15 December, was a procedure to insert an external ventricular drain (EVD) to relieve the pressure in her head. It went well and almost immediately afterwards she was like a different person. She was vomiting much less and she seemed a bit more like her old self. She had an MRI scan the next day and afterwards, the consultant met us to talk about the results. He encouraged us to look at the scan images, recognising that it may not be easy to do so. He said he needed us to understand the next steps, which would be a craniotomy to debulk the tumour.

Katie’s second surgery was on 18 December. She went into theatre at 9am and was out 10.5 hours later. At 5pm, we got a phone call to say they’d scanned her and there was still some tumour left, so she’d gone back into theatre and she wasn’t out and in recovery until 7pm. When we approached the recovery room, I wasn’t sure I could bear to go in and see her, in case she didn’t respond. We’d be made aware of all the significant risks of her surgery and I was terrified. Thankfully, we saw the anaesthetist first and he/she said that Katie was shouting for me. She was very vocal and angry but that was a good thing. She had also been drinking juice, which again, I knew was positive.

“Katie got through the surgery relatively unscathed. It was such a relief. She spent one night on the intensive care unit (ICU) and was back on the ward the following day.”

On Christmas Eve, however, we were told that the surgery alone wouldn’t be enough. A team of people, including an oncologist, met with us to discuss the results from the biopsy and the next steps. Although Mr Sangra had removed all the tumour, the histology confirmed that it was a medulloblastoma and Katie was facing another 10 to 12 months of cancer treatment. I don’t think I really took it all in. The medics outlined a rough plan and I went into ‘practical mode’. If I know there’s a plan, I’m OK. Graham, on the other hand, was really emotional and upset.

What I knew I couldn’t do, was to tell Katie the news myself. Nor could Graham. We put the onus on them to tell Katie, as we wanted to be the ones to pick her up again when she was upset, not the ones to deliver the difficult news. They arranged for two people from The Beatson - West of Scotland Cancer Centre to come over and talk to Katie about ‘bad cells’ and why she would need radiotherapy and then chemotherapy. Katie’s an anxious wee girl at the best of times, even before all of this. They were very nice and managed to explain everything in a sensitive and reassuring manner.

Katie was discharged from hospital on 30 December and her six-week course of radiotherapy at The Beatson started on 18 January. Jill Scott and the team of radiographers, anaesthetists and nurses who looked after Katie went above and beyond daily to ensure she was happy and comfortable. At home, we were shielding and so they became almost like our family and were an amazing support. Katie built up a great rapport with them and would actually look forward to going in for treatment each day. Katie’s last day of treatment was on her birthday. The team organised a lovely Disney princess party for her to mark the end of treatment. It was amazing! 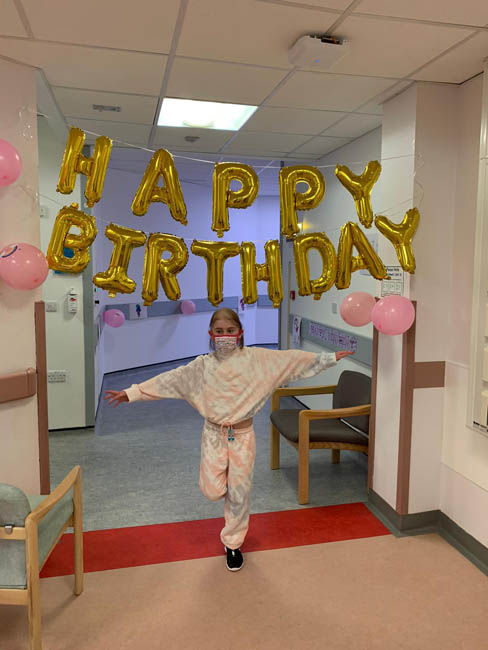 “Other than some hair loss, Katie didn’t suffer too badly from the side effects of radiotherapy. She was home every afternoon to do home-schooling. She breezed through it.” 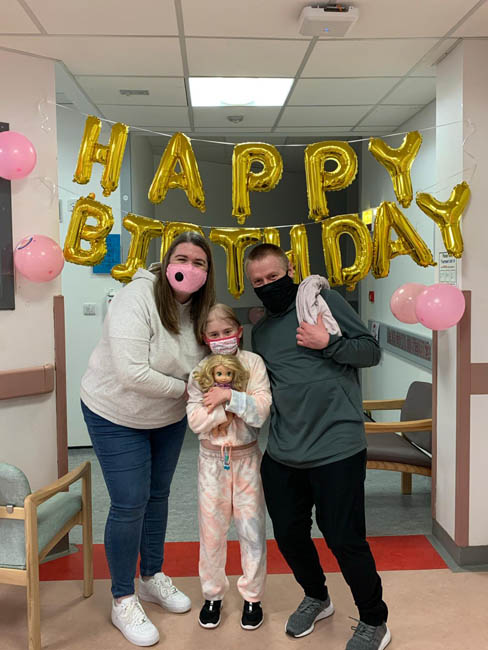 Katie’s post-radiotherapy MRI scan showed that there was ‘something’ in the cavity where the tumour was, that they’re keeping an eye on. She started chemotherapy on 12 April and it’s not predicted to finish until Christmas 2021. She is spending a lot of time in hospital, as an outpatient, and the treatment regime is hitting her really hard. It’s much tougher than the radiotherapy. The chemo makes her sick, exhausted and is causing aches and pains all over her body. She’s lost her appetite to the point that she now has to be tube-fed. 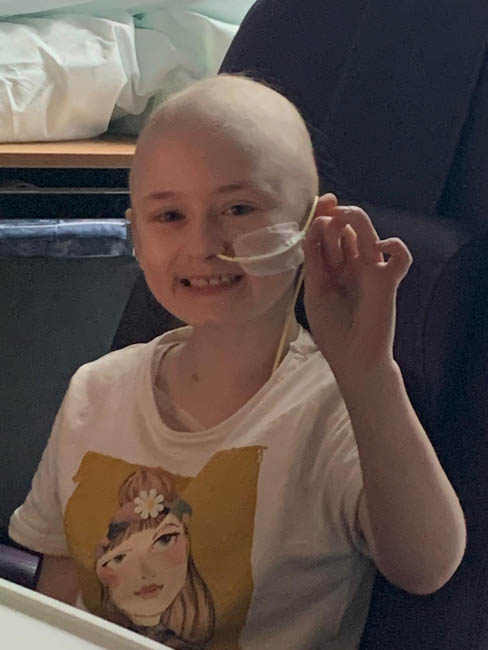 Graham and I count our blessings that we have really supportive employers. We are also extremely lucky to have an amazing community around us. Without them, I don’t think we’d still be standing. Katie’s story has touched so many people and they’ve responded with an outpouring of love and offers of help. Our church, ONE Church Scotland in Coatbridge has been wonderful, as have our family, friends, colleagues, neighbours and even people we’ve never met but who have heard what we’re going through. One day we came back from hospital to find Katie’s friends had left little hand-written notes for her outside the front of the house. Every house in our street is displaying a yellow heart in the window; an indication that they are thinking of Katie. We’ve been so touched by everyone’s kindness. 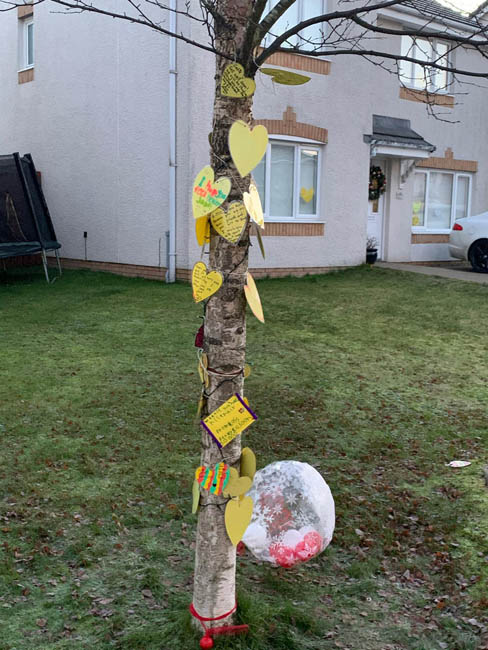 “In March, Clarkston Primary School, where Katie is a pupil, raised £1,800 for Brain Tumour Research, by taking part in Wear A Hat Day. Katie’s teachers have been amazing and this was such a lovely gesture.” 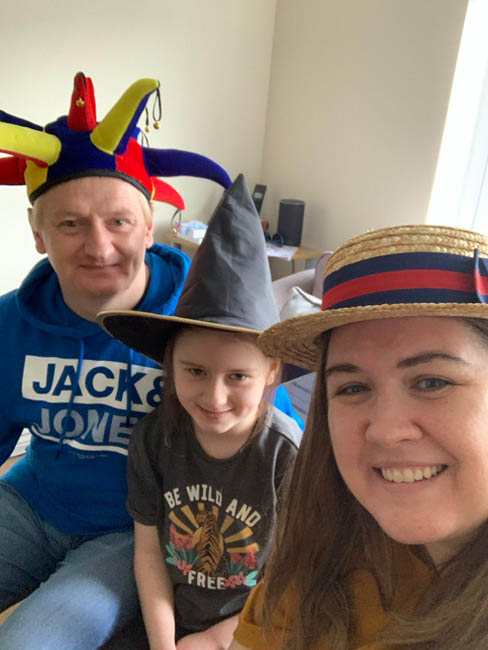 Meanwhile, Katie’s treatment continues and the three of us are just trying to take things one day at a time. The advice on shielding has been confusing, since the COVID-19 restrictions began to ease across Scotland. Katie’s doctors are advising us to make sensible decisions and continue being very cautious. We’re still not going to other people’s houses or having people visit us inside the house. We are our own little bubble. It’s been really tough for Katie, as she’s so desperate to see family and friends and to be a ‘normal’ eight-year-old girl. She wants to have play dates, go to school and do after-school clubs like her pals but for now, she’s not able to. Family have been doing window visits. They come with their masks on and chat to Katie from a safe distance. Facetime is a wonderful thing too and she has been attending school and brownies via Zoom. Dealing with this terrible diagnosis and Katie’s treatment during a global pandemic has definitely added to the challenges. 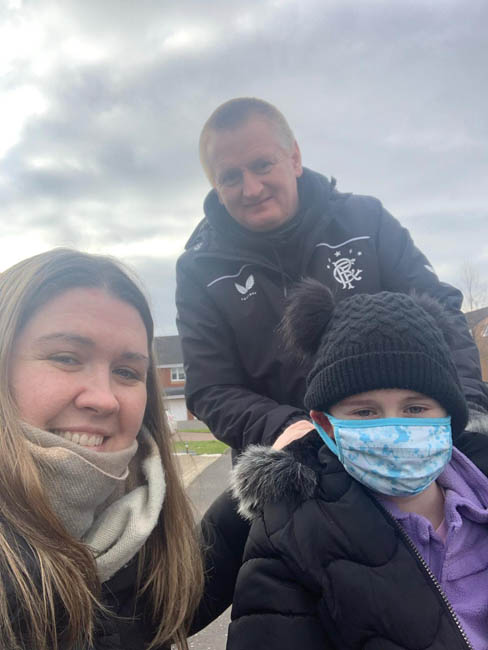 “Katie’s next MRI scan in June. We hope and pray that the treatment is working and that it will give us some positive results.”

Last month, I was delighted to read the news that Professor Silvia Marino and her team at the Brain Tumour Research Centre of Excellence at Queen Mary University of London could see a breakthrough in the way that children with medulloblastoma are treated in future. The idea that scientists are developing new, targeted treatments for patients like Katie offers much-needed hope. I’ve done a lot of my own research into the disease and was shocked to discover the lack of funding into brain tumours compared to other cancers. I signed the Brain Tumour Research petition and have encouraged everyone I know to do the same. I have to do everything I can to ensure Katie and other young brain tumour patients like my daughter have the bright futures they deserve. 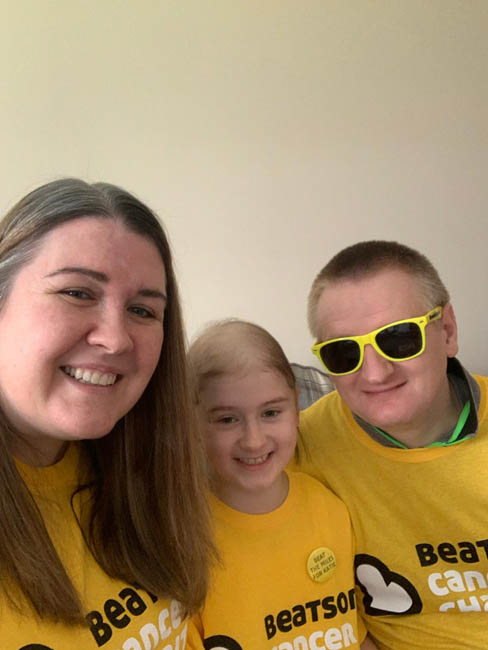 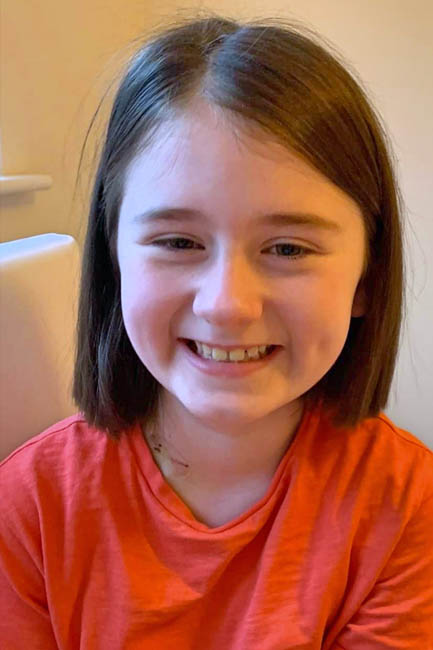