Joshua Cullen was just 24 years old when, on Christmas Eve 2020, he was diagnosed with an aggressive brain tumour. The DHL operations agent was at work at East Midlands Airport when he suffered a seizure, which led to his devasting diagnosis. Joshua, from Swineshead Bridge near Boston in Lincolnshire, has had brain surgery, radiotherapy and is now on chemotherapy, to try to prolong his life.

I first noticed something was wrong in September 2020, during a medical examination I was having for my job at DHL. As the medic took my blood pressure, the whole right side of my body went numb. A few days later, I went to see my GP to get it checked out. He did some routine tests and assessed that I had a weakness on my right side. He instantly referred me for an MRI scan at Pilgrim Hospital in Boston.

When I arrived at the hospital, however, a doctor told me that my case wasn’t urgent and that I should come back two days later for a CT scan. I went home and then, on 16 September, I returned for the CT.

“Ten minutes or so after my scan, the doctor came to see me and said they’d found nothing of concern and that I was free to go.”

Fast forward two months and I was at work on 21 December when, all of a sudden, I felt the right side of my face drooping. I thought I might have been having a stroke. My right arm seized up and then began shaking uncontrollably. One of my mates later told me he initially thought I was doing a weird dance. When it became clear that I was having some kind of a seizure, my colleague held me as I fell to the ground. I don’t remember anything else after hitting the floor. An ambulance was called and the paramedics took me to Queen’s Medical Centre (QMC) in Nottingham. They did a CT scan and a couple of MRI scans, including one with dye contrast and I was kept in overnight. I was discharged on the afternoon of 22 December and two days later, on Christmas Eve, I received a phone call from a neurology nurse called Helen, who told me I had a primary brain tumour in my parietal lobe.

“My reaction was one of complete shock, especially having been given the ‘all-clear’ after my CT scan three months previously.”

I had to let my family know; my mum Magdi, dad Jerry and my sister, Maria. I was living in Long Eaton in Derbyshire at the time. My family came over to see me and we did our best to support one another and tried to enjoy Christmas, in spite of the terrible news I’d received.

Just after Christmas, I was invited for my first appointment with the consultants at QMC. I met my neurosurgeon, Professor Stuart Smith, who explained that he would be operating on me alongside his colleague, neurosurgeon Shazia Javed. Shazia talked about the different types and grades of brain tumours. Although she said they wouldn’t know for sure what type my tumour was until they carried out a biopsy, the MRI scan images suggested it was aggressive. When she began to talk about a possible prognosis, I became very upset.

My surgery, a craniotomy to try to debulk the tumour, was on 7 January 2021. Before my operation, I was given Gliolan or ‘pink drink’, known as 5-ALA. The relatively new medicine helps identify brain tumours by causing them to glow pink under ultraviolet light. I was able to benefit from 5-ALA after the NHS rolled it out as a part of their support for the  Tessa Jowell Brain Cancer Mission (TJBCM). It tasted unpleasant – like gone-off lemonade – but I knew the huge benefit was that it would make it easier for the surgeon to avoid healthy brain tissue.

After my operation, Professor Smith said it had gone ‘really well’ and that he had managed to get around 90% of the tumour out. I felt OK afterwards, other than experiencing a bit of a sore throat and headache. I was well enough to be discharged on 10 January and I moved out of my flat in Long Eaton, to go back home to Lincolnshire, where I knew I’d be well looked after by my parents. 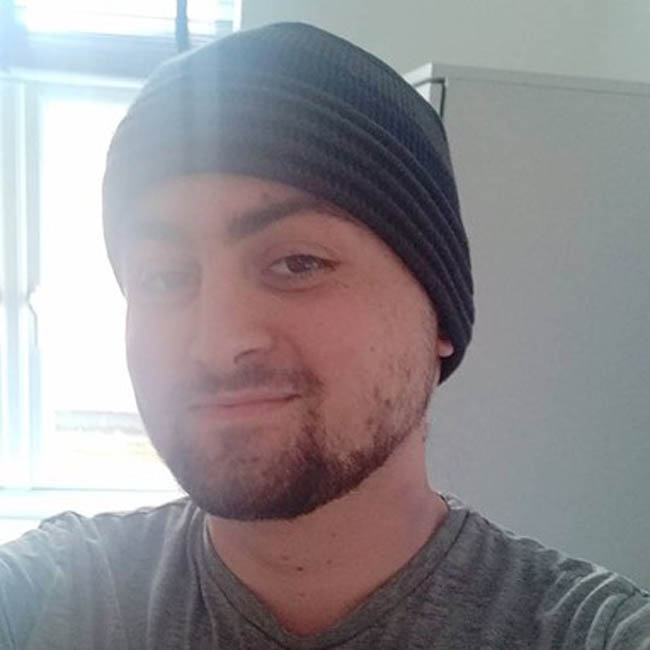 “On 15 January, I got a phone call from my nurse, Helen, who had the results from the histology report. It was bad news; a grade 4 glioblastoma multiforme (GBM).”

I had tried to avoid doing too much research on brain tumours up to this point but after I received this diagnosis, I read into it a little bit. I soon realised the stark statistics surrounding GBM, so again I steered away from doing too much ‘googling’. A few days later, I heard from consultant clinical oncologist Dr Karen Foweraker at Nottingham City Hospital. She explained that she would be my main clinician for the next stage of my treatment: six weeks of radiotherapy and concurrent chemotherapy. I went in to get my radiotherapy mask moulded and my daily treatment began in mid-February. 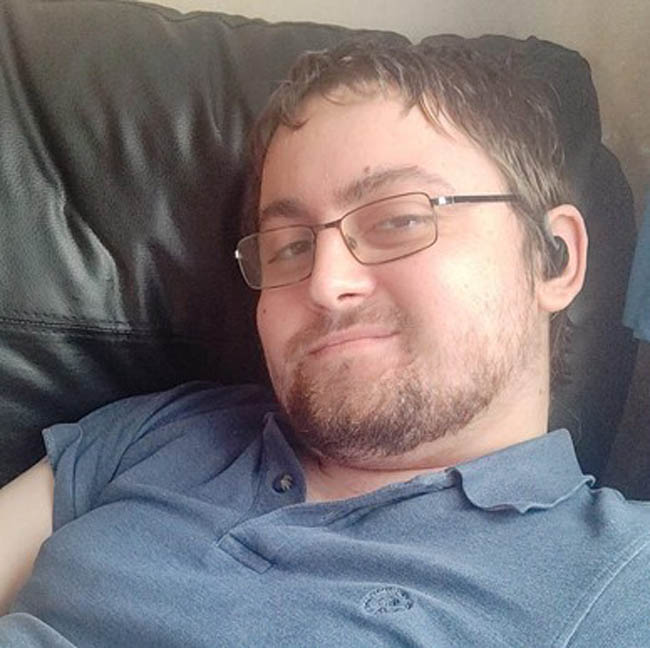 We met a social worker from the charity Clic Sargent, who arranged for me to stay at Billy’s House in the centre of Nottingham. The special provision is a home, where families can stay while visiting children undergoing cancer treatment in hospital and it meant we avoided the three-hour round-trip between QMC and home. I stayed there during the week, then would go home at weekends. The whole experience was fine. I got to know the receptionists, radiologists and some other patients and we got on well. 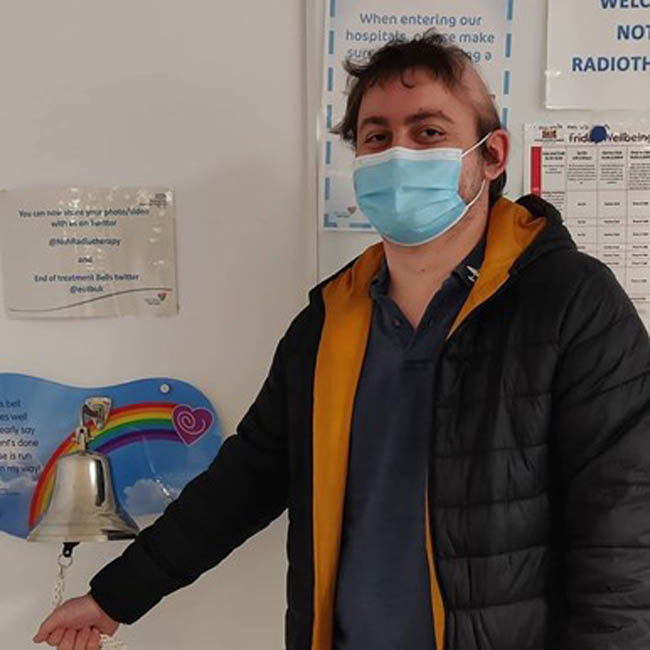 I had a month’s break after the radiotherapy before I started a stronger dose of Temozolomide (TMZ) chemo, which is taken in tablet-form. On the lower dose, I felt OK but now I’m on a higher dosage, I’m having to take anti-sickness tablets. One morning, I was so ill, I couldn’t even keep toast down.

“Life has changed a lot since my diagnosis. I’ve had to surrender my driving licence and cannot work at the moment.”

I’m on Universal Credit, which is allowing me to get by and contribute to the household.  My mum used to work as a self-employed delivery driver. She was contracted to a single company, which required her to work away from home Monday to Friday. Since I was diagnosed with the brain tumour, it became impractical for her to continue in that role. She’s found new work doing early-morning online delivery packing for the supermarket Iceland. It’s more convenient but she’s taken a pay decrease too, so we’re all having to tighten our belts.

I’m managing to stay really upbeat and positive, in spite of what I’m going through. It helps that everyone around me, my friends and family, have been so supportive.  I’m categorised as ‘clinically extremely vulnerable’, which means I’ve been able to have my first COVID-19 vaccination, although frustratingly, I had to jump through quite a few hoops to get it.

At the moment, while the chemo continues to take its toll, I’m trying to rest as much as possible, while finding things to occupy myself at home. I enjoy plane-spotting and like to take photos of aircraft flying over. I have two cats to keep me company and I spend lots of time doing jigsaw puzzles and playing on the X-box. There are plenty of times when I’ve completely forgotten what day of the week it is, as my usual schedule has gone out of the window and one day tends to roll into the next. I live life appointment to appointment, my next big one being my post-radiotherapy MRI scan, which is due on 14 June. 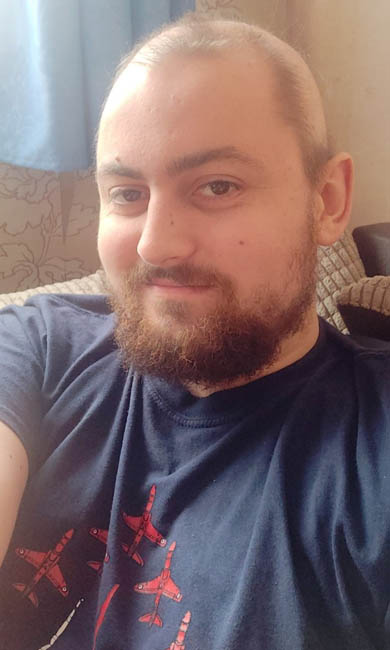 In the meantime, I’ll carry on trying to take everything in my stride. As we slowly emerge from the coronavirus pandemic, at least I’m able to get out and about a bit more. My parents and I recently enjoyed a trip to visit my sister Maria in Kent, where she lives with friends. It was lovely to see her and to go to the seaside. I’m looking forward to more travelling, days out and trips to the cinema, now that the restrictions are lifting. I intend to make the most of every day. 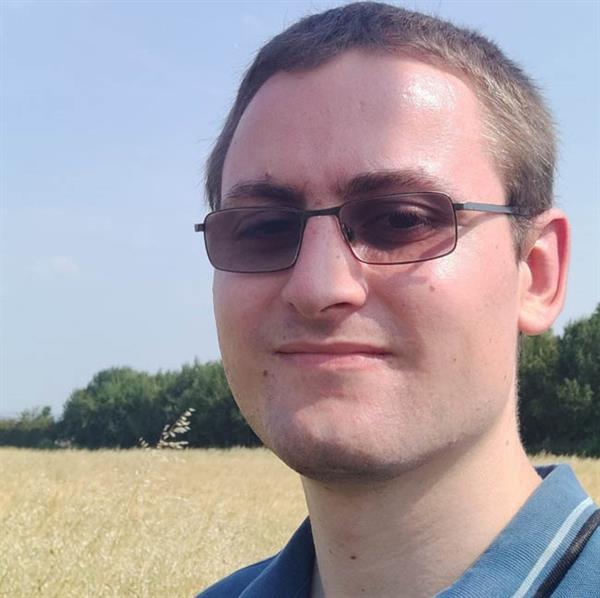