For first-time parents Stephanie Day and James Devlin, it was devastating to be told their new-born baby George had a brain tumour. ‘Gorgeous George’ underwent a nine-hour craniotomy when he was just 10 weeks old and is now a healthy and happy little boy. His mum Stephanie, 27, who was shocked that someone so young could be diagnosed with such a serious condition, is keen to raise awareness of the disease.

Here is George’s story, as told by his mum Stephanie…

Before George was diagnosed with a brain tumour, James and I naively thought the disease didn’t affect people at such a young age. But unfortunately, it does; even precious babies. It was heart-breaking to see our new-born go through such trauma and now I thank my lucky stars that he survived the ordeal.

During our stay in hospital I spent many nights at George's bedside searching the internet for positive stories to bring us hope. I couldn’t find many examples of babies being diagnosed with a brain tumour, so decided to share our story, to help raise awareness.

George was born in January 2018 and, due to complications during labour, he was delivered via ventouse and forceps. As a result, he was left with severe swelling to his head. 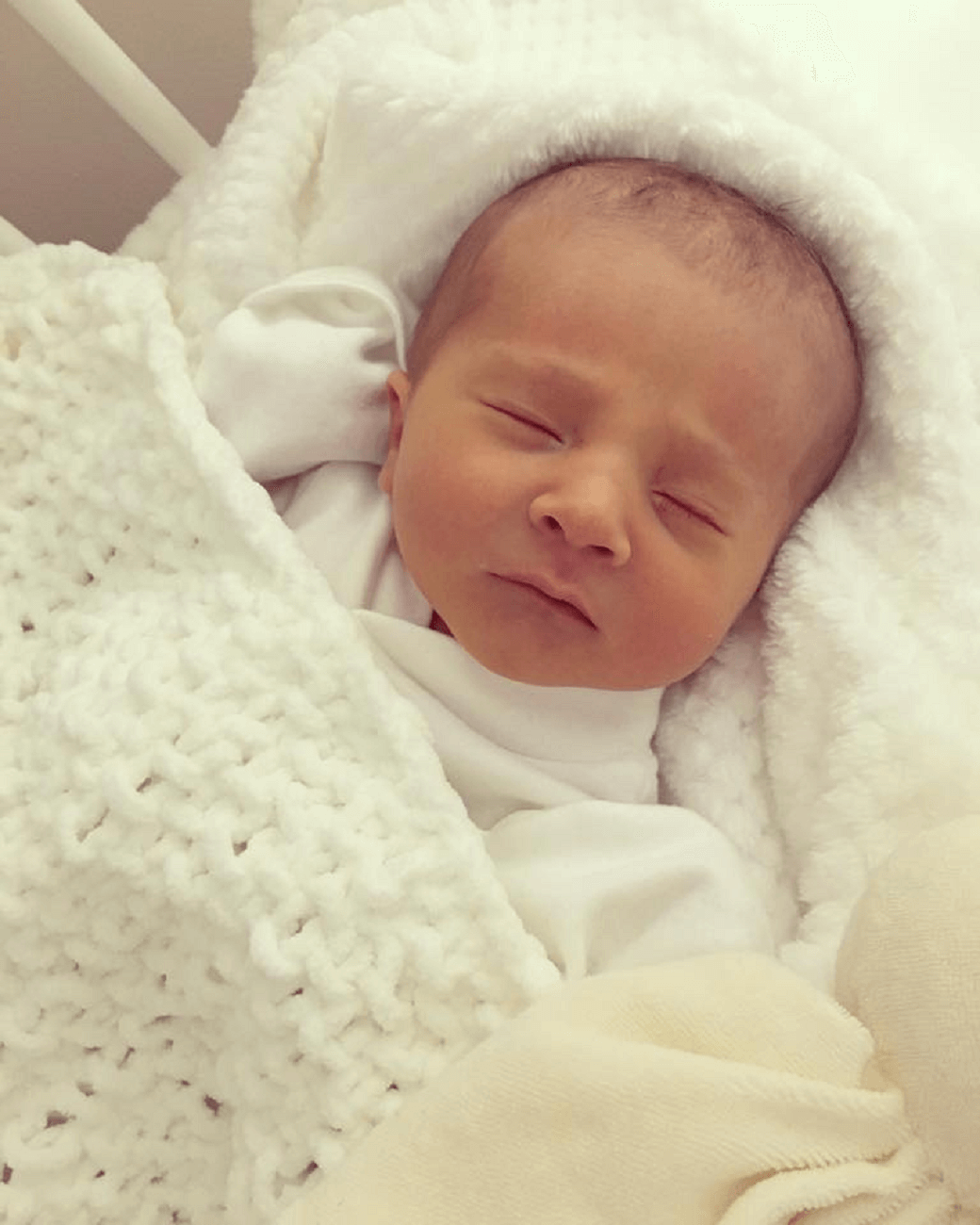 After six weeks, the swelling had reduced considerably on one side of George’s head, however the right side was still very swollen and appeared to be changing shape. James and I mentioned this to our GP and were told that it would go down in time and to go back in a few weeks if we still had concerns.

“We thought we were being overly paranoid as George was our first-born and tried not to worry too much.”

A few weeks later, we noticed that George’s eye movements were different; he would look down a lot and appeared fixated on certain objects. It wasn’t until George’s eyes became sunset, meaning he was unable to look up, that we knew something was seriously wrong. I rang my doctor’s surgery and explained George’s symptoms and that his head was still very swollen from birth. I was booked in for an appointment the next morning. 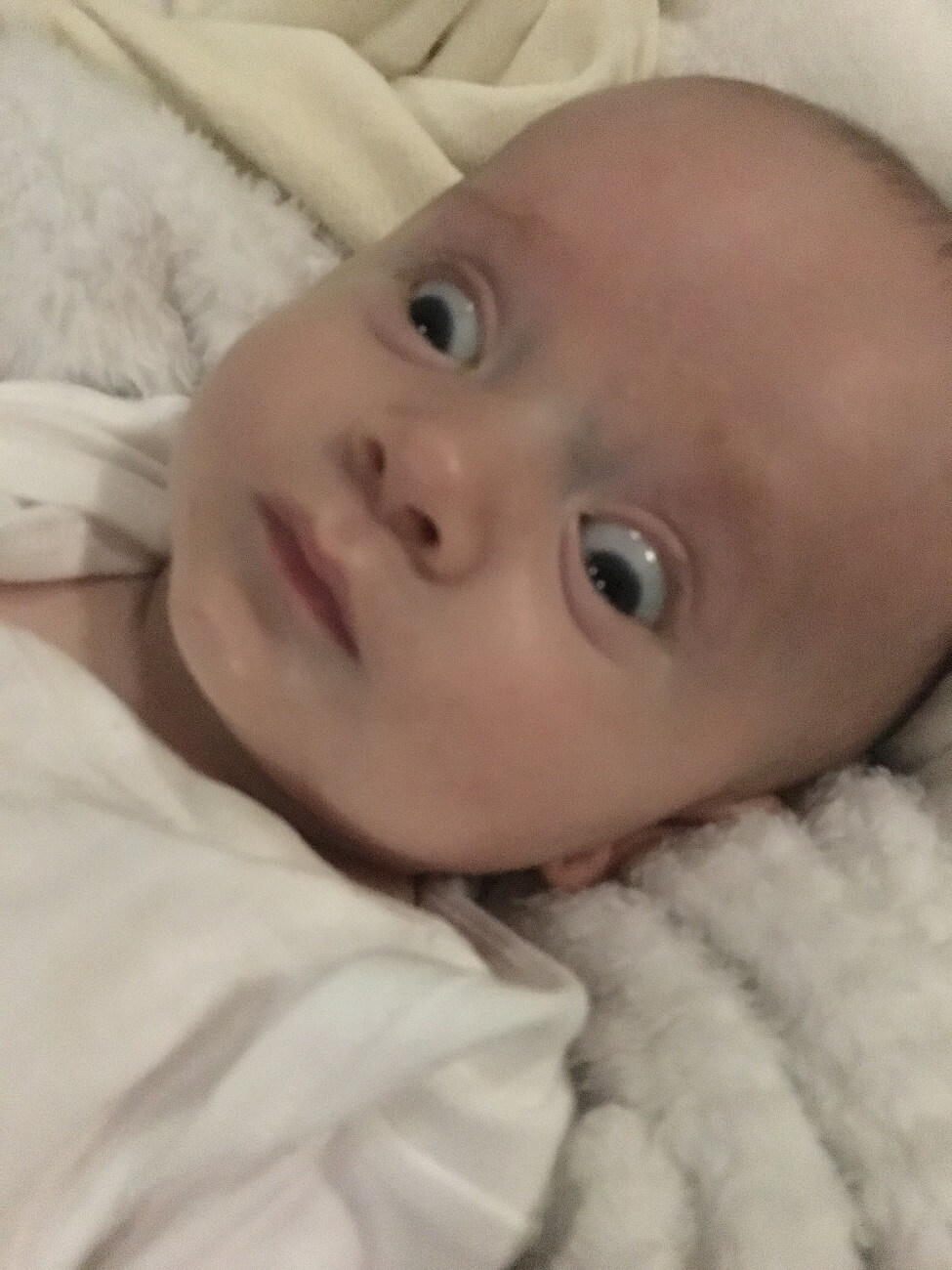 “My mother’s intuition kicked in and instead of waiting overnight I took George straight to a clinic in Plymouth for a second opinion. The health visitor had never seen symptoms like George’s before and immediately referred us to Derriford Hospital’s Children’s Assessment Unit.”

George had a CT scan at the hospital which revealed a ‘growth’ on his brain. I wasn’t sure what this meant and it didn’t cross my mind that he had a brain tumour.

We were rushed by ambulance to the Bristol Royal Hospital for Children and when we arrived, we were taken to the high-dependency unit for overnight observations. George had an MRI scan the following morning and later in the afternoon we were given the heart-breaking news that the ‘growth’ was in fact a brain tumour.

“Our initial worry was would our little boy survive this, but we were given hope by the wonderful medical staff in the NHS. That’s why we are sharing our story, to bring hope to any parent who finds themselves in a similar situation.”

George’s eyes were now deeply sunken due to the pressure in his head and he underwent emergency surgery to fit an Ommaya reservoir, a type of catheter to drain the fluid that had built-up on his brain.

A few days later, George had a nine-hour debulking surgery which would also determine whether or not his tumour was cancerous. It was upsetting that someone so small and precious had to undergo such a long procedure. James and I signed a consent form which highlighted the risks of the operation and we dreaded to think of what could go wrong.

George survived the surgery and thankfully didn’t appear to have any lasting side-effects. I took a picture of James holding George in recovery and this is one of my favourite photos. A biopsy of the tumour confirmed it was low-grade and these were words we longed to hear. The tumour was a choroid plexus papilloma. Pleased that George didn’t require further treatment, we were one step closer to returning home and getting back to normality. 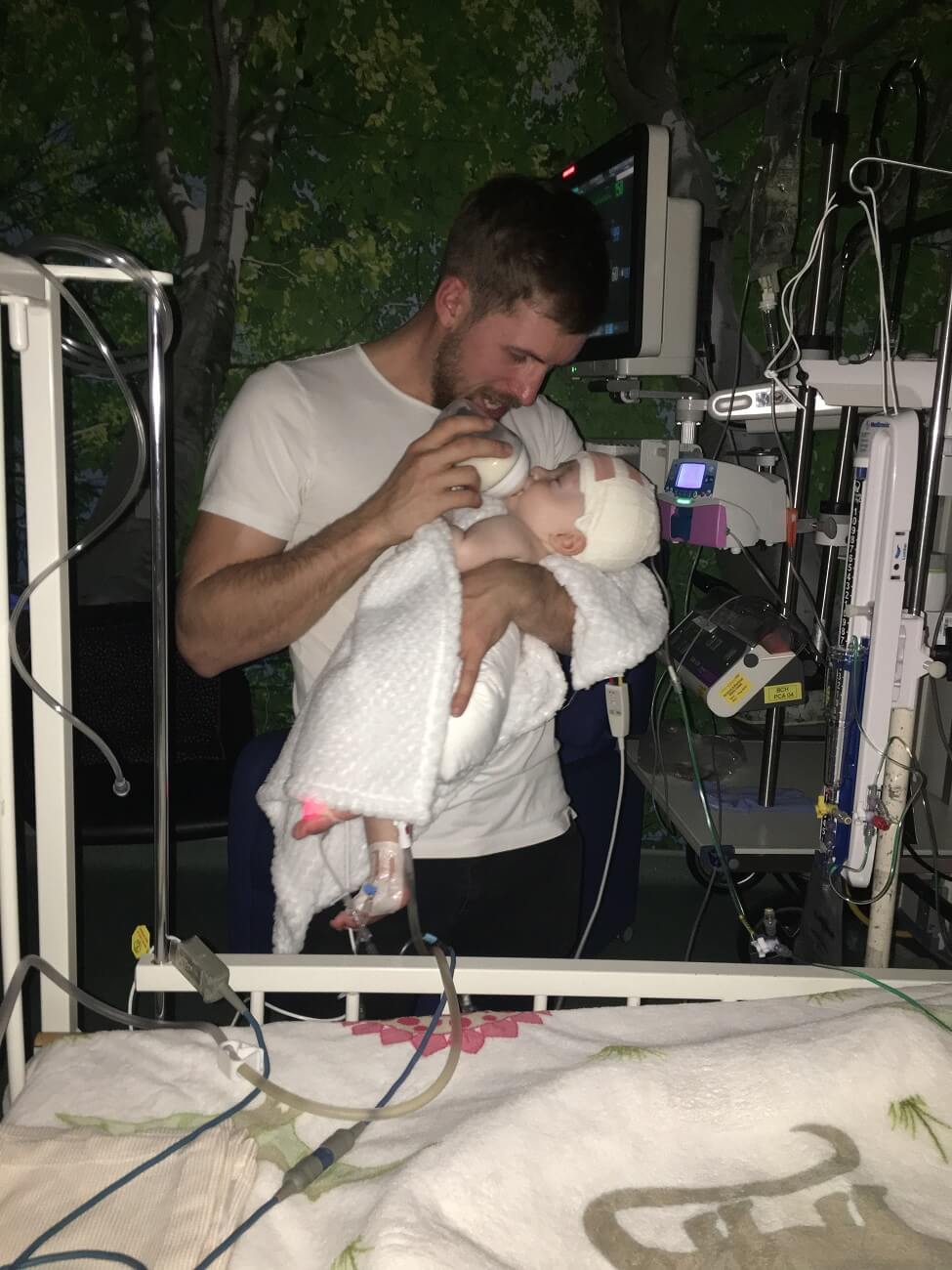 George suffered five seizures while recovering from surgery which were concerning, but these stopped over time.

“George is now 18 months old and he is beautiful, happy and healthy. He has regular appointments and scans which he takes in his stride. We aren’t aware of any side-effects from the treatment but there are still lots of milestones for George to meet and we’re taking each day as it comes.” 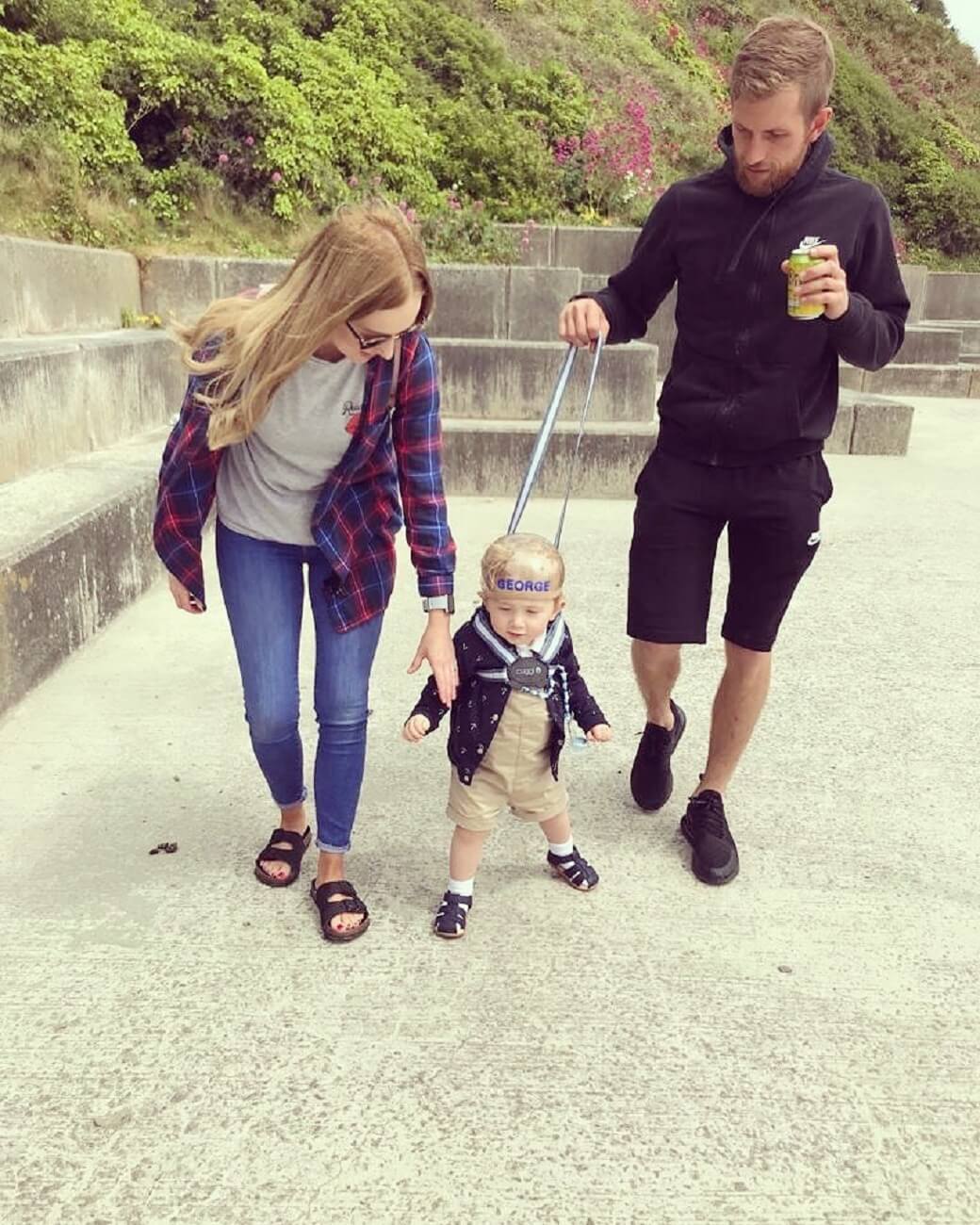 For nine months, George wore a plagiocephaly helmet to correct his head shape. He wore it for 23 hours a day and it was only removed when he had a bath. Members of the public often stared at the helmet and asked us questions, so we decided to make light of the situation and decorated it throughout the seasons. This included poppies for Remembrance Sunday, bunny ears at Easter and a bat at Halloween. 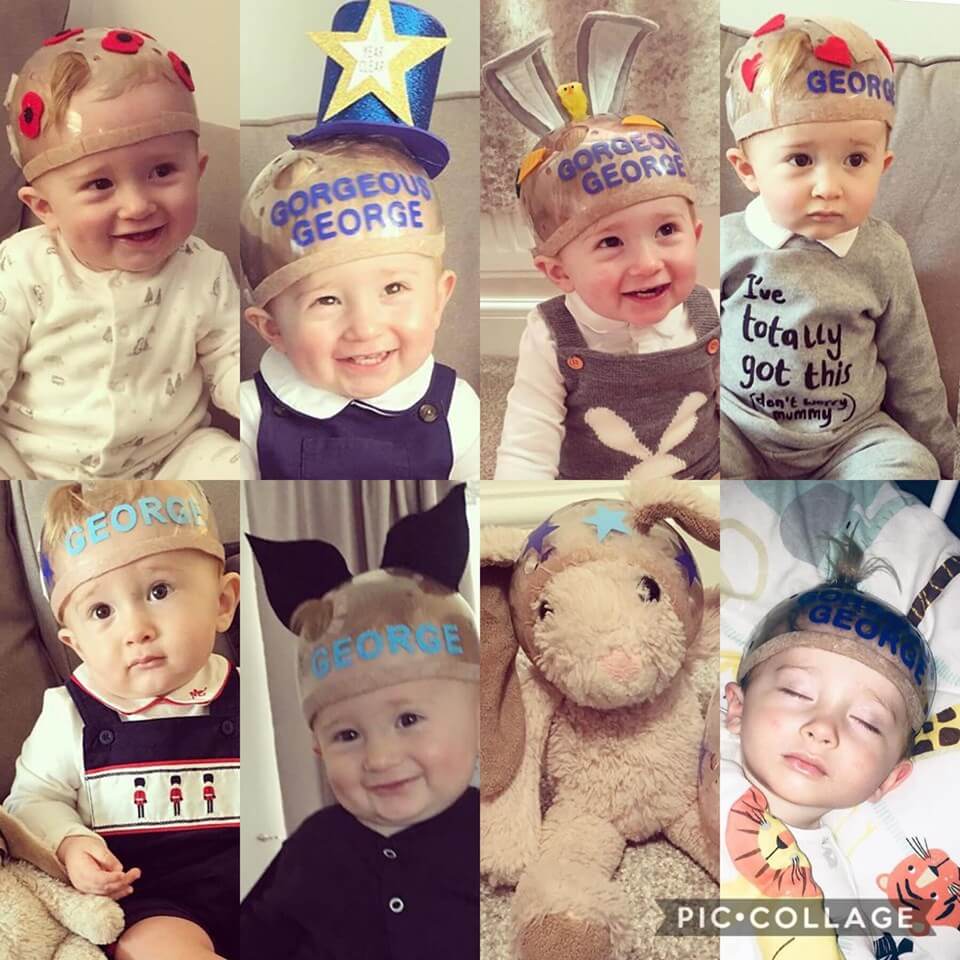 James and I were shocked to discover that brain tumours kill more children and adults under the age of 40, yet have historically received just 1% of the national spend on cancer research. When we heard about the charity Brain Tumour Research’s Wear A Hat Day campaign, we thought it was the perfect opportunity to help raise funds and awareness. My mother-in-law held a cake sale and we decorated George’s helmet with a top hat with a badge saying ‘one year clear’ to mark the first anniversary of his operation. We shared his image on social media and spoke about his brain tumour journey to help raise awareness. We were proud to raise more than £130. 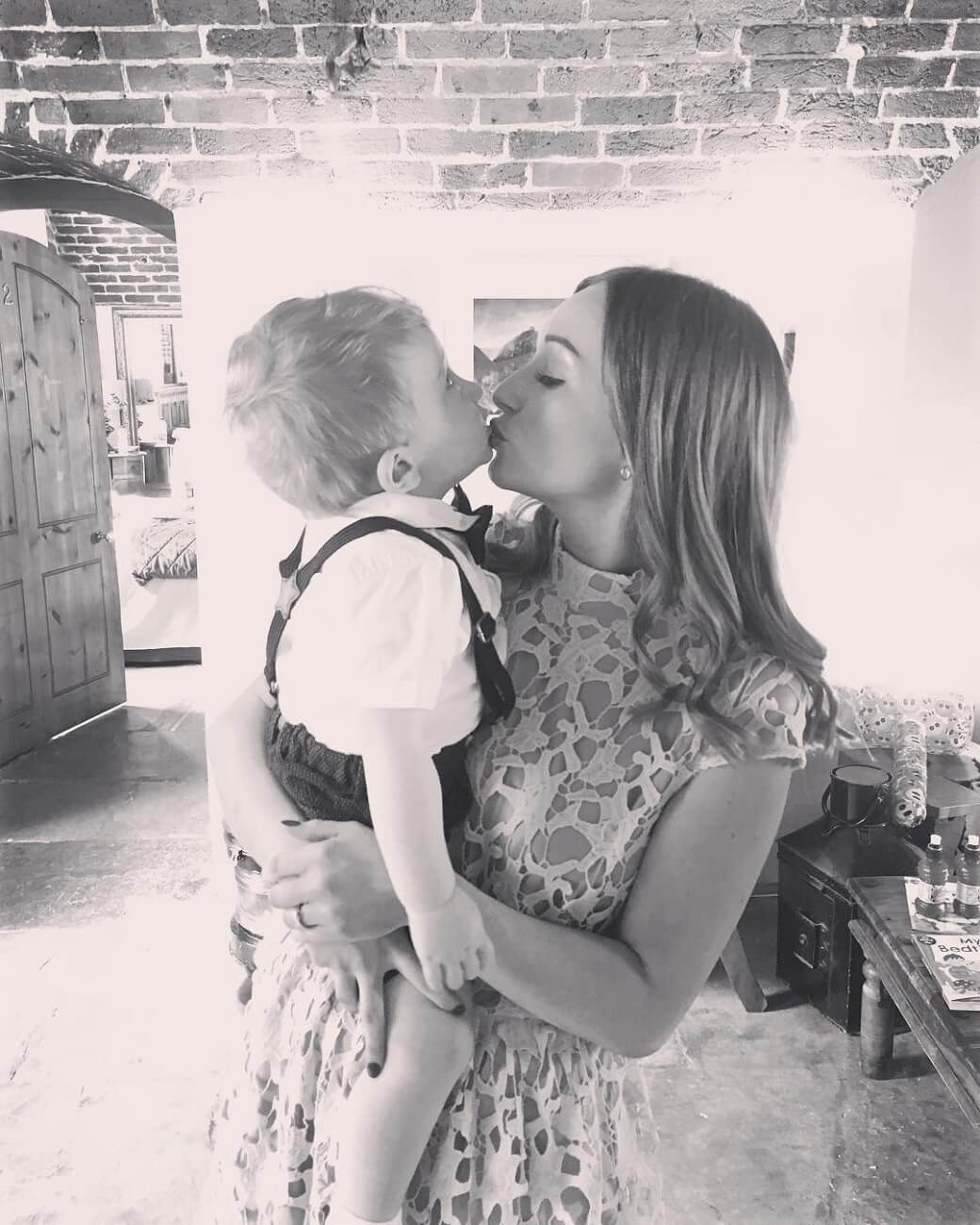 We’re adamant that even a brain tumour diagnosis isn’t going to rob us of happy memories with George. We’re glad to see the back of such a terrifying ordeal and have learnt to appreciate every moment with our baby boy.

We find it very difficult to re-tell our story and to share our personal pictures, but we also feel strongly that something good has to come of this and the best thing we can do is to raise awareness. If you are concerned about your child, follow your instincts. Life could have been very different for us if we hadn't done so. 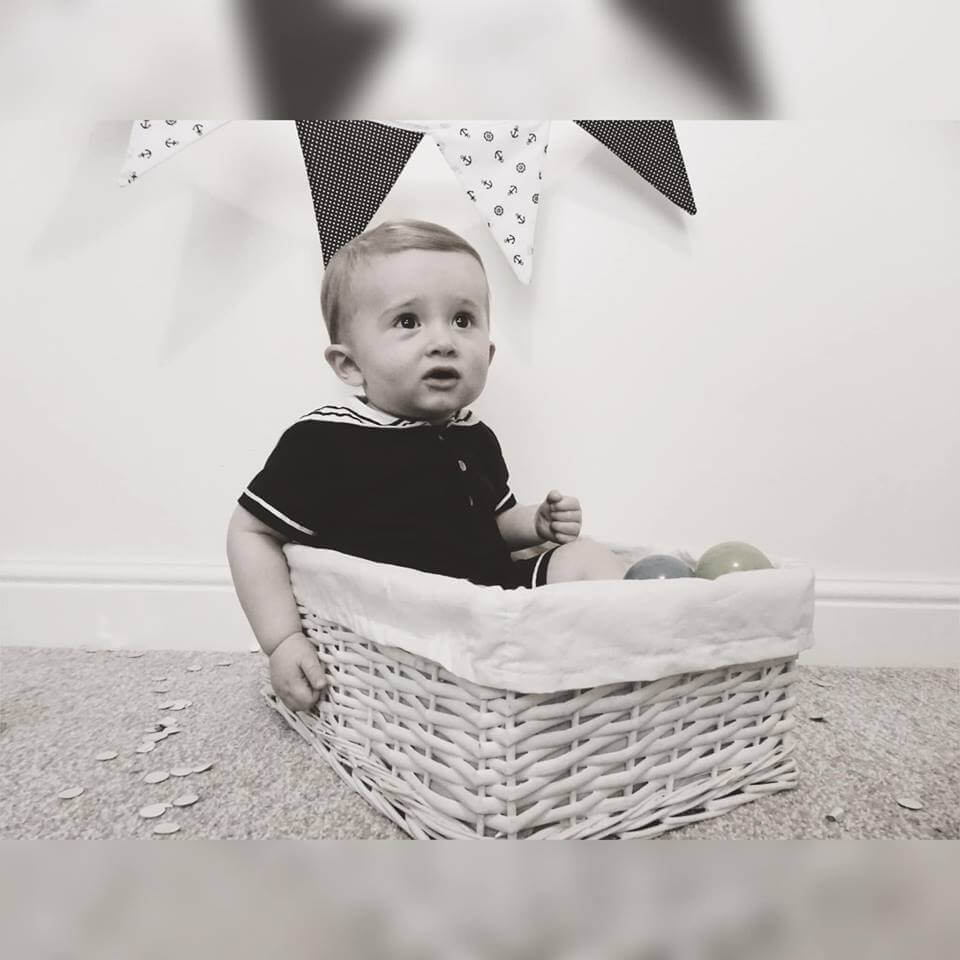 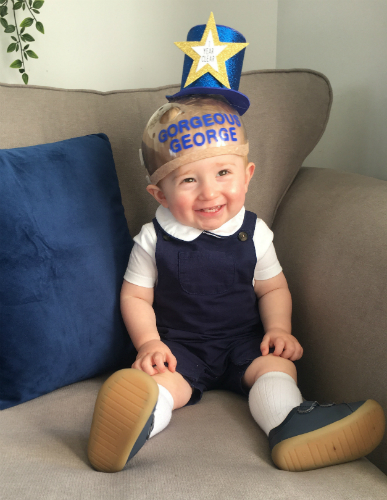