When toddler Arthur Ridout, from Dorset, started having dizzy spells, vomiting and headaches at the end of 2021, his parents Simon and Lauren never suspected a brain tumour would be the cause of his symptoms. After several visits to the doctor and a worrying episode which led to a trip to A&E, little Arthur was finally diagnosed with a medulloblastoma in February 2022 and was operated on almost immediately. The three-year-old has since had further surgery, radiotherapy and is about to start a nine-month course of chemotherapy to treat his aggressive tumour.

It all started in December last year. Up until then, Arthur had been a normal, healthy and happy little boy but around that time he was sent home from nursery a few times with sickness. The nursery staff also noticed that he was becoming unstable on his feet and wanted to take more naps, which wasn’t like him at all. At home we were worried too. He seemed to be having fairly regular dizzy spells and was complaining of headaches. My wife Lauren took him to our GP but Arthur wasn’t diagnosed with anything; Lauren was advised to keep an eye on him.

“Her mother’s instinct told her that something wasn’t right, so she persisted with the GP appointments and on their third visit in January, Arthur was referred to a paediatrician.”

That appointment was due to happen on 1 March. However, one Saturday in February, Lauren took Arthur and his older brother Fred, who’s five, to a park in Yeovil, Somerset, and soon realised that Arthur was really unwell. She went down a slide with him on her lap and when they got to the bottom, he was dizzy and wanted to lie down in the dirt. She called me and said she was taking him to A&E at Yeovil District Hospital. They saw a few different medics and one of them suggested that Arthur could have just been attention-seeking, which made us really cross. We were sent home and booked in for an optometrist appointment two days later, on Monday 7 February.

During that appointment, the optometrist asked us if Arthur was an in-patient at the hospital, which struck us as an odd question. She said he had swollen optic nerve at the back of his eye and we were asked to bring him back the following morning for a scan.

"That night, Lauren and I started googling everything, which is probably the worst thing you can do in that situation.”

Our online research told us that, in the worst-case scenario, Arthur might have a brain tumour. We tried not to overthink it. We had to keep it together for Arthur and Fred. The next day, Lauren took Arthur to Yeovil for his scan. I work long hours as a fourth-generation farmer on our family farm in East Chelborough, near Evershot, so I went to work but asked her to call me with news as soon as she could. We were expecting a CT scan, but it turned out to be an MRI, which he had to be sedated for. When the results came through shortly afterwards, Lauren phoned to say they wouldn’t tell her what it was until I was there. I was driving a big tractor at the time. I did a U-turn, went back to the farm as quickly as I could and got a vehicle. I was grateful to be surrounded by colleagues and friends, who comforted me and helped to calm down. I was scared and upset, not knowing what we were about to face after my 25-minute drive from home to the hospital.

When I got there, Arthur was in his own room and two nurses were with him. Lauren and I were taken to a meeting room, where five or six people were waiting to talk to us. We were shown the scan images and told that Arthur had a brain tumour, about the size of a plum. It would be another five weeks until we received the full diagnosis, during which time Arthur had to endure five lumbar punctures to confirm no spread of cancer cells to his spine.

It was a huge shock and I struggle to remember what they told us next, as it’s all such a blur. I know we did a lot of crying. It wasn’t long until we were put into an ambulance with Arthur and were raced up the M5 to Bristol Royal Hospital for Children. When we got there, we met a surgeon, who explained that Arthur’s tumour was causing hydrocephalus, a build-up of fluid resulting in pressure on the brain. He said they would operate the following day. Shortly after that, however, we met another surgeon, Mr Mike Carter, who was such a lovely bloke. He said he was keen to do the operation as soon as possible and that with our permission, he would go ahead the same day. We were relieved that things were moving quickly but it meant we had no time to mentally prepare.

“Before we knew it, Arthur was being prepared to go into theatre and just an hour or so later, he was taken away from us for the surgery.”

The emergency operation went well. It turned out that the tumour was blocking the third ventricle, making his cranial pressure dangerously high.

With precious little time to recovery from his first brain surgery, just two days later on 10 February, Arthur was operated on again, when he had 13 hours of surgery to remove the tumour. Again, the surgery was successful. Afterwards, Mr Carter came to see us and said everything had gone well and that he’d managed to remove all of the mass. 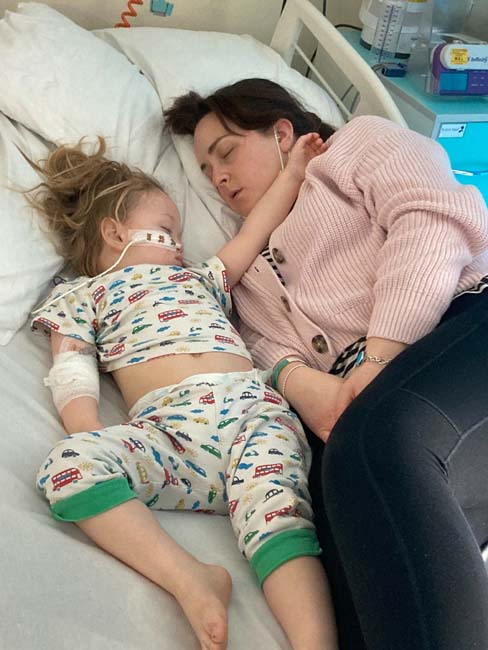 Things were not completely straightforward, however. Arthur went on to develop posterior fossa syndrome (PFS), also known as cerebellar mutism, which is a common occurrence with the removal of medulloblastoma in children. He has since had to go through rehabilitation, learning slowly to eat, talk, move and walk again.

“He can now move around with the aid of a walker and has starting to string together five to six-word sentences. We’re so proud of him.” 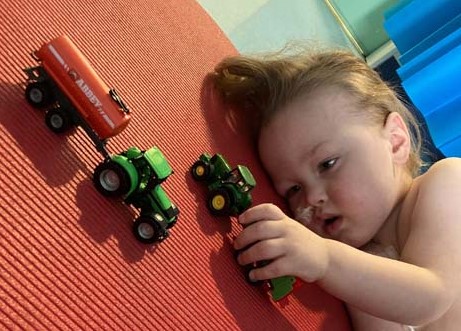 The biopsy results following Arthur’s surgery confirmed that his tumour was a medulloblastoma, the most common malignant or high-grade paediatric brain tumour. On 2 May, Arthur finished a six-week course of head and spine radiotherapy, which he received as an in-patient. He had 30 fractions in total and coped really well, with just a few little bouts of sickness. His hair has fallen out and he has some redness on his skin but overall, the side effects haven’t been as bad as we were warned they might be. At just three years old, he’s now had more than 40 general anaesthetics, which is just incredible. At the beginning, it was absolutely heart-breaking having to hand him over to the doctors and nurses to be put to sleep for his treatment but somehow, we got used to it and staying in hospital for weeks on end became our new normal and it got easier for Lauren and me. We were also able to be given weekend leave, which meant we could all go back to the farm at weekends, giving us some respite from the intense hospital environment. 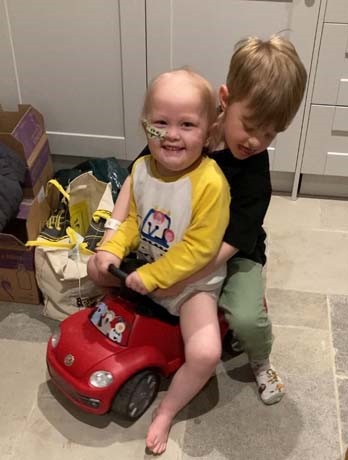 Arthur’s radiotherapy will be followed up by eight rounds of chemotherapy over nine months which we’ve been told that this doesn't come without its numerous short and long-term side effects, especially on a three-year-old's body and brain. We pray every day that Arthur will make positive steps in his recovery.

Inspired by Arthur and in a bid to do something to turn a negative into a positive, this month I’m taking on the Jog 26.2 Miles in May Challenge for Brain Tumour Research to help them get closer to finding a cure for brain tumours. Having come across the charity on Facebook, I was shocked to discover that brain tumours are the biggest cancer killer of children and adults under 40, yet historically, just 1% of the national spend on cancer research has historically been allocated to this devastating disease. The fundraiser is definitely a challenge for me; although I’m physically strong, I’m not a runner at all! I thought people would find it amusing to see a 6ft, 18 stone, unfit farmer running around the fields and footpaths of rural Dorset. I haven’t done any running since school and even then, I was quite lazy.

“Aside from the comedy element of my running challenge, there is a very serious message about the severe lack of funding for brain tumour research, which I’m hoping to get out there.” 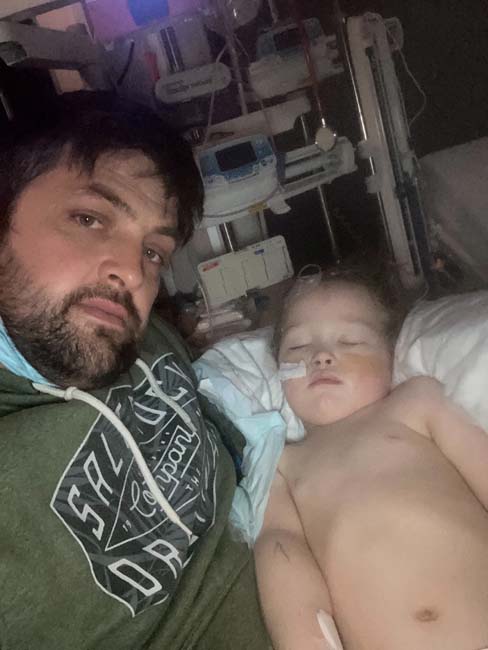 More awareness needs to be raised and I’m keen to do whatever I can to help. It’s been a life-changing few months for my family. Even having to relocate from the farm to Bristol city centre has been weird. I’ve never lived in a town or city before now. Seeing Arthur go through this has brought on feelings and emotions I never thought I’d feel. It's turned my life turned upside down but also given me a new perspective on life. Before his diagnosis, I spent a lot of my life working and probably not enough time with my wife and children. I’m re-assessing everything now and family life will definitely be prioritised. 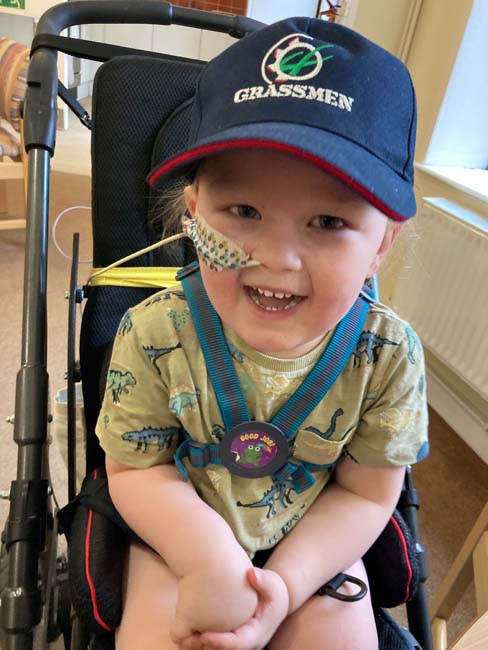