Families affected by GBM visit Centre searching for a cure 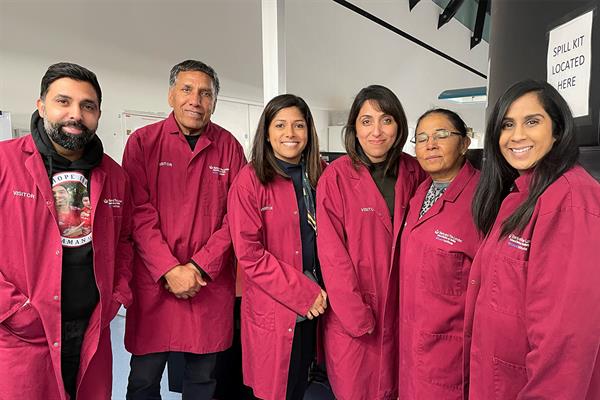 It was especially poignant as all attendees have been affected by glioblastoma (GBM) – the most common and deadliest type of adult brain tumour, and the type the team at Queen Mary, led by Professor Silvia Marino, is leading the way in research to find a cure.

They were able to meet some of the scientists working tirelessly to find a cure and go behind-the-scenes in the lab where pioneering breakthroughs – including a recent discovery which could help inform tailored treatment choices for GBM patients – are being made.

There was also the opportunity to pause and remember lost loved ones , and to honour those affected by this devastating disease.

Aman Sumal was just 36 when he died from a GBM a year ago, in December 2021. His sister Sonia Sandhu, along with Aman’s wife Jasdip Sumal, mother and father Gian and Raj Sumal, sister Jagdip Sandhu and identical twin brother Anoop, placed a tile on the Wall of Hope, representing the day of research they have sponsored in Aman’s memory. 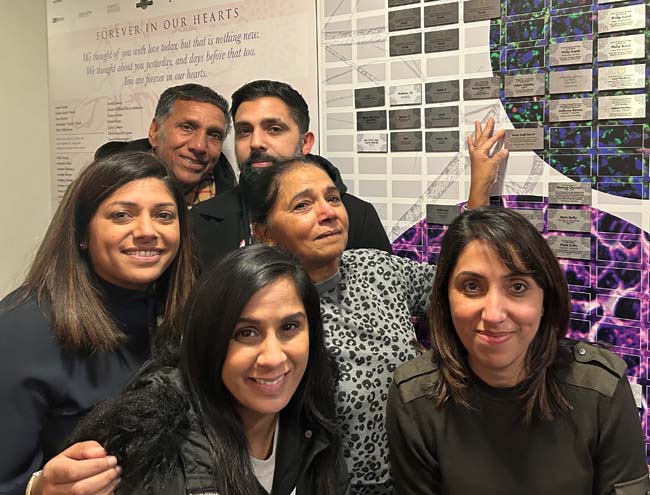 Sonia said: “Whilst placing a tile on the Wall of Hope in Aman’s memory was emotional, hearing about everything that’s being done to find a cure for this horrid disease was heartening and we left feeling hopeful for future patients. A cure must be found. Young people can’t keep dying needlessly from brain tumours.” 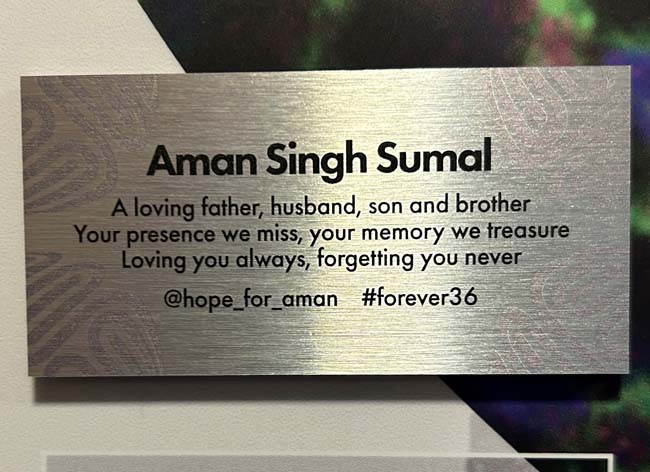 The tile for Aman

For many supporters, meeting the scientists was an extremely moving moment. Darryl Claypole said: “It was emotional, but it was wonderful to actually see the people who are working on finding a cure. They will never understand how important they are to us. Their work affects so many people and they are making a huge difference.

Darryl and his wife Sylvia have raised nearly £14,000 for Brain Tumour Research after their son, Tom, was diagnosed with a GBM in September 2021. Thankfully the family has received the “best possible news” after Tom’s most recent MRI scan in September was stable with no signs of growth. 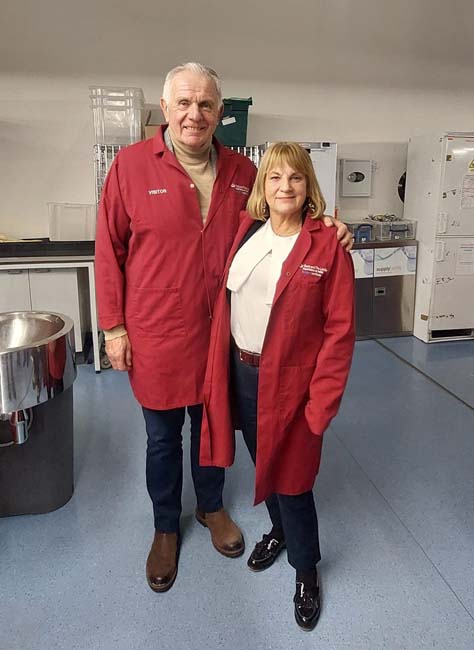 Darryl and Sylvia touring the lab

Citing Tom as their “hero”, Darryl and Sylvia have pledged to pledged to raise more than £100,000 in three years for Brain Tumour Research. Darryl added: “It’s shocking that the Government barely gives anything towards researching brain tumours. That’s why I want to raise as much as I can so a cure can be found.” 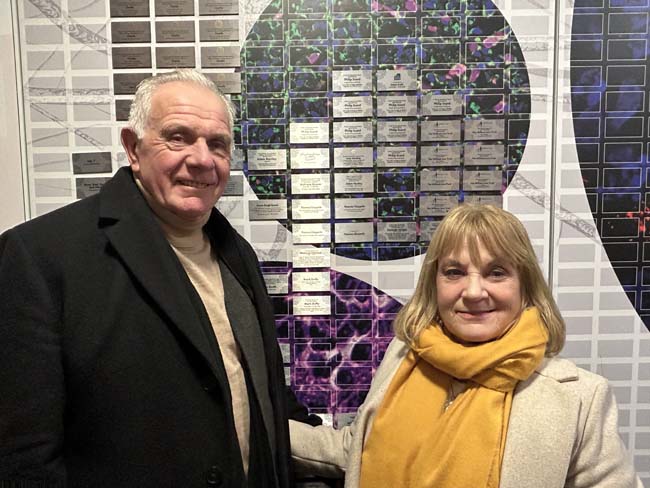 Placing their tiles for Tom

Clive Smith died from a GBM in July 2009, aged 55. His daughters Louise and Amy placed a tile in memory of their beloved dad for whom “family meant everything”.

Amy said: “Before Dad was diagnosed, we’d never heard of anyone dying from a brain tumour. It was such a shock to lose him so quickly. Much more funding needs to go into research because treatments for brain tumour patients have barely changed for decades. We are doing our best to raise awareness and funds to make a difference.” 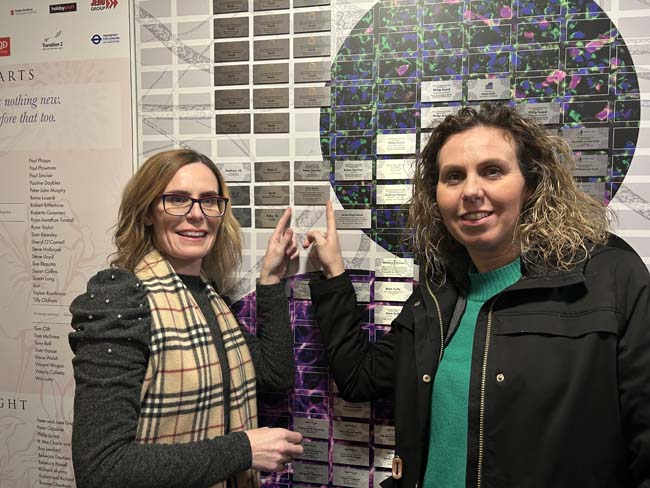 Louise and Amy at the Wall of Hope

“I felt very privileged to meet the scientists who are doing tremendous work to find a cure. Mum would be so proud to know I’m trying to make a difference,” said Tania Faverzani, who joined the charity as a Community Fundraiser in October 2021.

Tania lost her mum Judi Morgan to a GBM in January 2008, just a year after she was diagnosed. 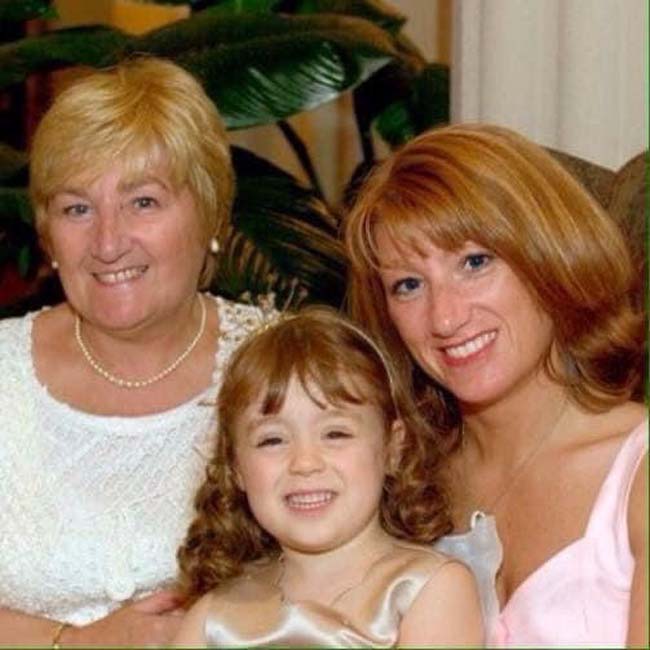 She added: “What I had witnessed with Mum’s brain tumour was horrific and barbaric. It was so sad and it’s awful to see many other people going through it. The same thing happens over and over, which is just wrong.

“I feel privileged to be working for Brain Tumour Research and I know Mum would be so proud.” 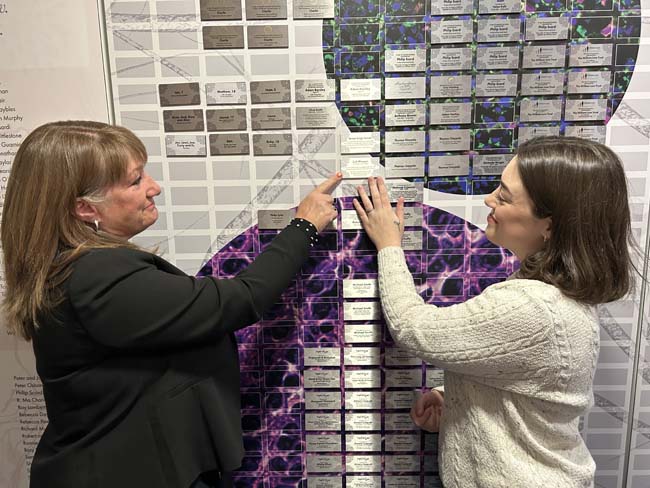 Tania and Talia placing their tile

We look forward to welcoming more of you at future lab tours next year.

To find out more about sponsoring a day of research, visit www.braintumourresearch.org/sponsor-a-day