We are grateful to Aman, and his brother Anoop, who worked with us in October 2021 to share his story here. Sadly, he passed away in December 2021. We remember Aman as we continue our work to raise awareness of this devastating disease and to fund research to help find a cure. He will be forever in our hearts.

Young father Aman Sumal had everything to look forward to when he was diagnosed with a brain tumour after suffering a seizure and headaches in August 2020. Initially, it was thought he had a low-grade tumour and he was given anti-seizure medication and referred for three-monthly scans. However, after having another seizure five months later, an MRI showed areas of concern and he underwent debulking surgery, with COVID-19 restrictions preventing anyone from being by his side. A biopsy of his tumour revealed that it was, in fact, a grade 4 glioblastoma multiforme (GBM) and the 36-year-old, of Ruislip in West London, underwent chemotherapy and intensive radiotherapy while his family privately funded a protocol with a naturopath from Australia. Sadly, Aman has continued to deteriorate and, having now exhausted all his options on the NHS, his family have turned to crowdfunding to raise the money needed to pay for private immunotherapy treatment and specifically-formulated vaccines.

Aman is intelligent, fun-loving and caring and watching him fight for his life is so painful. I sit by his bedside at Charing Cross Hospital, in London, utterly heartbroken, unable to contemplate life without him and just hoping for a treatment that works. His tumour has already taken such a toll and I just want him to be able to have more quality time with those who love him most, including our parents and two sisters, who are all devastated, his loving wife of six years, Jasdip, and their beautiful 22-month-old son, Rajan, with whom he’s besotted.

“As identical twins, Aman and I have always shared a special bond so watching him endure this horrible disease is the hardest thing I’ve ever done.” 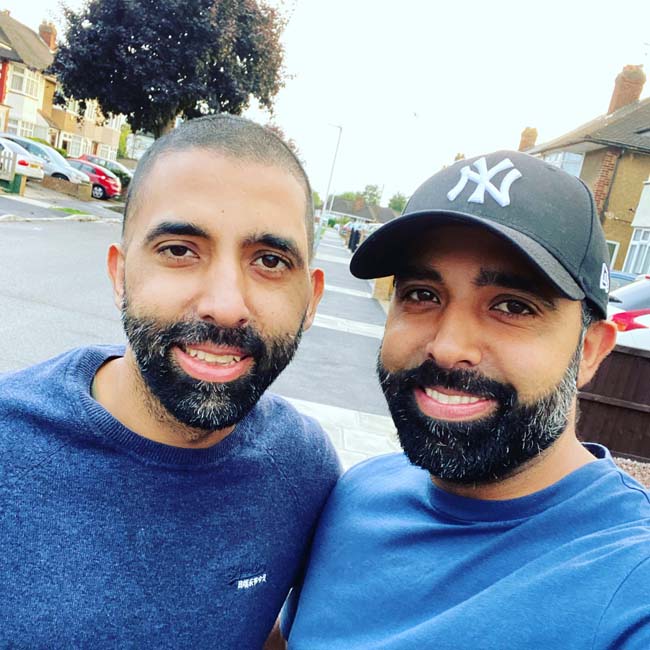 Everything started in August 2020 when Aman collapsed shortly after finishing work. He is a civil engineer and was about to drive home from a large construction project he’d been working on when a colleague stopped him, saying he didn’t seem fit to drive. Instead, Aman called our mum to ask if she could collect him as he wasn’t feeling well and, when they were only a few minutes from his home, he had a sudden seizure in the car. Mum slammed on the brakes, making an emergency stop in the middle of the street, and called out to strangers for help. They called an ambulance whilst she ran to Aman’s house to tell Jas what was happening. Due to COVID-19 restrictions, no one was able to accompany him in the ambulance and Mum and Jas were left watching it drive off with flashing blue lights, wondering what was going on.

“No one could have predicted then the journey we were about to embark on.” 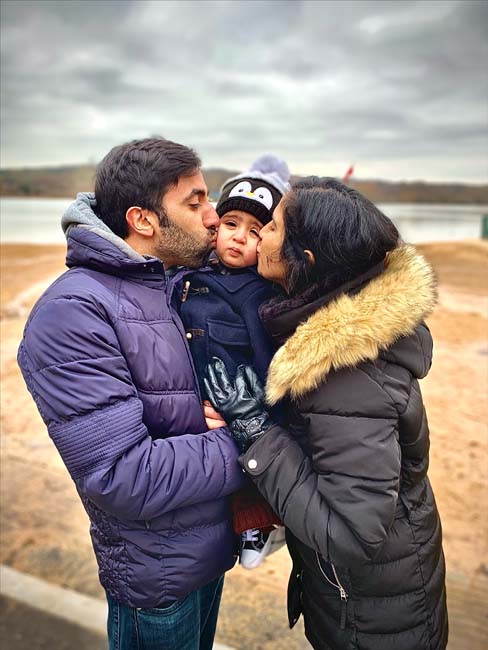 After his initial seizure, Aman began suffering from headaches and he had a feeling that something just wasn’t right.An MRI scan was carried out which revealed he had a brain tumour that was deeply embedded across three parts of his brain. On initial review the consultants believed it to be a low-grade tumour and placed him on anti-seizure medication and scans every three months to keep an eye on things.

“Sadly, they were wrong.”

In January 2021, Aman suffered another seizure and, after a second MRI showed areas of concern, he was scheduled for debulking surgery. That took place three days later and, because of the ongoing COVID restrictions, Aman had to go through it alone. Unfortunately, only 10% of the tumour could be removed safely, but a sample was sent for evaluation which is how we got the shocking diagnosis of a grade 4 glioblastoma multiforme (GBM), with an average survival rate of just 12 to 18 months. We couldn’t believe it. Aman was given four weeks to recover from the surgery before undertaking six weeks of chemotherapy and intensive radiotherapy, followed by more chemotherapy. 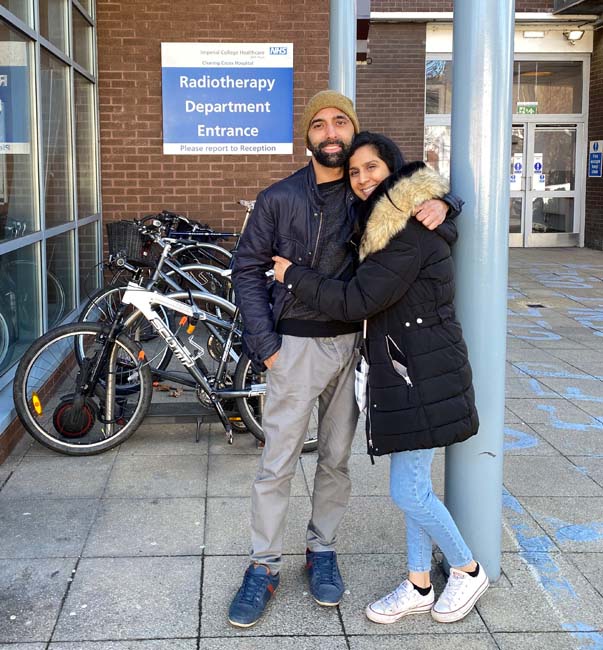 During that time, our family privately funded a protocol with a naturopath from Australia, which involved placing Aman on a ketogenic diet, eliminating all refined sugar and carbohydrates, and started a programme of natural supplements and repurposed drugs. We also sent a sample of his tumour to CeGaT, a gene analysis company in Germany, for DNA sequencing to try and determine if there were any mutations or traits within the tumour that could be targeted with medication or a personalised vaccine. 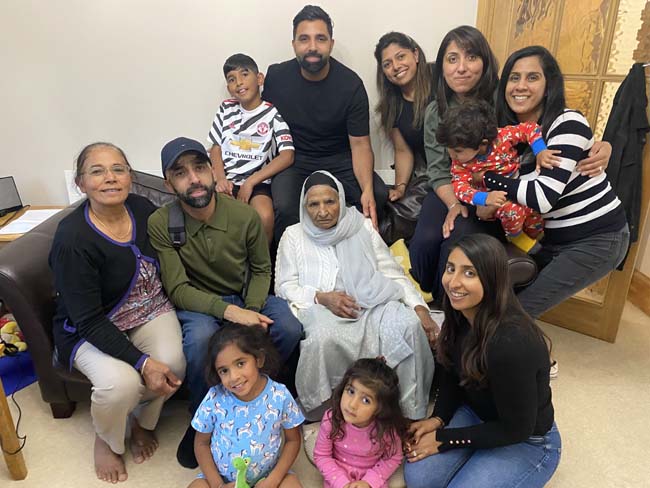 “In August, Aman became confused, weak and unstable on his feet and was taken to hospital.”

An MRI showed signs of disease progression and a build-up of fluid in his brain. He had to undergo another surgery to insert a permanent shunt to drain the blocked cerebral fluid into his stomach cavity. His treatment path was also changed as his oncologist believed the chemotherapy was no longer working. He was given two weeks to recover from the surgery before starting a different chemotherapy drug in September.

“This month, Aman’s condition has deteriorated even further.”

His short-term memory has been drastically affected, as well as his strength, hearing balance and sight to some extent. After two more visits to the hospital, he was eventually given an emergency MRI which showed further disease progression. It’s thought his latest chemotherapy drug isn’t working and his oncologist has recommended a combination of two experimental drugs, neither of which are funded through the NHS so will need to be privately funded, costing up to £10,000 a month. As we know that we are in a race against time, we also want to proceed with the peptide vaccines from CeGaT, which are specifically formulated for Aman and will be administered intravenously. 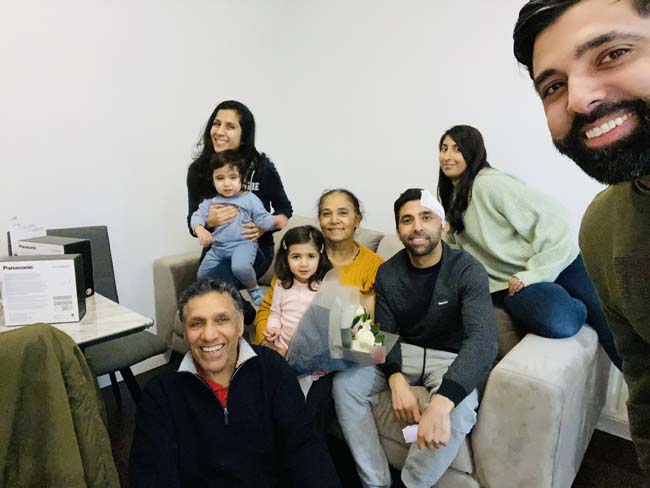 In order to raise the money needed, we launched a fundraising page on GoFundMe, which has received overwhelming support. We were half way to our total in less than 24 hours and in three days had topped £153,000. We’ve been so humbled by everyone’s generosity and had hoped to be able to start Aman on the new treatments straight away but, sadly, he’s been taken back into hospital and we will need to wait a bit longer for the doctors to give us the green light to move forward. We’ve also been researching alternative therapies and treatments that could benefit him. GBM is a very complex disease and every patient's tumour is different so there’s no single treatment that works for everyone.

“We’re all desperate for him to have access to everything that could help prolong his life and give him more time with his young family.” 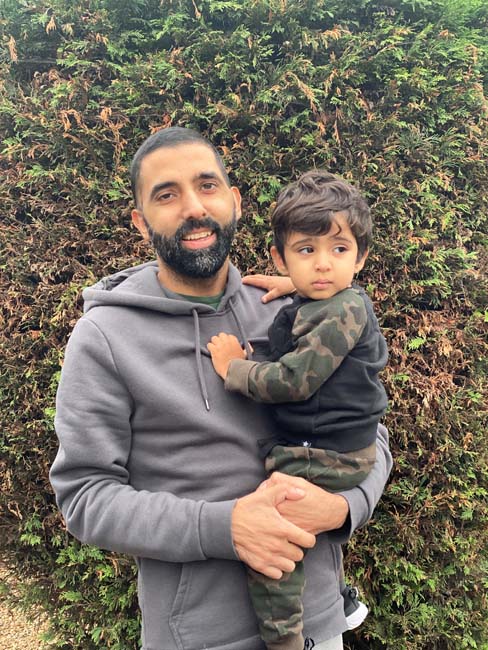