“Jenny didn’t give up so I can’t either” 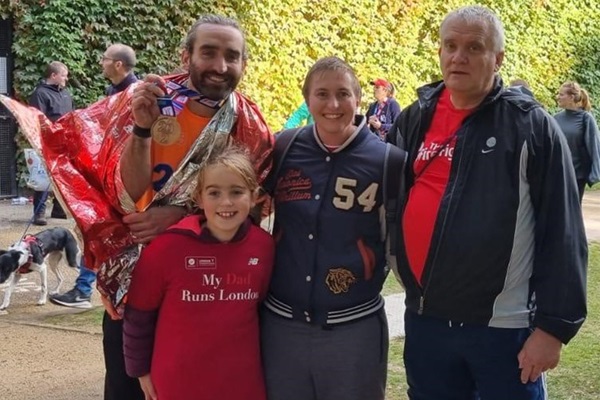 A man is honouring his step mum who died after being diagnosed with 14 brain tumours by running a marathon in her memory.

Jenny was 35 when she was diagnosed with a primary tumour in her lung and five secondary tumours in her brain, as well as others in her neck and pelvis in September 2020. She underwent a craniotomy to remove the largest of her brain tumours and used targeted drug therapy to try and slow the growth of her others, followed by radiotherapy in 2021.

Sadly, her health continued to deteriorate after it was revealed she had developed a further nine brain tumours and Jenny died in May 2022.

Following her shock diagnosis, Jenny launched a year-long series of fundraisers, raising more than £26,000 for Brain Tumour Research under the banner WellerFest. Paul said: “Running a marathon seems a small thing compared to everything she did in her last year. She didn’t give up so I know I can’t either.”

Having run the iconic event in 2021 wearing a 20kg breathing apparatus, Paul vowed he would never do it again. But after hearing him wondering what time he could finish the 26.2 miles without the additional weight, Jenny encouraged Paul to do it again.

Paul (pictured after the 2021 marathon with Jenny, dad Steve and daughter Ivy) added: “I’m not religious but knowing Jen’s somewhere cheering me on is going to help get me through it. Last time, she was there to cheer me on at two separate locations, London Bridge, which is about 12.5 miles in, and about one mile from the finish line. Running to those points will be emotional and, by the time the marathon comes along, we’ll be approaching the first anniversary of her death so it will feel quite raw.”

If you got a place in the 2023 London Marathon ballot and would like to run for Brain Tumour Research, contact Carol, our National Events Manager, via carol@braintumourresearch.org to find out how we can support you.