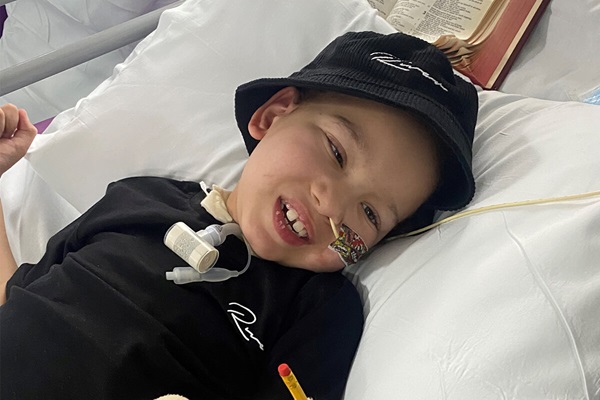 A heartbroken mother is working with Brain Tumour Research to raise awareness of the disease which killed her son.

Isaiah Jarrett was just eight years old when he died in July 2022, eight months after he was diagnosed with a medulloblastoma. His devastated mum Dena Allen is sharing his story in the hope that it will prevent other families from going through the “heartache and pain of losing a loved one”.

When Isaiah began suffering bouts of extreme vomiting in November 2021, his family was told his illness could be gastroenteritis. After five weeks of no improvement, he was given a CT scan which found a golf-ball-size mass on his brain.

Isaiah endured almost 15 hours of surgery which, due to the location of the tumour, caused him to lose his speech instantly. Sharing his story in The Mirror, mum Dena said: “After his first surgery on 20th December I never heard Isaiah’s voice again. He eventually learned to communicate through gestures and murmurs.

“Everything that could possibly go wrong went wrong. Isaiah suffered with swelling and a build-up of fluid which meant he had seven surgeries in total, all of which I was told could kill him. You’re faced with an impossible decision as a parent who wants the best for their child.”

After gruelling chemotherapy and radiotherapy an MRI scan showed the cancer spread to Isaiah’s brain stem and spine, and Dena was told no treatment could save her son. Isaiah died at home surrounded by his family on 20th July 2022.

Dena, who is taking part in our 10,000 Steps a Day in February Challenge, added: “My main aim this year is to fight to get brain tumours out there and spoken about. We need to fully understand them to be able to provide better treatments and eventually a cure to stop anyone else from suffering from this cruel disease.”