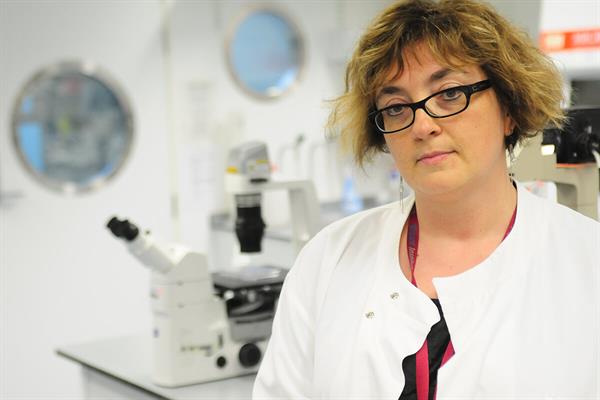 Scientists at the Brain Tumour Research Centre of Excellence at Queen Mary University of London have made a significant finding which could mean more effective treatment for children with a specific type of brain tumour.

Professor Silvia Marino (pictured), who leads the research team and worked on the study, said: “There are four groups of medulloblastoma, each of them composed of different subtypes but, at the moment, all patients are treated with the same plan of surgical resection followed by chemotherapy and radiotherapy. Our research has shown that there could be important benefits for one of the subtypes of group four, by treatment with a combination of pre-existing drugs.”

Our Director of Research, Policy and Innovation, Dr Karen Noble, said: “The results of this study are very promising. A kinder, and more effective treatment for patients with medulloblastoma is much needed. Personalised medicine, tailoring treatments to the individual’s tumour, is the way forward, and this research shows that this could be possible for one sub-group of this disease.”

Amongst those welcoming the news is the family of Rayhan Majid, who was just four when he died within months of a medulloblastoma diagnosis.

Rayhan's family marked the fourth anniversary of his death yesterday by launching a Fundraising Group called Remembering Rayhan to raise vital funds in his memory.

His mum Nadia said: “Rayhan endured four operations, one of which left him unable to speak or walk, and six weeks of radiotherapy. He was on his first round of chemotherapy when he died. We were helpless as we watched our boy change from being full of laughter and energy to being unable to communicate or move. The treatment was almost as cruel as the disease itself and this cannot be right so any improvement for patients diagnosed in the future is long overdue.”

The study is published by the journal Neuro-oncology and can be read online here.