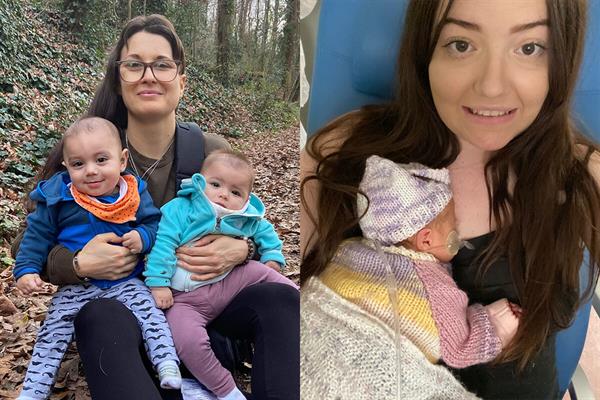 Two young mums have praised EastEnders for its sensitive portrayal of a harrowing brain tumour storyline.

Viewers of the BBC soap watched last week as Lola Pierce (played by Danielle Harold) underwent brain surgery, only to be told her tumour was incurable and the only treatment would be palliative.

The scenes struck a chord with Kylie Weatherby, 34, and Laura Mahon, 30, who have both been diagnosed with a glioblastoma (GBM) – the same type of tumour Lola has.

Big EastEnders fan Kylie was pregnant for the first time with twins when she received her devastating diagnosis. She said: “I watched as the doctor told Lola and Jay they’d found a brain tumour and that it could be cancerous, I was biting my lip. Then they started crying and I just let it out. When you’ve been through it yourself, watching someone else go through it is really emotional.”

Having undergone surgery, followed by radiotherapy and chemotherapy, Kylie is now monitored with three-monthly scans. Her most recent scan was on Friday and she is waiting for the results.

She added: “I actually messaged Danielle Harold on Instagram after to say thank you for playing this part and for helping to raise awareness. I think she’s doing amazing.”

Laura was also pregnant for the first time when she was diagnosed and says she is “delighted” with the high-profile storyline, although it has triggered many difficult emotions.

“It’s sad to watch what is happening to Lola because it’s so close to my story. It all came flooding back when Lola was told she had a brain tumour, how it was such a massive shock, and then the sitting in hospital and waiting for results,” she said. “Danielle Harold plays the role so well, it’s scarily accurate. I talk about the storyline with my husband, Danny, and my parents. My mum got upset while watching it, but it’s so important to raise awareness because people don’t understand how quickly brain tumours change people’s lives.”

Laura’s tumour is inoperable due to its location. She has just completed six months of chemotherapy and her most recent scan showed the tumour was stable. She and Danny are looking forward to celebrating daughter Sienna’s first birthday on 30th November.