Laura Mahon, 30, from St Helens, was 20 weeks pregnant with her daughter when she woke up and couldn’t move her toes. Over the following week, she was unable to feel much of her right leg. Her GP immediately sent her to The Walton Centre in Liverpool for an MRI scan, which revealed she had a terminal glioblastoma (GBM) brain tumour. Laura was faced with the difficult choice of having the baby early, at 30 weeks, or risk her own health. Baby Sienna was born on 30 November 2021. Sienna suffered a punctured lung and spent a week on an incubator. She is now doing well and is putting on weight. Unfortunately, new mum Laura was told she has just two years to live.

My husband, Danny, and I were so excited about the prospect of having our first child together.

One morning in September 2021, when I was 20 weeks pregnant, I woke up and realised that my toes on my right foot weren’t moving. I didn’t think too much about it, after all I was pregnant and was feeling tired. But things got worse the next day and I could no longer move my right leg and was struggling to walk. 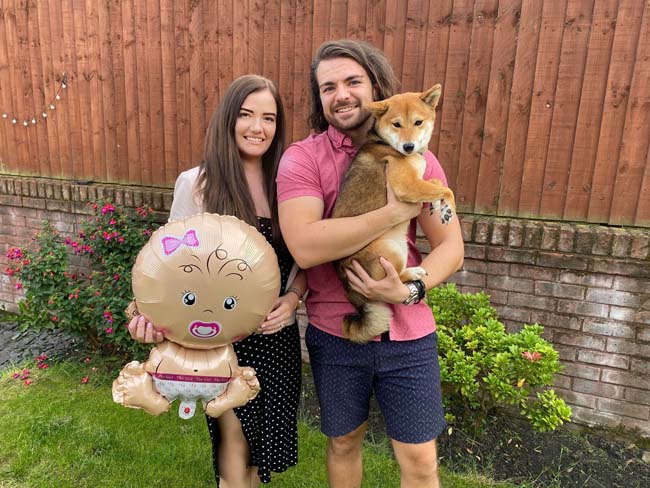 I was now 24 weeks pregnant, so I went to see my GP, who thought the baby was lying on a nerve and causing the problems. He sent me to The Walton Centre for an MRI scan of my back. It came back clear, but I was sent for another MRI scan on my brain to make sure everything was OK. 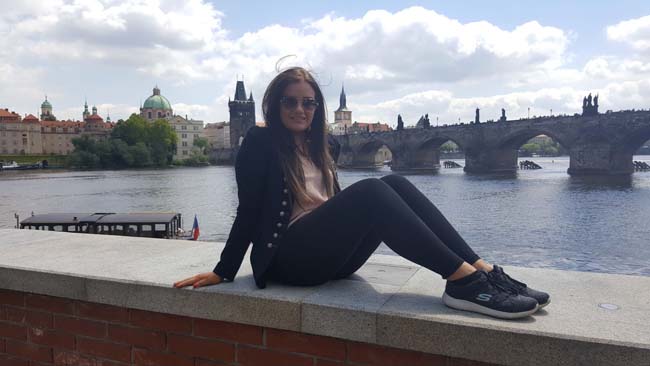 I was only in the machine for five minutes when they pulled me out. They said that they could see something, so they sent me back into the scanner. I lay there for an hour, and I could see into the radiology room as doctors appeared, all looking at my scan. I was pulled into a room with my mum and was told the devastating news that I had a brain tumour. They told me it had more than likely been there for years and years and had now started growing.

“It was such a shock, I was only 29 and didn’t think something like this could happen to me. I was so focused on the baby, but I was getting more poorly.”

Because I was pregnant, the treatment options were limited. The doctors told me that this was a very unique case, and they wanted to monitor me before deciding what to do. 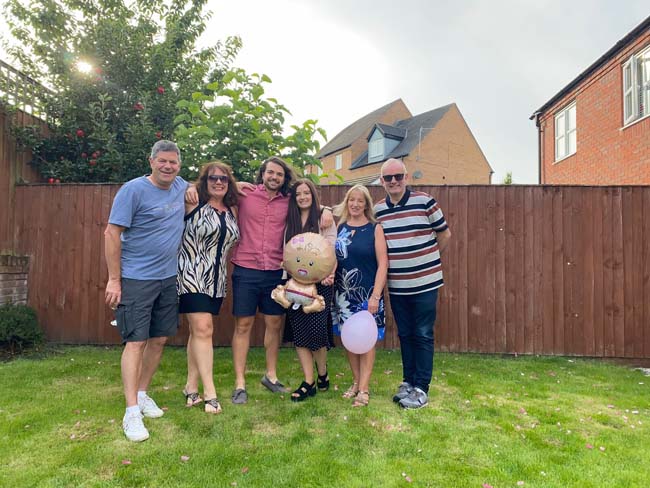 “When I was 27 weeks pregnant, I became really poorly and could hardly walk, and after many heart-breaking conversations, Danny and I made the toughest decision of our lives.”

I couldn’t walk properly, I was being sick, and I was so tired, so we decided to bring our daughter into the world at 30 weeks. At my planned caesarean section, the midwifery team put me under general anaesthetic so that I was totally relaxed. They didn’t want to put any pressure on my brain because of the risk of causing further complications.

On 30 November 2021, our beautiful daughter Sienna Grace Laura Mahon was born, weighing just 3.4lbs, at Warrington Hospital. Sienna was taken to the neonatal ward where she was placed in an incubator. She developed pneumothorax - a collapsed lung – so she was transferred to Royal Oldham Hospital because she needed a higher care unit. 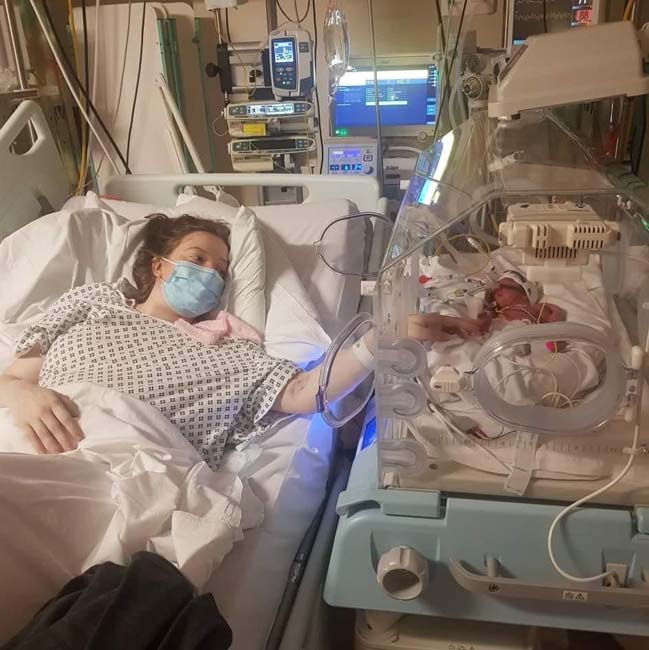 I discharged myself from Warrington Hospital, even though I wasn’t really well enough, because I wanted to be with Sienna. Danny and I followed her to Oldham, where she was put in an incubator for a week. We weren’t allowed any visitors because of COVID restrictions. We really wanted our family to be with us, so it was very stressful for both of us.

We were driving back and forth between Oldham and The Walton Centre in Liverpool for appointments. It was so tiring, but all the staff we encountered at each hospital were so amazing and supportive. I cannot thank them enough for looking after our baby and us. 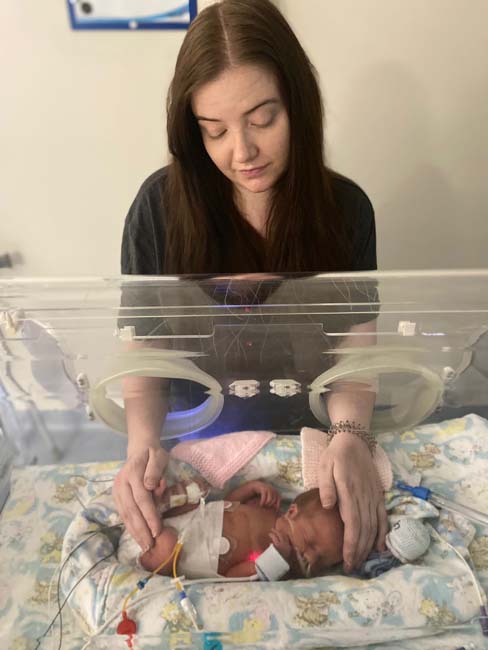 On 9 December, I had an MRI scan with contrast dye, and this revealed (or showed) that the tumour had nearly doubled in size. I was told that it was now inoperable because it was on my motor cortex, and it wouldn’t be safe to remove it. They could only do a biopsy, so the following day they did that, but they could only remove around 20%.

“I was devastated because I’d got my hopes up. It was yet another setback, bad news on top of bad news.”

I left hospital on 14 December and Danny and I moved into my mum and dad’s house. That was when everything caught up with me and I just broke down. Danny took time off from his job at United Utilities. 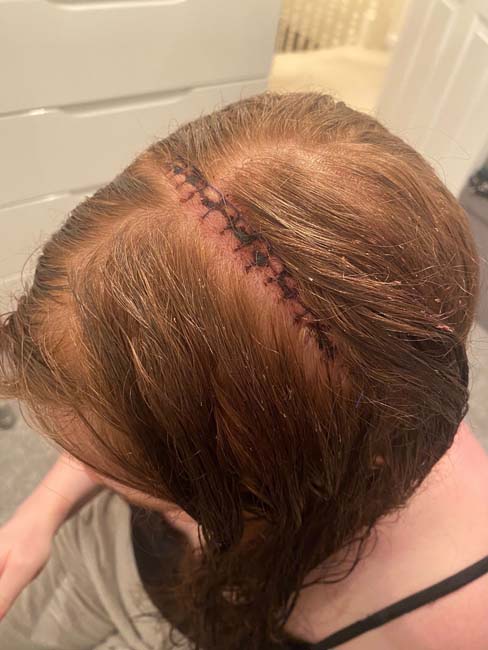 Sienna was still in Warrington Hospital. It was so hard because I was so tired and I was recovering from two major surgeries, and I could only walk with crutches. Danny would go to see her every morning, and then he would come home to pick me up so that I could visit her in the afternoon. It was great to see that Sienna was getting better and she was putting on weight.

On 22 December 2021, I received the results of my biopsy. Danny and I had prepared ourselves for the worst. We knew deep down what it was going to be but being told at 29 years old that you have inoperable stage 4 brain cancer – a glioblastoma (GBM) brain tumour – and that I had just two years to live is something you can never prepare yourself for. Hearing that said out loud was a moment we’ll never forget.

As you can imagine, Christmas was cancelled. We usually love that time of year, but we didn’t even put a tree up. Danny and I were just so shocked. We told both sets of parents, but I didn’t want other people to know as I didn’t want to be treated differently, and I didn’t want to upset people. 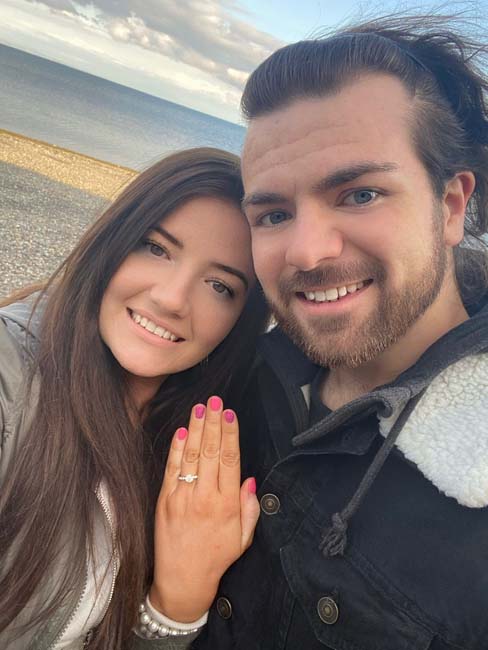 Because of my prognosis, there were certain things that I wanted to make sure I did before it was too late. Danny and I had got engaged in April 2021, so we decided to get married, and we planned a low-key ceremony with family and a few friends for 6 January 2022. But two days before, I had my first-ever seizure. Fortunately, after resting for a day, we were able to tie the knot as planned and we had a lovely day. 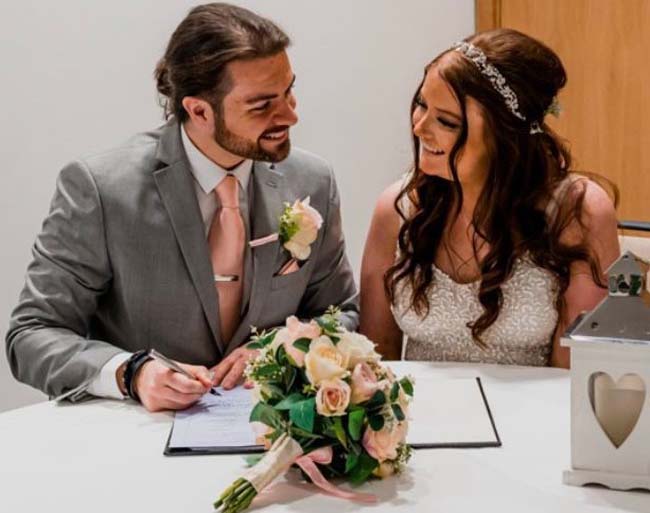 The next day, we registered Sienna’s birth, and on 8 January she had her christening in a chapel at Warrington Hospital. That was so lovely because the staff had organised a party with food and presents, which was so nice of them.

“It felt so surreal, like I was living two separate lives. Things all looked fine, like we were a happy family, then I remember how poorly I am. But it’s so special having Sienna with us, it’s like what we had originally envisaged.” 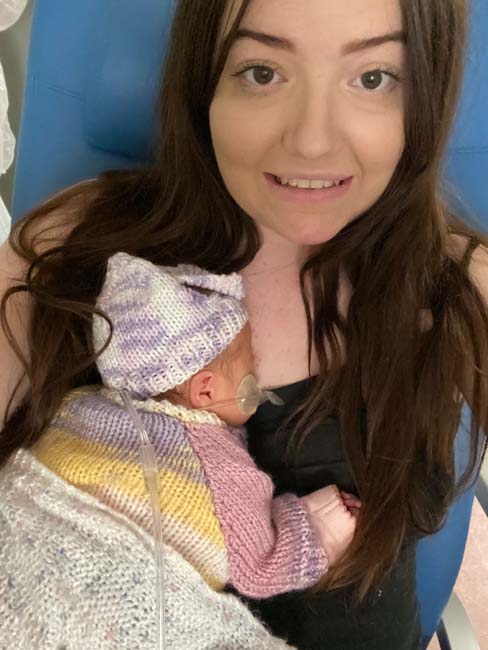 Unfortunately, another negative thing happened soon after. My liver function crashed, which meant that I had to stop my chemotherapy. My liver recovered after a month, so I was able to continue the chemotherapy.

At the start of April, I had an MRI scan which showed that the tumour had stabilised. It had even shrunk a bit. That was such a massive relief, and it was so nice to hear something positive. 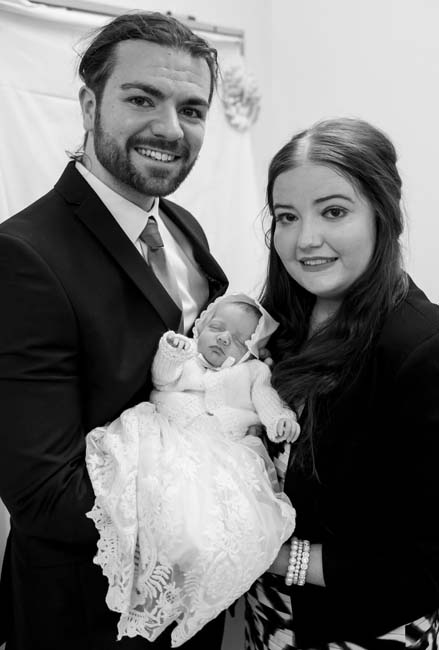 I’ve just completed six months of chemotherapy. During my fourth cycle, I fainted every time I stood up, it was horrible. At first the doctors thought it was a seizure but it was actually due to low blood pressure. During my fifth cycle, I felt so nauseous and I was unable to eat anything for four days but it was all worth it because my latest scan showed that the tumour was stable, and it has even shrunk a bit more so I feel really relieved.

My next scan is due in the first week of January 2023, so it feels really nice to now have some time off from hospital appointments.

“It means we will be celebrating Christmas this year and I’m really looking forward to enjoying the festivities with my family.”

Danny and I are also looking forward to celebrating Sienna’s first birthday on 30 November. That will be so lovely. Sienna’s lung repaired itself and she is completely fine, happy and healthy now. She has just started nursery which she’s loving. It’s so nice to see her developing, and she’s now trying to walk.

We’ve been on loads of mini-holidays and we love going out and doing nice things to make memories together, but I need to take each day as it comes. It’s hard at times and I just break down and cry.

“I see others with GBMs who manage to live longer, so I am clinging to the idea that I might be one of those people. I’m fighting as hard as I can and I’m staying strong for my family.”

I want to help raise awareness of this devastating disease, and my family and friends are planning to do some fundraising events for Brain Tumour Research. 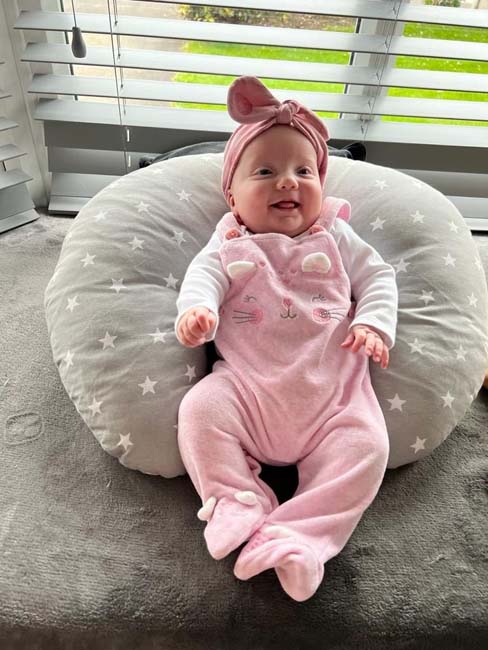 The lack of government funding for brain tumours is shocking. Everyone has a brain so more needs to be done. 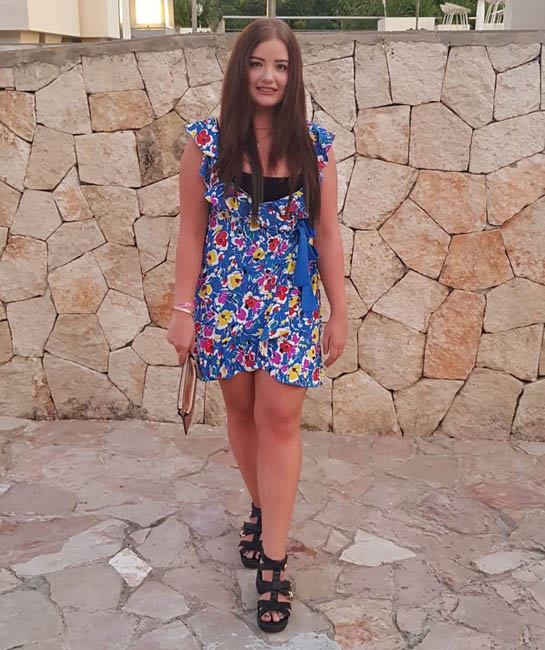