“Hats Fit For A Queen” for Brain Tumour Research 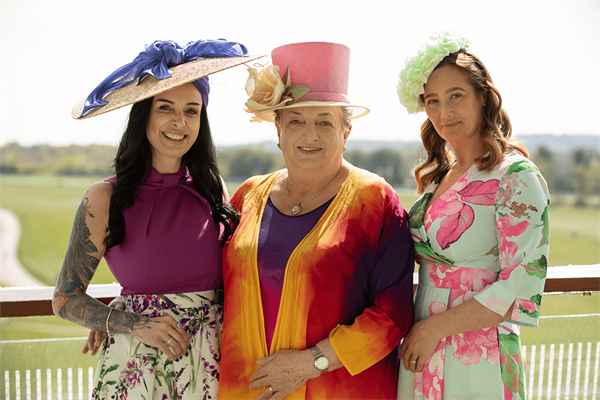 A one-off collection of hats inspired by the seven decades of The Queen’s reign is to be auctioned in aid of Brain Tumour Research.

Members of the brain tumour community were invited to model some of the 15 hats, which have been specially created by top milliners, in association with the British Hat Guild, Epsom Downs Racecourse and Go Epsom.

The collection, which is entitled “Hats Fit For A Queen” and includes pieces by Royal milliners Stephen Jones OBE and Rachel Trevor-Morgan, is being auctioned online until midnight on Sunday 12th June.

The hats will be displayed in the Queen’s Stand at Epsom Downs Racecourse for both days of The Cazoo Derby on Friday 3rd and Saturday 4th June.

Brain tumour patient Lisa Connell (pictured left) was one of those given the ‘royal treatment’. She was joined in the photoshoot by her best friend Sally Godman (pictured right) and fellow brain tumour community member Anne McEntee (pictured centre), who sadly lost her husband Tom to a glioblastoma multiforme (GBM) in November 2015.

Lisa modelled a hat named ‘Nashwan’, after the 1989 Derby winner, and said she was “absolutely delighted” to be part of “such an exciting day”. Her friend Sally, wore ‘Petal Power’ by Alexandra Harper, which was designed to be reminiscent of the petal hats and bathing caps popular in the 1960s.

Anne modelled a hat named ‘Lucia’, created by Judy Bentinck Millinery and representing the 2000s. She described her involvement as a “real privilege” and said: “I wanted to get involved in this project because it’s all in the name of raising funds for Brain Tumour Research. Since losing Tom, fundraising has been key to ensuring his legacy lives on.”

Find out more about the Queen’s Jubilee Hat Auction for Brain Tumour Research and see the beautiful hats here: www.braintumourresearch.org/fundraise/jubilee-hat-auction