Tom McEntee, a banker who lived in Epsom, died just two years after his diagnosis with a glioblastoma multiforme (GBM) – a highly aggressive type of tumour – in November 2015, despite enduring several operations, chemotherapy and radiotherapy. He was 67 and left his wife Anne, their three children Niamh, Owen and Colette, and five grandchildren.

Here is Tom’s story, as told by his wife, Anne…

The hardest part about losing Tom is the silence. I miss his infectious laugh which filled our house with happiness. When something happens in my life, good or bad, the one person I want to tell isn’t there.

“Tom was full of life and enjoyed sports, cooking, reading and travelling. He adored our children and grandchildren and loved nothing more than to spend time with them: telling them stories, with his melodious Irish accent.”

Tom, the second youngest of six siblings, grew up in County Donegal before moving to Dublin to work in finance. We met while I was studying at University College Dublin, when I was 21, and we knew from the outset we were meant to be together.

I had a wonderful marriage with Tom, with a lot of laughter and a lot of love. Our three children were born in Birmingham, before we moved to Bedfordshire and then finally to Epsom in 1986, a place we loved to call home.

“Tom had a strong faith and was a member of the The Catenian Association, a group of catholic businessmen. He received great support from our parish priest and from our local church, St Joseph’s in Epsom. I think this helped him through the dark times of his diagnosis.”

It was in November 2013 that Tom began to show symptoms that caused us concern, although for months he’d complained about struggling with his left peripheral vision while playing golf. Tom and I were due to take a trip to Ireland for my sister’s birthday but, just days beforehand, he experienced a tingling sensation in his arms and feet. I wanted to cancel the trip but he insisted we went. When we were in Ireland, Tom had a couple of episodes where he’d go missing for a few minutes and when we found him, he’d have no recollection of what happened.

Tom and I went to the GP the morning after returning from Ireland, and, fearing Tom had had a transient ischaemic attack (TIA), the doctor immediately referred us to the stroke unit at Epsom Hospital.

“Tom had an MRI scan which revealed the devastating news that he was living with a glioblastoma multiforme (GBM) – a highly aggressive type of tumour. We were both in shock but naive to how destructive the disease would be.”

I remember walking back home from the hospital with Tom, hand in hand, shell-shocked by the news. We phoned our children and they were terribly upset; Colette flew back from her home in Australia to be with us.

A few days after his diagnosis, Tom had debulking surgery at the St George’s Hospital in Tooting. It was there we were told that Tom’s tumour was more aggressive than initially thought and there was no cure. My rational mind knew that Tom was dying but there was always a part of me that never gave up hope.

Tom was remarkable and just four days after surgery, we travelled to the John Radcliffe Hospital in Oxford to welcome the arrival of our granddaughter Celia, born to Niamh and her husband Neil. He was determined to be there, a testament to how much he loved his family. 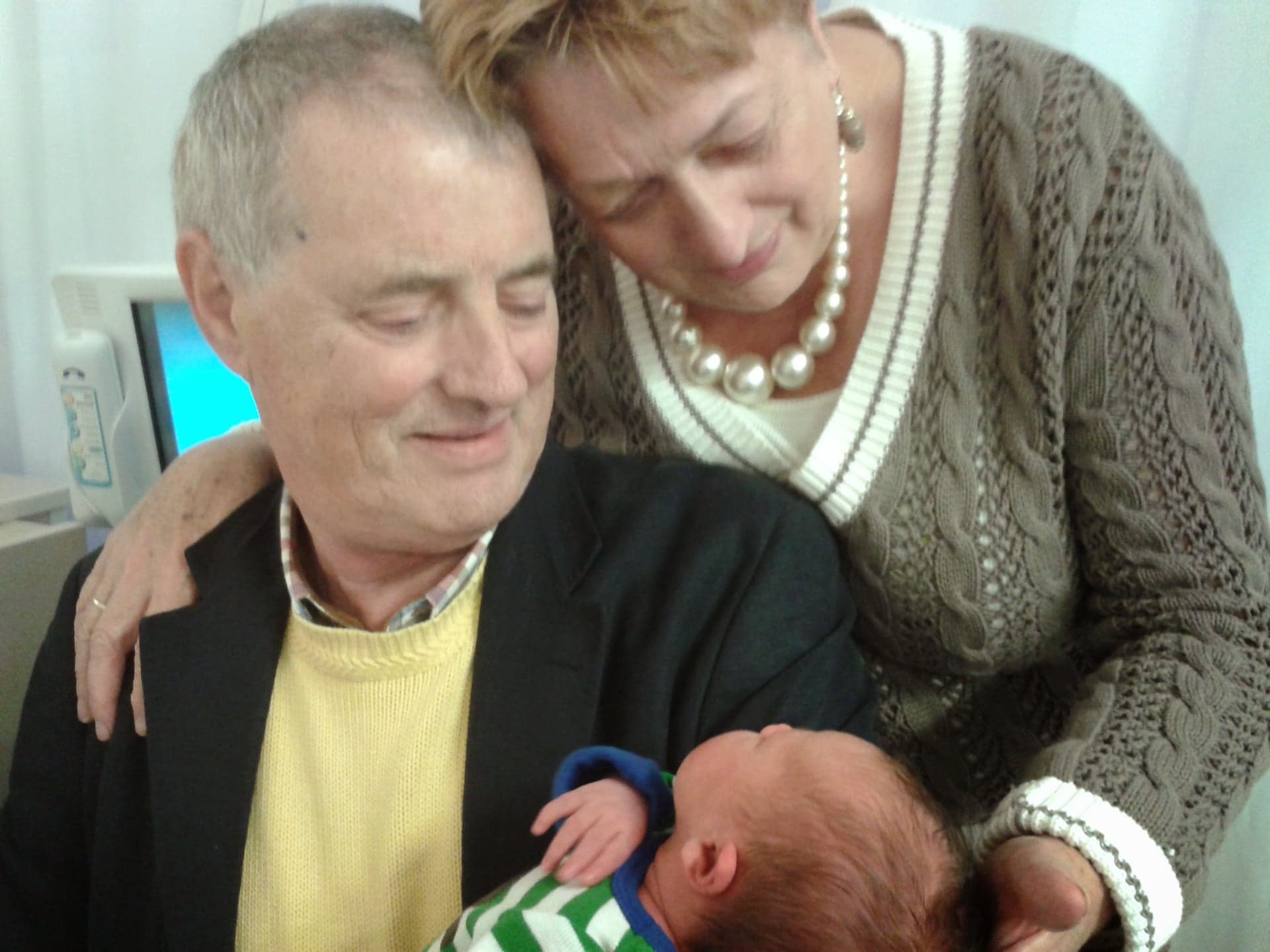 After recovering from the operation, Tom was left with a huge horse-shoe scar which he joked would bring good luck to those who touched it. He faced his illness with an admirable sense of humour and I think that helped him stay positive. He then had several months of chemotherapy and radiotherapy at the Royal Marsden Hospital and numerous operations at St George’s Hospital to help drain the fluid that had built up on his brain.

I would not wish a brain tumour diagnosis on my worst enemy. Over several months, Tom declined gradually and became dreadfully poorly: his balance had gone; he couldn’t see and his memory was impaired. Despite everything, he was determined to do the things he loved and listening to music helped him rally on.

Even while Tom was ill, we enjoyed a cruise around Norway and a trip to Sardinia. He also achieved his ambition of visiting Colette and her husband Craig in their new home in Australia in April 2015. Travelling gave him purpose and determination and provided lasting memories I will never forget.

One of the more visual aspects of Tom’s illness was the weight-gain from his steroid medication. He was a proud man and was always well-dressed, so it was hard to see the drastic change in his physical appearance. I tried to buy new clothes as often as possible to keep him looking dapper.

In August 2015, Tom and I took our final trip to County Wexford in Ireland to visit family and to mark our 45th wedding anniversary. We stayed in a lovely cottage with my cousin Annie, Owen and his wife Ronela and their son Ciaran, and had a special time, but I knew it would be Tom’s last holiday. When we returned home, an MRI scan confirmed my fears.

“We were told that Tom’s treatment would be palliative; that was the only time I saw Tom cry about his illness, because he knew he wouldn’t see his grandchildren grow up.”

Tom received excellent care at home by carers from the NHS and the local hospice, who were incredible. They remarked how good-natured Tom was and they shared a lot of laughter with him even in those final few weeks. Tom passed away on 7 November 2015, with me and our children by his bedside, shortly after receiving his last rites.

“When Tom was diagnosed with a brain tumour, we had no idea of what we were facing or the devastation that lay ahead of us. His diagnosis with a GBM was a dreadful blow to our family and his bleak prognosis was totally life-altering. Our local GP, who had been Tom’s doctor for more than 26 years, was a fantastic support.”

Fundraising has been a moving way to ensure Tom’s legacy lives on. With the assistance of my loyal friends and family members, we have raised more than £16,000 for the Brain Tumour Research charity, through a series of events, such as bingo nights, music evenings and car boot sales. On Wear A Hat Day this year, I cut off most of my hair and dyed it pink to help raise awareness. 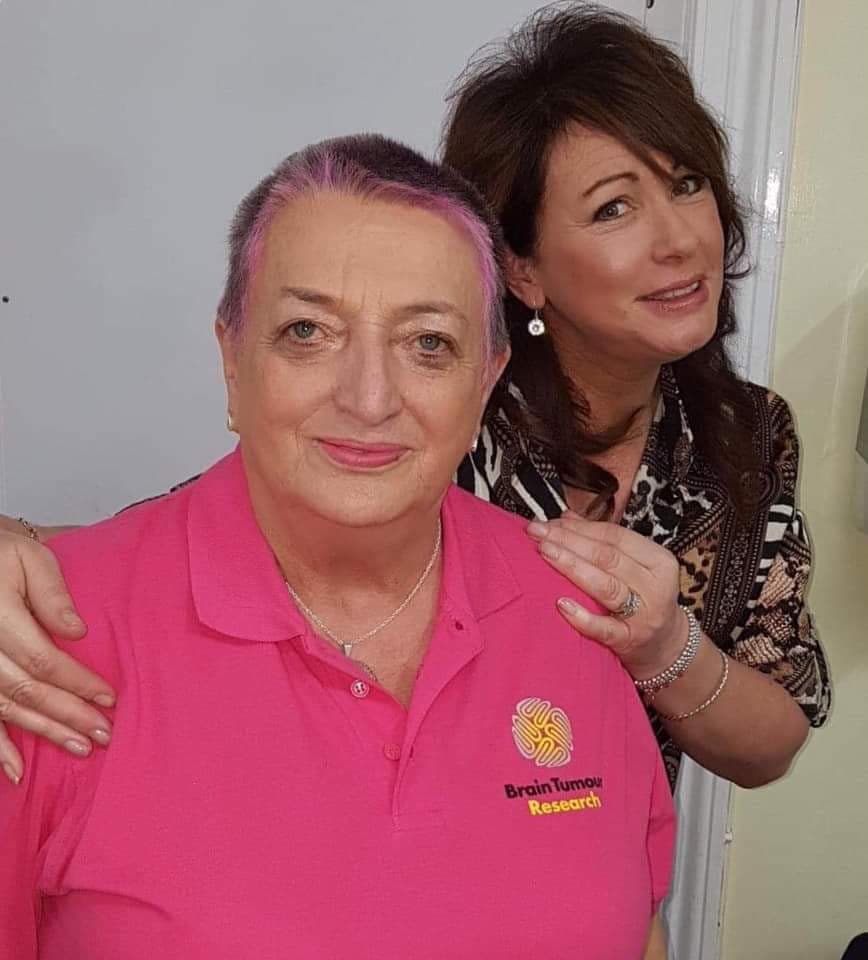 The latest fundraising challenge included me, Niamh, Colette, Owen, Tom’s godson Karl, and friends who have been affected by brain tumours abseiling Portsmouth’s iconic Spinnaker Tower. It was one of the hardest challenges as none of us are particularly keen on heights. However, we were determined to do all we can to raise awareness of this horrendous disease. We are very grateful to everyone who sponsored us. 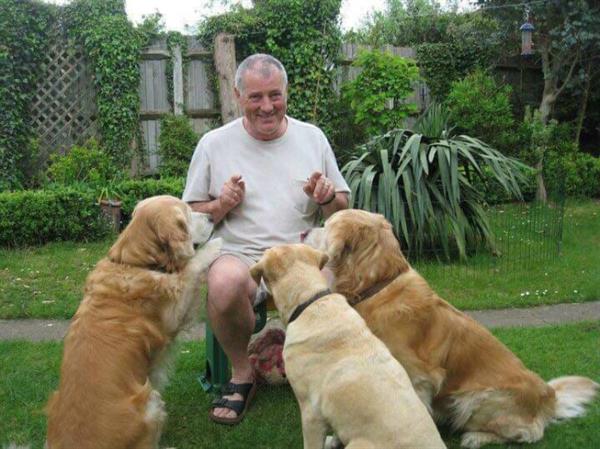