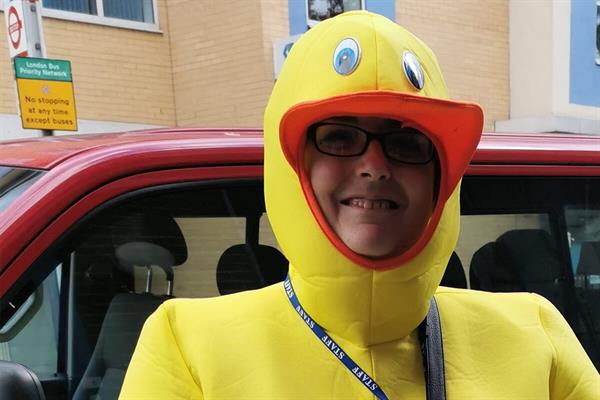 As we enter the third week of our 10,000 Steps a Day in February Challenge, dozens of Brain Tumour Research supporters have been sharing their stories in the media as they step out to help find a cure.

Amongst the stories have been a teenager and step-mum both diagnosed with brain tumours, a woman inspired by a teen more than 3,000 miles away and a patient whose take on the challenge is truly quackers.

Daisy Cranshaw took the challenge global after her story was shared in the New York Post. Daisy’s step-mum Tina was diagnosed with a glioblastoma multiforme (GBM) in September 2020 and the family faced a second blow after Daisy was herself diagnosed with a brain tumour last December. Thankfully, Daisy has been told that her tumour is not life-threatening and in support of her step-mum, she is taking part in the challenge and has raised more than £900.

Next stop: Bermuda as a woman stepping forward in support of a friend’s daughter shared her story in the Royal Gazette. Lisa Straw was inspired to take on the challenge after teenager Emilia underwent surgery to remove a brain tumour in November. Lisa’s group, Walking for Warriors, has already raised more than £2,000.

Back to the UK and Kelly-Marie Casey (pictured), also known as Derek the Duck, had ITV London reporter Sally Williams in stitches when she taught her the warm-up routine she uses to prepare for her daily steps. Kelly was diagnosed with a GBM in 2015 and, in November, after a routine scan revealed it had grown, she completed a year-long course of chemotherapy. Kelly spoke of her determination to spread positivity because “dying doesn’t have to be dim”.