TV gardener Danny Clarke had already lost two siblings and a parent in quick succession when his beloved sister Margot became ill. The family witnessed her decline over two years following her glioblastoma multiforme diagnosis before she died aged 52, leaving a husband and young daughter.

“Every now and again we might get a glimpse of the old Margot but, mostly, it was like talking to a child. It struck me that seeing my dad and other siblings die had been very different. Brain tumours steal the person long before their body finally gives up.”

Here is Margot’s story, as told by her brother Danny Clarke…

Dad was in the army so me and my five siblings were born all across Europe until we settled in Kent in the seventies. Growing up, we were a close family. Four of the six children were girls and there’s definitely a line of strong women, passionate and opinionated! The males of the family tended to be a bit more easy-going. Dad would hide when all the girls were around!

My younger sister Margot was pretty laid back. Everyone loved her and I was particularly close to her. She was always smiling, from childhood onwards, and was known for being a wonderful listener and generally keeping the peace. Sometimes it was like she was the glue of the family, keeping it all together.

It’s still a family of girls really. I have a daughter, two granddaughters and lots of nieces but no nephews. Margot also had a girl, Georgia, who is 16 now and a credit to her parents. The family suffered a big blow in 2006 when our brother Roy died suddenly after a heart attack. He was a theatrical agent and Margot took on the business for a few years, until emigrating to Canada in 2008 with her husband Mark and Georgia.

Just a year after Roy died we lost Dad to stomach cancer, then two years later, in 2010, we also lost my sister Sandra to breast cancer. No one really expected Margot to be the next to become ill, that same year. She always looked fabulous and looked after herself, going to the gym, eating carefully and not smoking. She hadn’t been in Canada for very long when we noticed she was looking different. It was her first trip back to the UK and I remember her looking so, so skinny. Margot hadn’t needed to lose any weight, in fact she had no weight to lose, so it was noticeable.

Margot was staying at Mum’s, complaining about headaches and getting very forgetful. She nearly flooded the bathroom after leaving the taps running while preparing a bath. Then came the call from my sister Jenny, saying that Margot had collapsed and been taken from the local hospital in Dartford to the Royal London in Whitechapel. Doctors suspected a brain tumour and Margot was rushed in for emergency surgery.

It had all happened so quickly. I felt shocked and numb, incredibly worried, especially after recently losing so many other family members to cancer. We all had our fingers crossed, hoping that Margot would pull through and be okay. Mark was trying to be as positive as he could.

After the surgery, part of the old Margot had just gone. She smiled less, joked less, and seemed less able to follow conversations. Of course, brain surgery is brutal and it affects “good brain” as well as the tumour; Margot now seemed muted and slower. It was like she was on mood stabilisers with some of her personality faded away. Despite this, we were all so relieved that she was still with us.

Margot had been diagnosed with a glioblastoma multiforme (GBM), an aggressive form of brain tumour, so following her operation in London she returned to her home in Canada to begin further treatment. She accepted all the treatment available, including chemotherapy and radiotherapy. It seemed to be working and we were told she was stable, but warned that if the tumour returned, it would be inoperable.

Margot stayed in Canada with Mark and Georgia and the family kept in touch with her recovery over Skype. One year later, a scan discovered that the tumour was back. This time, Margot had run out of options regarding conventional treatments. Mark was desperately searching for experimental treatments but nothing worked.

We lost Margot within two years of her diagnosis. It was obvious when her time was coming, she was really going downhill, but at least that meant the family could visit her in Canada and say our goodbyes. She was still in her own home, with Mark doing an incredible job caring for her. I went over with my daughter Ashley and her baby Freya.

It was so sad. Margot was staring into space, not knowing what time of day it was, not even looking like herself anymore as she was very bloated from the steroids. I burst into tears seeing her like that. Every now and again we might get a glimpse of the old Margot but, mostly, it was like talking to a child. It struck me that seeing my dad and other siblings die had been very different. Brain tumours steal the person long before their body finally gives up.

We were told that she only had weeks left, but Margot hung on like that for a few more months. She always had a stubborn streak! It felt like she spent a long time between life and death. Seeing that slow, drawn-out and inevitable decline has made me re-evaluate what I would want. There was never a chance that she might recover and there was no dignity in her deterioration. When we finally got the call to say she had died in hospital, there was definitely some relief that she was out of pain, although our hearts were all breaking for Mark and Georgia, who was only ten.

There’s no way that losing three out of six siblings, and a parent, over a few short years can fail to affect you. You have to surround yourself with the people you love and do what you love. I had always loved gardening, moving across from a sales career to retain and eventually set up my own horticulture business. My business had been trudging along for 20 years when I started to think about rebranding and sorting out my website a few years ago.

I knew I needed a more memorable and distinctive company name, rather than just my own, so I came up with “The Black Gardener”! My marketing course leader nearly fell off his chair when I told him and said it’s brilliant. You don’t see many black people working the land, there’s very few black farmers, tree surgeons and the like, and I liked the honesty and humour of it. Not everyone likes it, some people are shocked, but if it works for me then what’s the problem?

Mostly I get a great response, drivers give me the thumbs up when they spot the logo on my van and it’s certainly a conversation-starter. Pretty soon afterwards, I got a call from a production company wanting me to do a screen test for a new gardening programme on BBC. I thought it was a wind-up, but it checked out, and three days later I was hosting a film crew in my garden.

My feet haven’t really touched the ground since. The programme was picked up and ran as “The Instant Gardener” for a couple of series, with more exciting projects in the pipeline. Everyone has good and bad luck, I really believe that, and now it feels like Margot and my other loved ones are looking out for me. In turn, I want to do what I can to help the charity Brain Tumour Research so patients like Margot aren’t left with zero treatment options and their families aren’t forced to watch them suffer like she did. 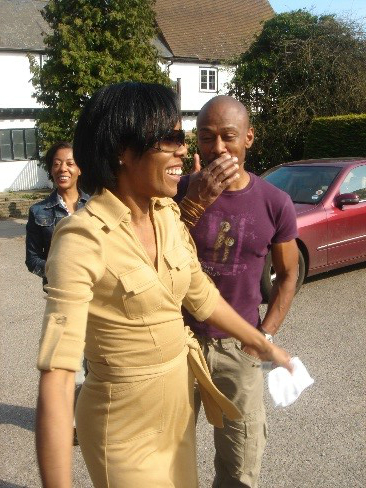