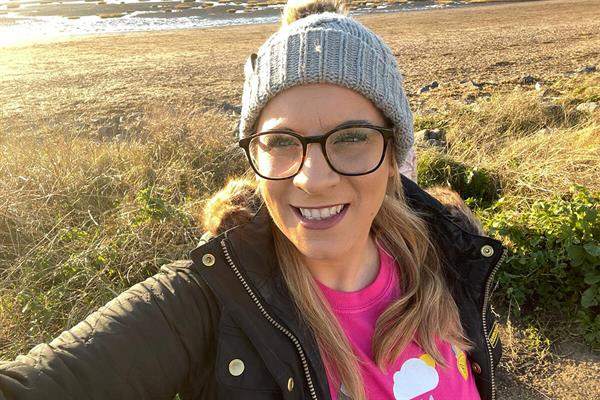 With just over two weeks to go until supporters step out for our 10,000 Steps a Day in February Challenge, we’re sharing the stories of just a few of the inspiring people who are taking part.

Following gruelling surgery to remove an acoustic neuroma, Jessica Jones (pictured) was left unable to walk. Incredibly, the mother-of-three says she is ready to “fully embrace” the challenge.

She added: “I’m taking part in this challenge because without the years of medical research undertaken my outcome and life could have been so different. I will be eternally grateful to the neuro team and to all those who have undertaken research into brain tumours whose dedicated work has allowed me to carry on with my life.”

Evie Kean was just nine when she died from a diffuse intrinsic pontine glioma (DIPG) in January 2014. Her mum Emma Whitfield is stepping up to the challenge in Evie’s memory. Emma explained: “What Evie had was incurable, but through research it will one day be curable. We won’t get anywhere without research so it’s crucial that I take part in this challenge.”

Cindy Whife and her partner Malcolm Domb completed the challenge last year and raised more than £2,000. They are taking part once again because Cindy is living with two brain tumours after having had another removed.

Cindy said: “Brain tumours are much more common than people realise. I’ve had them, I know others who have had them and the wards were full when I was in hospital, the men’s and the women’s, as I’m sure they usually are – that’s a lot of people all suffering from them at the same time.”

There’s not long left to join the 10,000 Steps a Day in February Challenge. Sign up today by clicking here and following the three steps to get started.