Cindy, a 60-year-old grandmother thought that she was going through the menopause when she began to struggle with her balance in 2013. After numerous trips to the doctor, Cindy found out she had been living with a low-grade meningioma, that had been growing steadily over the last five years.

“When the doctors came in to speak to me I thought: “If this is the menopause then I must have it really bad”. But when they said “brain tumour” I was relieved. Everything made sense.”

I have always tried to take care of myself and my family’s health and it was the beginning of 2013 when I started to not quite feel myself. I was 54 and working as a receptionist in a local dentist at the time when I felt I had no energy, suffered double vision and kept losing my balance. I put it down to my age and that it was likely the menopause, so had several visits to the doctors to work out what was wrong, I even took a Well Woman test to make sure. When everything came back clear, I thought “oh well - maybe I’m just being silly”.

I’m a mum of two and my partner Malcolm (Malc) of 18 years has three children from a previous relationship. A few months later I had gone to pick up Malc from work and clipped the wing mirror of a stationary car. This was very unlike me, I seemed to be bumping into things a lot and at work was having to put kitchen towel on a tray to carry tea as I kept swaying and spilling it.  I didn’t tell anyone about what was going on. I felt silly and thought about how lots of women deal with the menopause, so why should I be different.

The symptoms continued for another month and worsened when Malc and I went on holiday to Tenerife in November 2013. I felt awful, and spent most of the holiday sleeping, suffering numbness down my face and around my mouth, tiredness and my balance was getting worse. This was an annual trip that we loved to go on, so I felt really bad leaving Malc on his own. It felt like a really bad hangover that just wouldn’t go away, so sleeping seemed to be the best solution.

I got a slapped wrist from my GP on my return who insisted I should have seen a doctor while we were away, as I felt so bad. She called a neurologist at Addenbrooke's Hospital, who believed I might have suffered a mini stroke and was feeling the after effects. But when I looked it up on Google and read the effects “would pass quickly”, I remember thinking, “I’ve had these symptoms for nearly a year, and they aren’t passing, they are getting worse”.

I was booked in for an appointment a few weeks later with the neurologist, however it was Malc that said “I’m taking you to A&E!” only a week later. He knew that something wasn’t right and we needed to go to hospital to get a diagnosis of what was wrong. The first test at the hospital was walking in a straight line, which I failed miserably. Though it confirmed that something so simple, I wasn’t able to do. We waited for what seemed like ages before I was able to have a CT scan.

When the doctors came in to speak to me I thought, “If this is menopause then I have it really bad”. But when they said “brain tumour” I was relieved. Everything made sense. When they stated that it was a grade one meningioma, Malc nearly passed out, which is unusual for him as he is usually the calm one. They kept repeating “it’s a benign tumour” and reassuring me that they were 100% confident in removing through surgery. I was under strict instructions not to drive or have a bath without someone in the house in case I had a seizure. I was also banned from flying which meant the holiday Malc and I had planned for the following January had to be cancelled.

When I woke the following morning after hearing the news I decided I had a choice: either fall apart about the diagnosis; or accept it and get on with it. I chose the latter and decided not to tell many people. I actually don’t think I ever cried about my tumour. I just knew surgery was the only option.

Surgery was set for the 23rd December 2013, which meant our big Christmas plans to host all the family were called off. We did manage to get the kids round on the 22nd for a dinner, which felt like the Last Supper. I was pleased that I wasn’t going to miss seeing our kids, though I think the atmosphere was a little apprehensive. We all knew that I was going in for a serious operation the next day. Even though everyone was saying “It’s going to be OK”, I think my family had some worries but were hiding how they truly felt. My friend Mandy popped over that night to give me my Christmas present. She had tears in her eyes, said nothing, handed me the present and left quickly.

My surgery was over 11 hours long and I was informed that they had managed to remove all of the tumour. They said that the tumour had been growing steadily for about five years and was now the size of a satsuma.

The five days in hospital that followed were hard, I felt like my head had been kicked around a football pitch and I was very aware of the 9-inch scar on the back of my shaved head. Malc visited me as much as he could in hospital and took care of me when I returned home. I really appreciated Malc over those months of recovery. He made the best homemade minestrone soup.

I had three months off work to recover from surgery. When I returned back to work I saw my notes from before the operation and was shocked to see how bad my handwriting had become. No one had said anything!

I had a second round of surgery in December 2015 to remove fluid that had built up into a lump on the side of my head. I had been told having a ‘brain shunt’ fitted would resolve it, but after what I had read on the internet, I didn’t want to have it done and chose to wait. Luckily, I was able to have a second operation and the lump went down, but then returned later.

For a while now I have experienced fewer symptoms. The lump has gone down considerably since June, though I still experience numbness every day in my face, it’s not too unpleasant and I tend to only notice it when I am tired. Only now do I really appreciate the strain my body was under before I was diagnosed. I wish I had been confident in challenging the GP, but I just thought I was a bit ‘off’ and being silly. After a couple of weeks, I should have said something, and not waited for it to get really bad.

I was shocked to read that brain tumours kill more children and adults under the age of 40 than any other cancer, yet just 1% of the national spend on cancer research has been allocated to this devastating disease. It’s terrible to think that there is so little known about a disease that can affect such a wide variety of people.

Malc has been amazing through this whole ordeal and I don’t think I could have gone through it alone. This disease can make you feel very isolated and I have since had several people speak to me about their experiences of brain tumours.  Recently I became a grandmother and celebrated my 60th birthday, being able to enjoy myself at my party, surrounded by friends and family, made me realise how precious life is and how fortunate I have been. I even asked for donations to charity instead of presents.

I don’t know what the future holds or if the tumour will grow back. I have been clear for three years now, so am keeping my fingers crossed. I still have a bit of a lump on the back of my head, my hairdresser always jokes with me as he has to cut a different length on the side of my scar to cover up the bump and make sure it is even. You just have to laugh and enjoy life. There are so many people out there that have been given the awful news that they have just months to live, so I really do count myself as one of the fortunate ones. 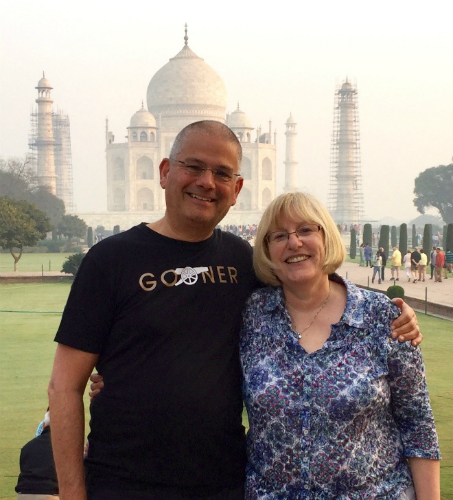