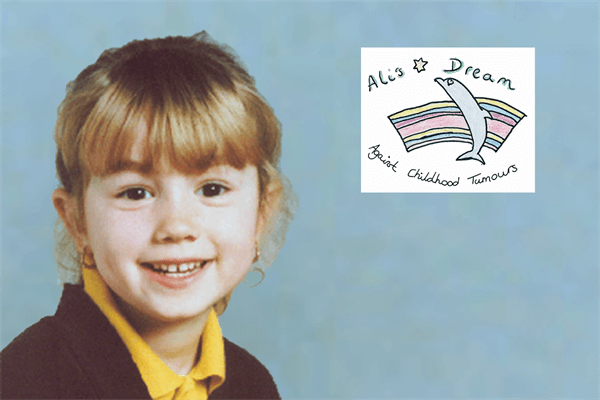 Ali’s Dream, a founding Member Charity of Brain Tumour Research, has announced it is to grant £250,000 to support research into childhood brain tumours at our Centre of Excellence at Queen Mary University of London.

The charity was set up by the family and friends of Alison Phelan after she passed away from a diffuse intrinsic pontine glioma (DIPG) in 2001, just three weeks before her eighth birthday. Alison was the niece of our Chief Executive Sue Farrington Smith MBE.

Professor Silvia Marino, who leads the team at Queen Mary, said: “This donation from Ali’s Dream will be instrumental in helping us to further our understanding of a number of high-grade paediatric brain tumours such as medulloblastoma, DIPG and ependymoma. The main treatments available to children with these brain tumours today remain, as they have for decades, surgery, radiotherapy and chemotherapy.

“These treatments can be effective and kill the tumour cells for example in a proportion of medulloblastoma patients; however, they almost invariably also result in severe side effects impacting the child’s physical and intellectual development, with hearing and visual disturbances, growth and hormonal changes, reduced fertility, behavioural changes, learning problems, difficulties with coordination and secondary cancers. In the case of DIPG, however, these current treatments invariably fail.

“We have recently employed powerful new genetic and epigenetic approaches to identify specific molecular changes that characterise a particularly aggressive subtype of medulloblastoma for which no specific treatment exists and we suspect similar mechanisms may also be at play in a proportion of DIPG. If we are successful in our evaluations, we hope our findings will provide an exciting opportunity to repurpose drugs currently in clinical use for other diseases.”

Alison’s family should have been celebrating her 28th birthday in June this year. Her mum Julie said: “Over the past two decades, I am proud to say that Ali’s Dream has raised more than £1 million and funded 10 childhood brain tumour research projects as well as collaborated with Brain Tumour Research and Charlie’s Challenge to establish the first Centre of Excellence in 2010. We have been supported by other families who have lost loved ones, including the D’Lima family who set up a Fundraising Group under Ali’s Dream called Jack’s Goal after losing 10-year-old Jack, nine years after diagnosis with an ependymoma brain tumour.”

Jack’s mum, Beverley, added that it was “comforting and exciting” to know that her son’s legacy is helping to fund research into paediatric brain tumours.