In May 1999, Sheila Hancock's grandson Jack was diagnosed with a brain tumour at just four years old. His mother, Melanie, was shocked at how long it took to diagnose him and at the nail-biting wait to determine the type of tumour and the treatment necessary. Reeling from the shock of diagnosis, they were delighted after several weeks of waiting to discover that they were one of the lucky ones - Jack's tumour was low- grade - and following five years of scans he is now scan free and living a normal healthy life.
Jack was just four years old when he began having a series of headaches coupled with vomiting on four occasions!

We saw various doctors, had various neurological checks, including one for meningitis. We were told to give him pain killers.  After the fourth occasion we were desperate – the pain killers were not working and the Calpol gave up.

On the fourth occasion when we were staying at my mother-in-law’s we saw her local doctor and we went to our own GP on the Monday.  We insisted there must be something wrong and that more needed to be done

We were given a hospital appointment for a CAT scan.

At that time I was going through treatment to donate my eggs to my sister-in-law. I was having horrible injections and feeling pretty poorly.  My mum was really upset and insisted that I should not go into the CAT scan with Jack because of the treatment I was having. So she went in with him, whilst we paced up and down outside.

They found bleeding on the brain and put us through torture as they asked questions such as had he had a fall, had he had a bug, even had we beaten him – we felt like we had done something wrong, we felt desperate.

The next minute we were rushed in an ambulance to Great Ormond Street Hospital.

The next day Jack had an MRI scan.  We then had the most horrific call to see the consultant.  I was immediately uneasy as they asked us to sit down, make ourselves comfortable and asked us if we wanted a cup of tea.

They then delivered the news – ‘Your son has a brain tumour!’

We were shocked.  Why us?  What had we done?

They prepared us for the surgery that had to happen in order to diagnose the type of tumour that Jack had.  They also told us about the risks – very scary.

To make matters worse my mum was rushed to Hammersmith Hospital with acute appendicitis.  My poor dad spent the next few days shunting between the two hospitals.  Dad couldn’t believe it – we were beating our heads against the wall.  My mum was incarcerated, they wouldn’t let her out.  She was desperate to be with us.  When anything is wrong with anyone she wants to be there.  Dad had to be diplomatic with what was happening from one hospital to the other.

In hindsight it was probably just as well that mum couldn’t be there with us - she is so protective of her children and grandchildren, so caring, she wouldn’t have been able to cope. As parents we don’t have the time to get hysterical, we can’t lose it, we have to focus on our child.

Jack’s operation lasted six hours – they gave us a bleeper in case they needed to get hold of us.  We disappeared in total silence, not knowing where to go or what to say to each other – just lost in our own numbness and thoughts.  This was and still remains the worst time of my life.

During the days that followed whilst he recovered from his operation, we just went from day to day, blocking out the nastiness of it all.

Jack recovered amazingly.  He refused to pee in a bottle and used to have five nurses trailing after him with drips, so that he could go to the toilet for a stand up pee!

He was incredibly brave.

During his recovery, because we had had so many warnings about the things that could go wrong during the operation, every little improvement was amazing.

We celebrated every little thing and felt each achievement was a miracle - his first words after the operation, his first walk.  It was such a joyful time – we didn’t think of the sinister aspects until much later on.

At the time we were having building work at the house so we moved in to Mummy’s.  It was still a joyous time, but we were waiting for the pathology report and a full diagnosis, in order to determine his treatment

This became nail biting as they could not identify his tumour and they were preparing us for the worse case treatment and chemotherapy.  Because of the tumour’s position in the brain it made them think Jack’s tumour was particularly malignant, but they were puzzled because it did not tick all the boxes.

It seemed serendipitous that a pathologist in another part of the country had just finished a report on ten other cases of a rare tumour, the description of which matched Jack’s exactly.

They decided that Jack’s tumour was low- grade and that he needed no other treatment. It felt like we had been let off the hook.

After two weeks of nail biting waiting, they were all ecstatically excited.  They were saying you are going to be fine.

Over the next five years we continually went for scans.  When Jack was nine years old we were told we didn’t need to go for scans any more.

This whole episode has been a life changer in all departments.

I thank God we were very lucky.

During this period, there were some extraordinary coincidences, we had good luck.  Fate was on our side.

I wondered if the egg donation wasn’t the right thing to do and that Jack’s illness was my punishment.  I stopped the treatment as it was getting in the way of me being able to be with Jack.  A few years later my sister-in-law fell pregnant naturally.

We all reeled after the shock of the diagnosis and reeled again at how lucky we are.

All of our friends were amazing.

Research into brain tumours is so important, there is such a huge vagueness about it all. If more had been known it would have made things so much easier and quicker for the diagnosis.

Brain tumours are incredibly common.  I am probably more aware of it now, but I know a lot of people who have experienced one – both adults and children.  Brain tumours are not as rare as people think!

When you hear the words `your child has a brain tumour' it is a nightmare.  There are so many questions, and too few answers.  We have got through it, but many families do not.  If more children are to survive rather than become bleak statistics there needs to be much more awareness and understanding of brain tumours.  Greater attention and funding for research and treatment of this disease is vital to give all children a chance. 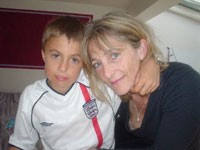