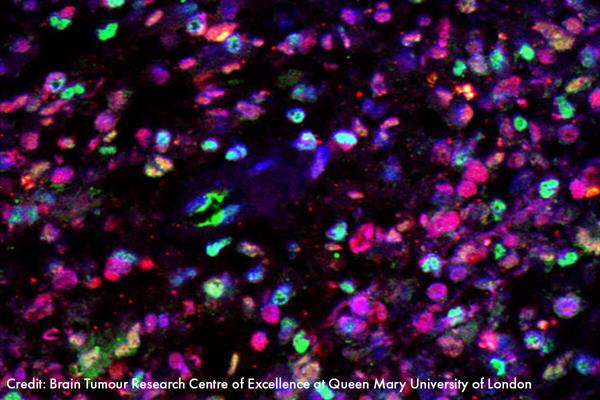 The team at the Brain Tumour Research Centre of Excellence at Queen Mary University of London has made a breakthrough which brings hope for patients with the deadliest form of brain tumour.

Scientists studying glioblastoma multiforme (GBM) – the most common and aggressive type of brain tumour in adults – have discovered a new way of analysing diseased and healthy cells from the same patient. The work could pave the way for truly personalised treatment for patients diagnosed with GBM.

The team has established an entirely new experimental research pipeline which, in a trial involving 10 patients, has revealed new insights into how GBM develops, identifying potential new targets for individualised treatments. It could also help predict a patient’s response to drugs currently in clinical use for other diseases, which would be extremely valuable as the average survival time for GBM is just 12 to 18 months.

Professor Silvia Marino, who leads the team, said: “We have used this powerful technique to identify changes in the function of genes that occur in GBM that do not entail a change in the genetic code (epigenetics). This has revealed new insights for how GBM develops and identified potential new targets for individualised treatments.”

Through a combination of laboratory work and sophisticated analytical computer programmes, the team has identified significant molecular differences which could be exploited to develop new treatments. It is an innovative approach enabling the comparison of normal and malignant cells from the same patient, helping to identify genes that play a role in growth of the tumour.

Hugh Adams, our Head of Stakeholder Relations, said: “The complex nature of this particular tumour type means that the standard of care for these patients has not changed in a generation so this research brings much-needed hope for the future. One of the main challenges in developing effective treatments for GBM is that the tumour exhibits significant variation between patients and there can even be significant variation within a single patient’s tumour. These variations can arise from change to the cell’s genetic code – known as mutations – combined with changes to how specific genes are controlled.

“There is strong evidence that GBM cells develop from neural stem cells but previous studies have not been able to compare tumour cells and their putative cell of origin from the same person. Prof Marino and her team have now harnessed state-of-the-art stem cell technologies and next-generation DNA sequencing methods to compare diseased and healthy cells from the same patient. Their results have shown how this approach can reveal novel molecular events that appear to go awry when GBM develops, thereby identifying targets for potentially new treatments.”

The results have shown how this approach can reveal novel molecular targets for potentially new treatments. For example, the results reveal how some GBM tumours can control the movement of regulatory T cells, a type of immune cell and has also revealed epigenetic changes that could be used to predict the response to drugs currently in clinical use.