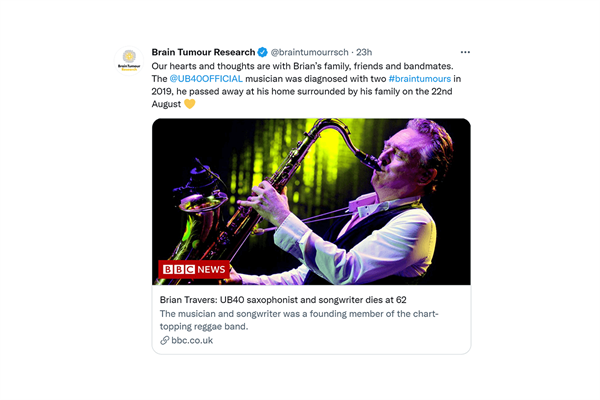 Tributes have been pouring in for the UB40 saxophonist and songwriter Brian Travers, who has died from a brain tumour.

Yesterday (23rd August), the band announced the death of their fellow musician in a tweet, which read: “It is with great sadness that we announce the passing of our comrade, brother, founding UB40 member and musical legend, Brian David Travers. Brian passed away yesterday evening with his family by his side, after a long and heroic battle with cancer.”

Brian, who underwent multiple brain surgeries over the past two years, died yesterday with his family by his side. He was 62.

Among the many tributes from the celebrity world, was a tweet from actor and Good Morning Britain presenter Adil Ray, who said: “I have lost a friend. Brian Travers you were my number one fan and I yours. You may have played your final note, but we’ll keep singing to your tune my brother from another. As you said in your final words to me, “shukria bro”. Love to Lesley, Lisa & Jamie.”

Fellow musician Paul Young tweeted a photo of him performing alongside Travers, with the words: “Very sad day (another..) to hear about the passing of Brian Travers from UB40. This photo is from 2018 when they asked me to perform Love Of The Common People with them, after I hi-jacked the idea in 1983! He was a driving force, full of energy & positivity; RIP Brian x.”

Radio presenter Adrian Goldberg tweeted: “So sorry to hear about the death of @BTUB40 – a genuinely lovely bloke and hugely talented too. Spoke to him a few weeks ago and he was full of big plans as always. Sympathies to his family and friends. He lived a life.”

Hugh Adams, Head of Stakeholder Relations at Brain Tumour Research said: “We were very sad to learn that Brian Travers has died from a brain tumour. Sixty-two is no age and it is these stories of premature loss that motivate all of us at Brain Tumour Research to continue in pursuit of our vision to find a cure for all types of brain tumours. We send our deepest condolences to Brian’s loved ones and look forward to the day when no more families have to be torn apart by this devastating disease. May Brian rest in peace.”