Why Rory volunteered to be a brain tumour activist 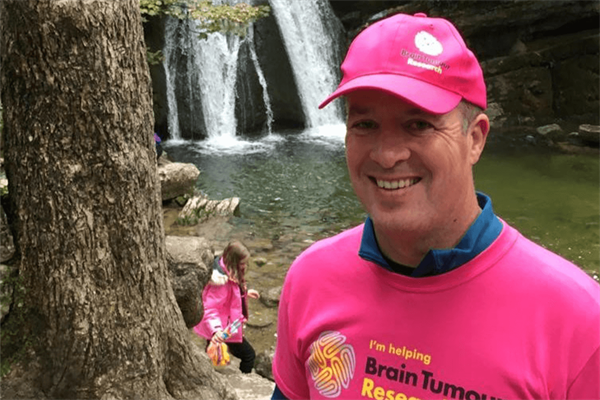 Leeds-based activist Rory Burke was catapulted into the brain tumour world after suffering from a seizure as he drove to work.

His world was turned upside down instantly, but he decided that he wasn’t going to let his tumour rule his life.

Rory began fundraising for Brain Tumour Research on his bike and has volunteered his time in helping us to make a difference. He has increased our visibility by engaging his beloved rugby team London Irish, including sharing his story in a match programme and sponsoring a player so our logo would be on display to his fellow fans.

Rory’s determination and tenacity has been really demonstrated by the time he has spent in engaging with his MP.

Rory said: “Hilary Benn is my MP and is a well-known political figure. I was aware of how busy MPs are, but that didn’t put me off. I invited him to the All-Party Parliamentary Group on Brain Tumours (APPGBT), I told him my story and I sent him the reports that Brain Tumour Research produces.

“Initially he wasn’t able to really engage with me, but he was always courteous. Over time though I think he must have just got fed up with me because not only is he now a regular member of the APPGBT, but he has also used his social media to support campaigns such as Wear A Hat Day.

“Getting to know the team at Brain Tumour Research has given me the confidence to be a brain tumour activist and I am proud that the time I have given to communicating with Hilary and also to supporting the charity on social media is paying off.

“I know giving your time to a charity and not being paid is called volunteering but for me it is activism and I would be doing it anyway, so I’m really glad I can do it for a charity that is making a difference.

“I’m proud of what I am doing it gives me a huge degree of satisfaction.”

To join Rory and campaign with us, please click here.