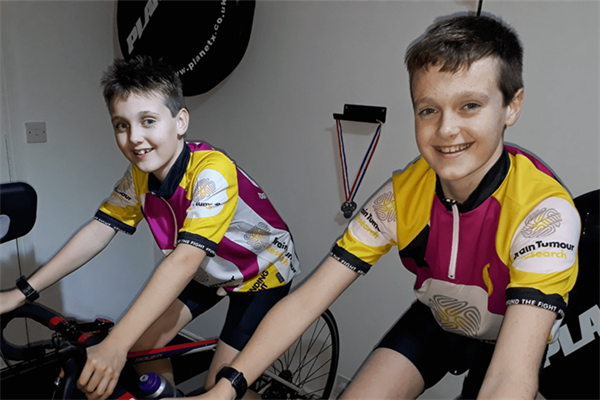 Two young brothers have started an epic virtual cycle to reach the summit of Mount Everest to raise money for Brain Tumour Research.

Eleven-year-old Josh Cleave and his brother Ben, 10, are spending two weeks of their Christmas holiday fundraising in support of their seven-year-old cousin, Jessica Groft, who has started a second round of treatment for an aggressive brain tumour.

Jessica was first diagnosed with a brain tumour when she was three and underwent 18 months of chemotherapy to shrink the tumour. Two months ago, a routine scan revealed regrowth and Jessica now faces another gruelling course of treatment.

Keen cyclists Ben and Josh started their challenge on Saturday and will climb 8,848m – the height of Everest - on static, indoor bike trainers. Over two weeks, they will cycle more than 400km in distance, climbing more than 500m per day and facing gradients of up to 20% in order to reach the summit by Sunday 3rd January.

Josh said: “When Mum and Dad told us that Jessica was poorly and has to start chemotherapy again, we felt helpless but wanted to do something. We’re both mad about sport and love cycling, so we thought we'd try and set a tough physical challenge, in order to raise some money. We really want to make a difference.”

Incredibly, the brothers raised nearly £4,000 before even beginning their challenge and appeared on Sky News to talk about their fundraising. They also received a special video message from 2018 Tour de France winner and double Olympic gold medallist, Geraint Thomas, wishing them luck for their challenge.

If you would like to support them, please visit their JustGiving page.