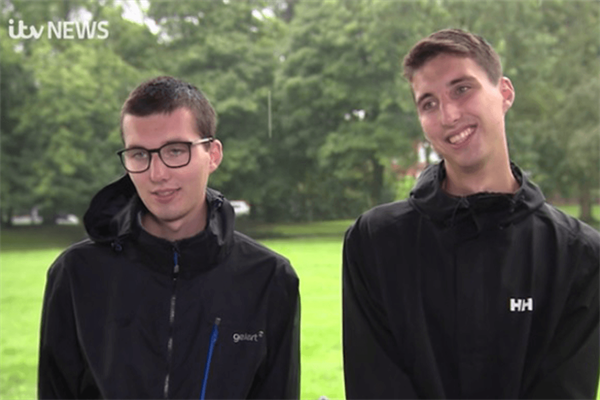 Identical twins from Greater Manchester are celebrating a huge boost to their fundraising, after their story captured the hearts of ITV Granada Reports viewers.

Seventeen-year-old Alex Pullan and his twin brother Matthew featured on the evening news programme on 18 August 2020, the day after Alex began a 5k-a-day running challenge to support Matthew, who is undergoing treatment for brain cancer.

Sixth former Matthew was first diagnosed with an ependymoma brain tumour when he was three years old. The tumour was successfully operated on and he recovered well, enjoying several years of stable MRI scans. However, earlier this summer a scan revealed a new 4cm by 4cm tumour in the cerebellum part of his brain.

Last month Matthew underwent more brain surgery to remove 99% of the tumour but the remainder is on his brain stem, meaning it is inoperable.

Meanwhile, as he begins a gruelling course of radiotherapy, Alex has pledged to run 5k every single day during his brother’s six week treatment, to raise money to help find a cure for the disease.

Matthew said: “I am so proud of Alex’s efforts, as it will hopefully result in fewer people going through the suffering I have endured twice. We are really close and share a love of running, so while I’m not able to run at the moment, this will be the next best thing, as I follow Alex’s progress.”