Talented artist and bass player, Thomas MacIntyre-Valentine, from West Yorkshire, was just 30 years old when he lost his life to a brainstem glioma. Thomas, who was married to Sheira, lived with his brain tumour for eight years but when it started to spread in February 2020, he declined quickly. As she continues to come to terms with the loss of her loved one, Sheira is hoping to make a difference and remember him by setting up a Fundraising Group in his name.

Thomas and I met in 2014, on a dating app called OKCupid. I’d been on other sites like Plenty of Fish and had some awful experiences. When I got a message from Thomas on OKCupid, I knew he was different and really liked his way with words. Referring to my tattoos, he wrote: ‘I like your neck’. My bio also mentioned that I liked rum and he told me it was one of his favourite drinks too. We hit it off immediately and although I was 20 years older than him, age didn’t matter and we found a lot of common ground. 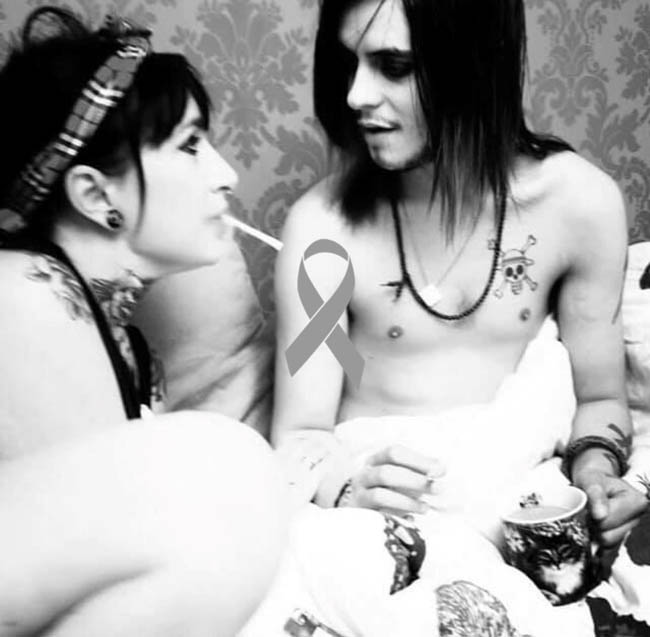 I suffer from a long-term health problem, lupus, and Thomas’s bio on the app mentioned his brain tumour. We talked about our conditions and Thomas was very open with me about his illness from the beginning. He told me he’d been diagnosed with a brainstem glioma in 2012. It was wrapped around his central nervous system and was inoperable. He’d been treated with radiotherapy and chemotherapy and had taken steroids, to reduce and prevent inflammation around the tumour. What struck me straight away was how well he seemed to deal with his diagnosis. He didn’t dwell on it and never moaned. It was as if it wasn’t a big deal to him.

“He had a positive outlook and did his best to enjoy life. This, in spite of the fact that he’d initially been given a prognosis of just two years. He accepted that he could die from it but didn’t let it get him down." 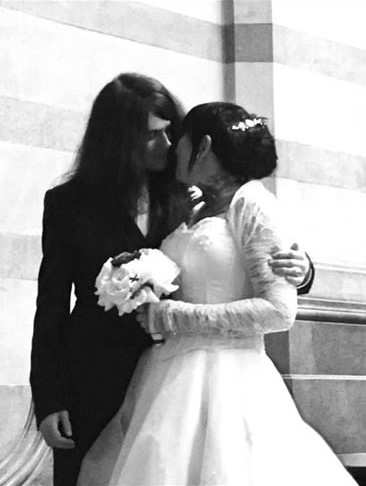 Thomas had six-monthly scans to monitor his brain tumour and, for a long time, they remained stable. In August 2019, another positive set of scan results meant that he was given the ‘all-clear’ and he was told that his tumour was unlikely to grow again. As a result, his routine scans were reduced to every two years.

Not long after that, however, I noticed that Thomas would get tired all the time. We’d just moved house and things were quite stressful, as we’d had problems with a terrible landlord, so I think we both put it down to that. He also had to take growth hormones, due to his pituitary gland being damaged from the cancer treatment. I wondered whether the cortisol dosage he was on wasn’t quite right and was causing his fatigue.

“Then, in February 2020, things took a turn for the worse. Thomas had become clumsy and was stumbling around a lot.”

He would appear really drunk after just one alcoholic drink. When he told me one day that he couldn’t remember how to swallow, I became really worried and made him an appointment with the doctor. He was also complaining that his face was going numb and on one occasion he said he thought he was going to die. Unfortunately, Thomas was terrible at getting up in the mornings and he missed his doctor’s appointment. I called to explain and they advised me to take him to A&E. On 17 February, I took him to St James’s University Hospital in Leeds and they did a CT scan, which was clear.

He was admitted and after five days, they did an MRI scan. The results, which we got the next day, showed ‘changes’ to Thomas’s tumour. Even though he was 30, he was sent to the Teenage Cancer Trust Young Adult Unit, which was great. He had a TV and a PS4 by his bed and there was a day care room with sofas, a juke box and a pool table. I wasn’t able to stay with him overnight but I would visit every day and spend all day with him on the ward. Each morning, I would wake up at home to a text message from Thomas. One morning, he hadn’t messaged me and I was worried so I sent him a text asking if he was OK.

“He replied with a photo of a post-it note, on which he’d scribbled the message: ‘I can’t walk and I can’t talk’.”

Terrified, I jumped out of bed, threw on some clothes and drove at breakneck speed to the hospital. There seemed to be so many road works that morning and I jumped several red lights to ensure I got there as quickly as I could. On my way there, Thomas called and his speech was all slurred and he was talking gobbledygook.

By the time I arrived, Thomas was also experiencing paralysis in his right leg and he had little feeling in his right arm. Overnight, his entire right arm became paralysed. He couldn’t talk at all and he’d lost his swallowing reflex. The nurses asked a consultant to come down and see him. When the doctor finally arrived, he said he wanted to do a biopsy, to confirm his tumour-type, so they could give him the correct type of chemotherapy. The next day, however, he was seen by another consultant, who said they didn’t have time to wait for biopsy results to start the chemo, as the tumour was so aggressive. I was shattered by this news and literally fell to the floor.

Thomas started on radiotherapy and chemotherapy but it didn’t really work. Some limited movement came back but his speech didn’t return. I cried and cried. Not wanting to leave his side, I moved into the hospital and slept in his bed. He’d become trapped in his own body and it was awful to witness. Like a true champ, however, he completed his course of radiotherapy and chemo, not yet ready to give up on life.

While we were in hospital, COVID-19 hit the UK and the country went into lockdown. It meant that I couldn’t leave the ward because if I did, I wouldn’t be let back on, due to the strict measures the hospital had to put in place. We spent six weeks there in total. One day, I had to nip out to get a WIFI signal, so I could pay our rent online. When I tried to come back, I wasn’t allowed back on the ward. A week later, Thomas asked the staff if he could be discharged, as he wanted to come home to die.

“We had a hospital bed delivered to our home. Thomas and I had spoken about the possibility of him going into a hospice but we were still in the throes of lockdown restrictions, which included no visitors in hospices.”

In any case, I was happy to take charge of his care at home. I knew that above all, he just wanted to be with me. 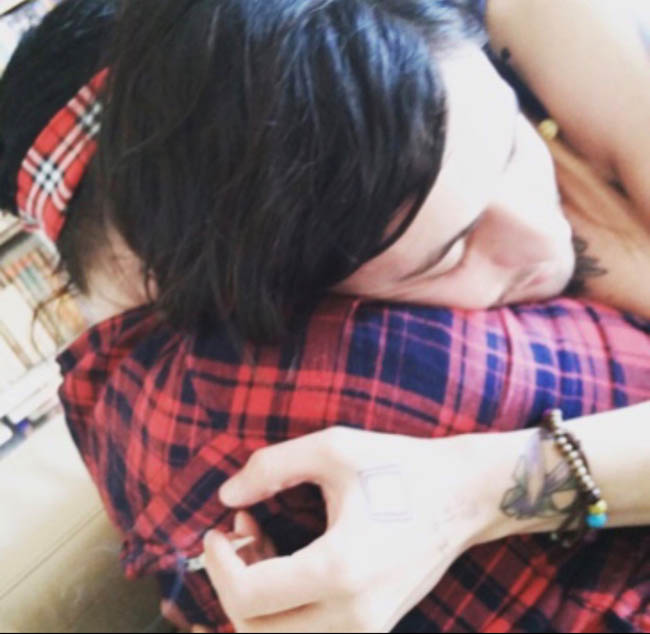 A few weeks after he came home, Thomas got a chest infection and became really poorly. On 28 May, he was taken to hospital in an ambulance. I couldn’t go with him in the ambulance and when I arrived at the hospital, I couldn’t stay with him but I would visit every day, wearing full PPE. He stayed in for four nights. When he came home, on 28 May, it became clear that he was nearing the end. The weekend before he died, he was screaming with the pain in his head, chest and bladder. It was horrendous. Carers came and fitted a syringe driver to administer morphine.

Gradually, he was less and less responsive and I knew we didn’t have long left. My mum died of cancer when she was 58 and I knew what to expect. The night before he passed, I had a funny feeling and so I made sure his best friend Ed was there, as well as my kids Molly and Etienne. Before I went up to bed, I put his favourite music on, an album by a Canadian metal band called Protest the Hero, and I lit some candles. Etienne went downstairs to get a drink just before 3am and he came up to tell me that I needed to be with Tom, as his breathing wasn’t right. Sure enough, Thomas had come to the end of his fight and he died in the early hours of the morning on 9 June 2020. I was completely devastated.

“Thomas’s funeral had to be scaled back, due to the coronavirus restrictions. We were allowed 10 people inside the crematorium and another 10 outside.”

All the chairs were set out six feet apart from one another. I was distraught and hysterical on the day. Luckily, we had a lovely, sensitive celebrant, who let us bring the chairs closer together, to allow us to comfort one another. I brought Thomas’s ashes home and they are next to his guitar and Pokémon collection. We’d discussed his wishes when we were in hospital and I’m glad I’ve been able to fulfil them.

It’s a year since Thomas died and the past 12 months or so have been vile. I try to keep myself busy, to distract from the horror of losing him but at night-time, I’m often hysterical and it’s getting harder all the time. One of the things I’ve become really passionate about through my terrible loss is raising awareness of brain tumours. I’ve joined online support groups for people bereaved by this cruel disease and it’s awful when you discover just how many young people are impacted. Not only young adults, like Thomas, but too many babies, toddlers and children are suffering and will continue to suffer at the hands of this disease, unless something changes. We desperately need more funding to find a cure. I know first-hand that fighting a brain tumour is brutal and seems crueller than other types of cancer. 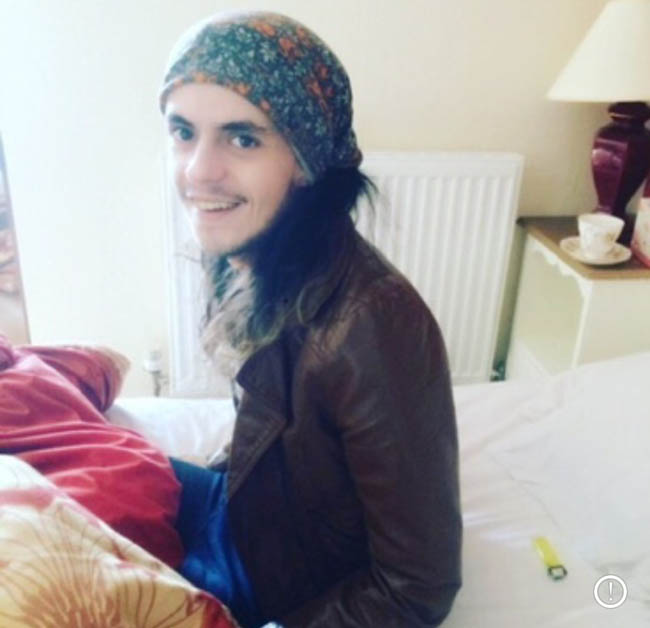 In Tom’s memory, I am setting up the Thomas MacIntyre-Valentine Memorial Fund, to raise money for Brain Tumour Research. Tom never thought he’d done anything worth remembering but I disagree. He was an extremely talented bass guitar player, artist and comic book illustrator. He was a wonderful person; non-judgmental and tolerant. He cared passionately about fighting discrimination. I want to make sure he’s remembered and the Fundraising Group will go some way to help ensure that happens, while raising money and awareness for this vital cause. 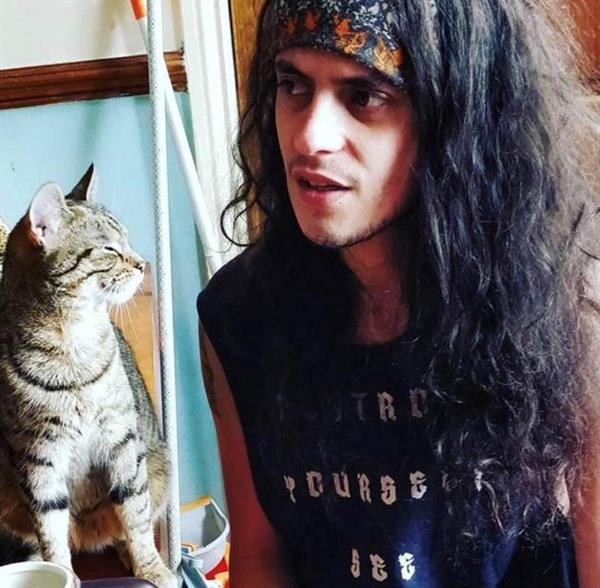