Stephen was an only son with three sisters Kerry, Carly and Sophie.  Out of the blue, at the age of 25, he had a huge fit on the football field.  He was diagnosed with a grade 2 oligodendroglioma mixed with grade 3 and underwent a craniotomy as well as chemo and radiotherapy.  Despite treatment, two years later, his stunned family found themselves saying goodbye to him.

“By this time I was very worried that Steve might have a brain tumour so I saw our GP.  He made me feel very silly, telling me: “25-year-olds don’t get brain tumours!”

Here is Stephen’s story as told by his mother, Pauline…

Stephen was born in Epsom, Surrey and we moved to the beautiful Dorset countryside when he was around seven, living first in Mosterton, before moving to nearby Beaminster when Steve was 16.  He went to Parrett and Axe Primary School and then to Beaminster Comprehensive.  A course in carpentry at Weymouth College led to Stephen working as a carpenter for a couple of local businesses before becoming self-employed.

In March 2008, Steve was 25 years old and a fit and healthy young man, playing football for Beaminster, when out of the blue he had a very bad fit during a match.  His Dad, Malcolm, thought Steve was dying on the pitch.  He was taken to Yeovil Hospital where he was examined by a doctor who decided Steve must have had a bang on his head during the match and that there was nothing to worry about.  He was sent home without even a scan.  Looking back I wished we had asked more questions and been more assertive.

Steve had another fit ten months later and we took him to Dorchester Hospital where doctors weren’t concerned enough to give him a scan then either.

By this time I was very worried that Steve might have a brain tumour so I saw our GP.  He made me feel very silly, telling me: “25-year-olds don’t get brain tumours!” and that many doctors never come across anyone with a brain tumour!  He definitely was totally ignorant of the fact that brain tumours are such a lethal killer of children and the under 40s!

After a third seizure just a week later, we were told that Steve must be epileptic and that they would need to prescribe drugs to control the fits.  All the time I was wondering why he had just suddenly started having seizures, so this time I insisted Stephen should be scanned. The CAT scan at Dorchester Hospital was inconclusive so he had an MRI scan the following day.  Alarmingly, the very same day we were in our local Cash and Carry when we had a phone call from the hospital asking if we were close by and able to bring Steve back, otherwise they would send an ambulance.

We knew at once that they had found something terrible and rushed back to the hospital, but instead of someone meeting us to explain, we were put in a waiting room with our minds in complete turmoil.  When a doctor finally called us in, he bluntly told us: “We’ve found something, but we are not sure what it is.  It looks inoperable.  Prepare yourself for the worst!  You will have an appointment at Southampton General next Tuesday.”  We were completely devastated.

Steve had always been so fit and well, although looking back I do remember a couple of occasions leading up to his first seizure when he acted completely out of character, getting over-angry with people.

He was kept in overnight and put on an extremely high dose of steroids.  During what turned out to be a two week wait for an appointment, Stephen was in agony and could hardly walk due to the severe pain in his legs caused by the steroids.

We met with consultant neurosurgeon, Mr Grundy, who was lovely.  He was concerned that Steve was on such a high dose of steroids and went on to explain that Stephen had three choices: the first, that the tumour was left alone, but Steve would become very ill; second, that he underwent a biopsy only at this stage to find out more about the tumour’s type and grade; and third, that he had both a biopsy and surgery to remove as much of the tumour as possible.  After discussion, we all felt that the third option was the best as it gave us more hope.

I rang Mr Grundy’s secretary the following day to let them know that Steve had opted to have the tumour removed and was told that the operation would take place within the next two weeks.

After another couple of weeks of waiting and no letter or phone call giving us a date for Steve’s operation at Southampton I decided to ring the hospital myself.  It was a good job I did as for some reason we had never received the letter asking Stephen to come in the very next day.

Steve had a craniotomy to remove all they could of what turned out to be a grade 2 oligodendroglioma mixed with some grade 3, but he wasn’t the same afterwards.  His confidence was totally gone and his speech was affected so he wouldn’t talk in order to avoid the embarrassment.

For six weeks, Steve underwent a course of radiotherapy at Poole Hospital and was then reasonably healthy for 18 months.

When he had another seizure in May 2010, he was put on a course of chemo to which he responded well initially before becoming immune to it.  I remember having to call out a district nurse who was annoyed she had to come all the way from Wincanton.  When she turned up she asked: “How long has he got?”  She then said:  “I haven’t got a proper needle, just a catheter, but that will just have to do!”

I said: “That’s my son you are talking about!”  I wanted to punch her.

The second course of a different type of chemo completely wiped him out.

We went to the Royal Marsden for a second opinion – Steve had been laid up in bed for three weeks, but he got up and managed to get in the car to be driven to the appointment.  There it was confirmed that Steve was being given the right treatment.

Steve continued to deteriorate until he couldn’t even hold up his head.  All the while I was looking after Steve myself at home with no help until his second lot of chemo when the district nurses came out twice a day.  Before that happened, however, a friend who worked in a GP surgery visited me and was appalled at how I was having to cope with no medical support.

Steve was admitted to Poole Hospital for the last time on 28th February where they told us he only had about ten days…  It was completely unbearable.  I was kicking myself for not pushing for him to have a scan when he had the first seizure playing football.  I felt and still feel that if he had been diagnosed ten months earlier the tumour may have been a lot smaller and Stephen would have lived longer.

The care and compassion of the doctors and nursing staff at Poole Hospital was outstanding (just like at Southampton General) and they allowed Steve’s friends to come in to visit him and as many as possible did.   There was also an amazing specialist nurse available who I could ring at any time.

Our darling only son passed away on 11th March 2011 in Poole Hospital.  His funeral took place on 28th March with over 500 mourners packed into the church.  The following day, 29th March, we buried Steve’s ashes on what would have been his 28th birthday.

I was dumb-struck when the GP rang to say he was sorry Stephen had passed away and then went on to say he had had another person die of a brain tumour the previous week!  It felt so matter of fact, so callous, especially recalling how dismissive he had been of my fears that my 25-year-old son had an undiagnosed brain tumour… “25-year-olds don’t get brain tumours!”  At least the vicar at Beaminster Parish Church, Rev David Baldwin, was full of compassion and support.

I was so shocked to learn that research into brain tumours is so badly underfunded yet it is the biggest cancer killer of the under 40s with our gorgeous only son being one of them.  It is totally outrageous.  I can’t do anything for Stephen but I can raise awareness that brain tumours can happen to anyone and that patients in GP surgeries CAN present with brain tumours at the age of 25, as well as much younger.  I want to do anything I can to help Brain Tumour Research and hope that Stephen’s legacy will lead to better awareness among GPs.

It still feels like yesterday that we lost Steve, but the birth of our little grandson, Freddie Stephen, Carly’s son, born on 14th June 2014 has helped. It is strange that Freddie’s birthdate is 14.06.14, while Steve, the uncle Freddie will never get to meet, passed away on 11.03.11.  Freddie Stephen keeps us busy and has helped put a smile back on my face. 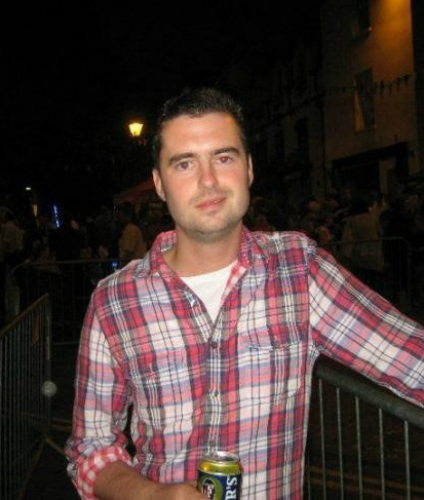