We are grateful to Ronnie, his son George and wife Caroline, who worked with us in November 2018 to share his story here. Sadly, Ronnie passed away on 27th December 2020. We remember Ronnie as we continue our work to raise awareness of this devastating disease and to fund research to help find a cure. He will be forever in our hearts.

In 2014, aged 41, Ronnie Perring was diagnosed with a low-grade brain tumour and the hard-working, family man’s life was turned upside down. As he underwent two surgeries, radiotherapy and chemotherapy, Ronnie was forced to give up his livelihood and stop running the family’s floristry business at Portobello Market. Despite his tumour transforming into an aggressive high-grade glioblastoma in 2015, Ronnie has come back fighting with the love and support of his wife Caroline and their three children.

“But he’s a fighter and he always comes back fighting. I feel helpless but I want to do something to show him how much I care... I can’t reverse time and help Dad but I can help raise funds towards research into this horrible disease and help prevent others from suffering like he has.”

Here is Ronnie’s story, as told by his son George and wife Caroline…

Summer 2014 started off on a high; I was 18 and I was in Spain celebrating the end of exams and my unconditional offer to study at university in Nottingham. Meanwhile, my parents were in Italy on a family holiday.

However, when I got home, the bubble burst. My older sister Beckie greeted me in hysterics saying that something was wrong with Dad. He’d taken a funny turn on holiday after jumping down some stairs with his niece and then he’d suffered a seizure during the night. I kept asking for an explanation but Beckie didn’t have one and neither did my mum. Dad had been rushed to hospital in Italy for scans and all they deciphered from the foreign language was that ‘something’ was on Dad’s brain.

From this day, life hasn’t been the same.

Mum and Dad flew back home as soon as possible for more tests and more answers. It was my uncle who broke the news to me, Beckie and our little sister Jessica: ‘your dad’s had a full body CT scan and they’ve found two tumours – one on his brain and one on his kidney.’

Part of Dad’s kidney was removed through keyhole surgery and not long after he got the all-clear. The brain tumour, however, wasn’t going to disappear so easily. It was a low-grade astrocytoma but as this type of tumour is star-shaped, it couldn’t be cut out easily. Nevertheless, the surgeons were confident that surgery was the right option and in September, Dad underwent a 10-hour operation and then started radiotherapy and chemotherapy.

The impact of the surgery was life-changing. He lost so much strength and his speech and mobility were affected too. Dad was a hard-working man and loved his job running our family business, The Flowered Corner, on Ladbroke Grove. He would be out the door at 5am every morning, not getting home till 8pm most evenings, and he’d worked there since he was a boy. But this all changed after his surgery. All of a sudden, he couldn’t work anymore and he lost all independence. This has been the hardest part for him. He used to do everything for the family but for the last four years he has been helpless and relying on everyone else – he can’t stand it.

But he’s a fighter and he always comes back fighting. I feel helpless but I want to do something to show him how much I care, so I’m going to run London Marathon 2019 in his name. I can’t reverse time and help Dad but I can help raise funds towards research into this horrible disease and help prevent others from suffering like he has. Dad has always encouraged me to be the best I can be at sports, and although he can’t talk, he always makes a sound of recognition when I get home from training. I hope I can make him proud.

After Ronnie had his first operation, the doctors had said: ‘see you in a year’s time’ but in May 2015, eight months later, I was so concerned that I had to phone the hospital. His face was drooping on one side and I just knew something wasn’t right.

Ronnie was booked in for a scan one Friday in June and by the following Wednesday, he was back in the operating theatre for yet another 10-hour operation which was performed while Ronnie was wide awake and alert. The scan had shown that the tumour was back and it was now a high-grade glioblastoma.

My Ronnie was slowly slipping away right in front of my eyes and there was nothing I could do to help him. The disease was robbing him of so many things and now his personality was changing too. Gone was the joker and fun-loving guy I’d met when I was 21. Now he can hardly walk and can only respond with ‘yes’ or ‘no. It’s heart-breaking to think I’ll never have a conversation or share a joke with my best friend and husband again.

We’d been together for nearly 25 years when Ronnie was diagnosed; our families knew each other from Portobello and we were childhood sweethearts. We’d never gotten around to getting married – I suppose we just knew we would be together forever – but after his diagnosis we planned our wedding and tied the knot all within half a day.

After the second operation, Ronnie suffered terribly from seizures and ended up having a shunt fitted to drain the fluid on his brain. He continued on chemotherapy while the kids and I cared for him and tried to keep each others’ spirits up.

Back when he was first diagnosed, we asked the doctors if we should use our private healthcare insurance and they said: ‘no, keep that in your back pocket until you really need it’. That time came around in the summer of 2016. Ronnie’s platelet count was too low and he couldn’t continue on chemotherapy but he could try immunotherapy privately.

In February 2017, Ronnie had a further scan and we hoped that we’d see some progress after six months of immunotherapy. Instead, we were told to get our ducks in a row. It seemed that Ronnie was nearing the end.

That was the last time we put Ronnie through the trauma of a scan. When you’ve been told once that there’s not long left, you don’t need to hear it again. We know the tumour is growing so what good is it being told over and over again? That’s the thing with incurable diseases – the treatments and the endless scans all just seem so futile but still you build your hopes up, thinking that maybe, just maybe, there will be some improvement.

The following August, we celebrated in more ways than one as our eldest daughter Beckie got married and Ronnie was there to give her away. He even mustered the strength to walk her down the aisle. It was such a special day and we’ll treasure the memory forever.

Over a year has passed since then and I’m delighted that Ronnie is still with us and undergoing immunotherapy. As George says, Ronnie always comes back fighting and we couldn’t be more proud of him. 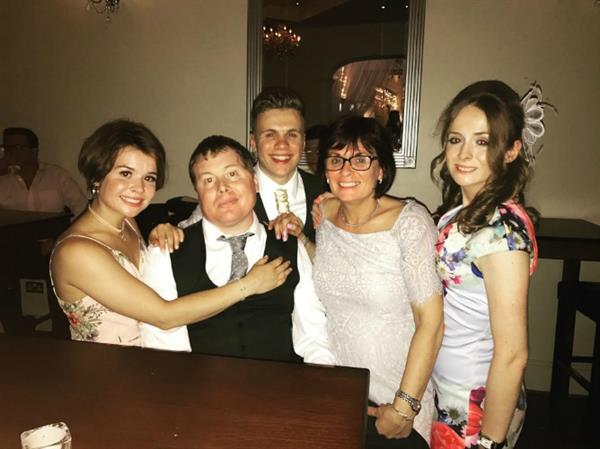