Robin was a strong, healthy, happy and very sporty 36 year old, looking forward to the birth of much longed for twins, when, without warning, he was diagnosed with a grade IV glioblastoma brain tumour - one of the deadliest forms of cancer. Only 17 months later, on 24th August 2011, Robin died aged just 38.
In March 2010, Robin’s wife, Catherine, was seven months pregnant with their much wanted twins when, out of the blue, Robin developed a sudden, crashing headache which became progressively worse.  He had shown no other symptoms, yet just four days later, in the A&E department of the Ulster Hospital, he was diagnosed with a brain tumour.  Whilst there he suddenly deteriorated and lapsed into a coma and within hours of arriving at the Ulster was transferred to the Royal Victoria Hospital accompanied by two doctors and an anaesthetist, where he underwent major brain surgery to try to save his life.

Although the surgeon was able to remove most of the tumour during the seven hour operation, the prognosis was poor.  We were informed that Robin’s tumour was a grade IV glioblastoma multiforme - the most aggressive type of brain cancer - and was incurable. Radiotherapy and chemotherapy would be used to try to contain it as long as possible but the tumour would eventually recur.  We were devastated and knew that, from then, our lives would never be the same again.

Robin then faced six weeks of daily radiotherapy, during which time his beautiful twins, Rory and Rachel, were born on 19th May 2010.  Although he was exhausted from the effects of the treatment, he played a full role in caring for his babies.

Seven months of chemotherapy followed, during which time Robin faced yet more distress when his dad died in a tragic accident.  Despite his grief and his own situation, Robin’s only thought was for his mum and sister and how he could help them.

In November 2010, at the end of the course of chemotherapy, a scan showed no sign of the tumour and we were both relieved and elated as it seemed he was winning the battle.

However, fate was travelling faster than we were and sadly Robin’s tumour returned with a vengeance four months later in March 2011, just one week before he was due to return to work.  Further surgery was not possible.  More chemotherapy was the only option, but after the second cycle Robin was told that the treatment was not working and there was nothing more the doctors could do.

In the last few weeks of his life, this appalling illness robbed Robin of so many things: the ability to walk unaided; to communicate with the people he loved; his memory and eventually his eyesight.  Perhaps worst of all, it prevented him from caring for his beloved twins.  Despite this, Robin fought on to the very end.


Robin died on the 24th August 2011.  He was just 38 years old and left behind the little family he adored – Catherine and their beautiful 15 month old babies – and his devastated immediate family.

Whilst we will never understand, in this life, why Robin was so cruelly taken from us, we thank God that he was spared long enough to experience the joy the birth of his beloved babies brought him; the pleasure and pride he felt at their first birthday party surrounded by close family and friends and the comfort he got from always knowing how very much we loved him.  From day one we promised we would walk hand in hand with him all the way, and we did.

We are left with broken hearts, but no 'if onlys'.

It was always Robin’s intention to raise funds for brain tumour research when he was well again and we are determined to do this in his memory through the setting up of the Robin Menary Foundation, a fundraising group of Brain Tumour Research.  It is this which keeps us strong despite the unbearable grief, and it is our dearest wish that someday someone diagnosed with this type of tumour will be told they can be cured. 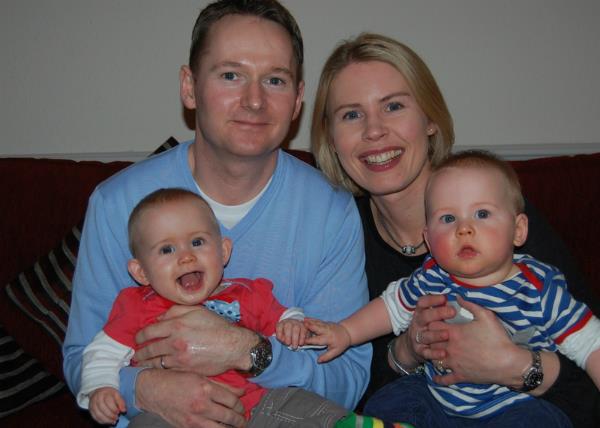