Pete was an electronic engineer working for BT, a loving husband and a proud father of two grown-up daughters – Alice and Emma.  A gentle, kind and fun-loving man, he would do anything for “his girls”.  Following a series of seizures, a bleed on the brain and subsequent surgery, Pete was diagnosed with a grade 4 glioblastoma multiforme (GBM4).

“Whilst it is a mystery how Pete died, and whilst cancer and its rigorous treatment most certainly had some part to play, we are all glad that he didn’t die of the tumour.  I tell myself that we have been blessed.  Even though at 60 Pete was very young to die, we were saved from the inevitable slow and agonising process, which sadly so many brain tumour patients have to endure.”

Here is Pete’s story, as told by his wife Jane…

I met Pete when I was training to be a teacher.  Pete had just finished his degree at Hatfield Poly, supported by BT, and had started management training with them.  One evening, I went to see Dame Edna Everage with my friend and fellow student Imogen and her boyfriend Ian.  Ian also brought his friend Pete along.  It was almost like a blind date, although not intended as one.  Nevertheless, our romance blossomed quickly as he was such a kind, gentle man, very tolerant and easy to be with.  He was also huge fun, so life with him was always exciting.  We went to lots of concerts, including the Rolling Stones and Bruce Springsteen.  I am so thankful for so many great memories.

It was in the middle of one night in October 2014 that Pete woke me. I don’t know whether he jerked or what, but I leapt out of bed and found my glasses and called for an ambulance.  It was thought he had suffered a stroke or a small heart attack.

A month later, we were in a restaurant when Pete had what turned out to be a seizure.  It lasted for about 15 minutes.  Again we went to the hospital where Pete had an MRI, but, with nothing conclusive, he was given seizure medication.

Almost like clockwork, Pete began experiencing incidences every month.  I started dreading them.

He was diagnosed in January 2015 with a tumour and referred to Queen’s Square Hospital in London. I felt frightened and anxious, fearing the worst, but at the same time I couldn’t believe it could be.  As a result of these developments, Pete was put on steroids. This was the only time that I ever experienced Pete being difficult to live with; there were times when he could be sharp-tongued and unkind, and that just wasn’t him.  As you can imagine, Pete hated being on them.

Surgery was eventually planned for mid to late April.  There didn’t seem to be any urgency and the surgeon seemed happy that it could be delayed until she had come back from a trip.

Easter weekend, everything changed.  We had another emergency visit to the hospital and further scans revealed that the tumour was now the size of an orange.  Pete’s condition became an emergency.  He was moved to Queen’s Square the following Wednesday and underwent surgery on 10th April, during which they were hoping to remove around 95% of the tumour.   In the event they were successful in removing even more.

It was then that we were given the shocking news that Pete had a grade 4 glioblastoma multiforme (GBM4).  It was all too heart-breaking, but for Pete, all he wanted to know was how the surgery was performed.  His quick brain and fascination for finding out how things worked continued throughout his illness; he would make lists of questions to ask the doctors and nurses who cared for him and took videos of the machines that treated him.

We were never told the exact prognosis.  Pete underwent radiotherapy and chemo simultaneously, although sometimes he wasn’t well enough.

During his treatment, Pete became very breathless.  He was having weekly consultations at Mount Vernon Cancer Centre in Northwood, Middlesex, but didn’t mention this.  As his carer, I felt I needed to say something. He was given an X-ray and they found he had a blood clot on his lungs.  As a result, he had to have injections in his stomach for six months; something I was trained to do at home… and hated.

In June 2015, Pete reached the last day of his radio and chemotherapy treatment.  He flopped on the settee when we got home and I gave him the post to sort while I made a cup of tea.  When I came back into the room, Pete handed me an envelope and said: “This one’s for you.”  He had bought me some vouchers for Champneys.  He said: “It’s time for you now – thank you for looking after me.”

At the end of June, we were back at our local hospital.  Pete had been trying to put a t-shirt on, but it seemed he couldn’t figure out what it was or how it worked. It felt to me like he was brain-damaged and not in control, which was so different to the normal Pete – always on top of everything, particularly all his medication.  The hospital said that this was a result of fluctuations in medication.  After 24 hours in hospital he seemed back to normal.

We decided at this point that we needed some time for us; to be together as a family. Pete turned 59 in July 2015 and we took him to Southwold as a surprise.  It was a place where we had enjoyed many happy family holidays. In the back of our minds, we worried that this could be his last birthday, but we had a wonderful time, adding to our memories there.

As a couple, we were always fairly active in going for walks and enjoying each other’s company in the English countryside. Throughout Pete’s illness his mobility reduced.  As with most things, there were good days and bad days and in line with everything he faced, Pete was determined not to let it stop him if he could help it.

We were supported by physio nurses who provided walkers that we were able to take outdoors, even through the woods, so as to try and keep a little bit of normality in our life.  We were directed by Ruth, a Macmillan nurse, to Keech Hospice, and also to Active Luton; a fun programme to encourage exercise in cancer patients.  On the last of these, he walked two and a half miles to a pub and then wanted to buy drinks for everybody.  He even took up yoga to strengthen his back as he had two crushed vertebrae as a result of the treatments making his bones more brittle.

On 18th August 2016 we finally got some good news: Pete was in remission!

Having left so many doctors’ rooms with only an updated plan of attack, it was strange to come out with only one goal: to go and enjoy each other's company.

One week later, on Saturday 27 August I had set my alarm so as to get up and make cheese scones for the village flower and vegetable show, where we were going to have a craft stall to raise money for Brain Tumour Research.  I got up and made Pete his morning cup of tea. When I went back in, after making the scones, Pete was on the floor.  His position was very strange and I think, in my desperation, I believed he was still breathing.  I called 999 and the ambulance arrived.  After 20 minutes of them trying to resuscitate him I was asked if I wanted them to continue.  Pete and I had discussed what he would have wanted in this situation and it was then that everything stopped.

Whilst it is a mystery how Pete died, and whilst cancer and its rigorous treatment most certainly had some part to play, we are all glad that he didn’t die of the tumour.  I tell myself that we have been blessed.  Even though at 60 Pete was very young to die, we were saved from the inevitable slow and agonising process, which sadly so many brain tumour patients have to endure.

Since losing Pete, my girls and I have set up Fluffy Cloud and Co. to support the work of Brain Tumour Research, raising awareness of the disease and ensuring funds for research facilities.

We would like to acknowledge and give our grateful thanks to all the medical teams that encouraged Pete through his illness: in particular Dr Gadj, Sister Mira and staff on Ward Four at Luton & Dunstable Hospital; Miss Sethi, George Samandourous and staff at Queens Square London; Maggie Fitzgerald, Paul Mulholland and Professor Hoskins at Mount Vernon; and for the support of Brain Tumour Research, Keech Hospice, Macmillan, and the many friends and family who have all surrounded and supported us.

Finally, we give our thanks to Pete. Our inspiration, always having the answer, always there, always helping, always Pete.

If you have been inspired by Pete’s story, you may like to make a donation via www.justgiving.com/fundraising/Fluffycloudandco or leave a legacy in your will via https://www.braintumourresearch.org/legacy 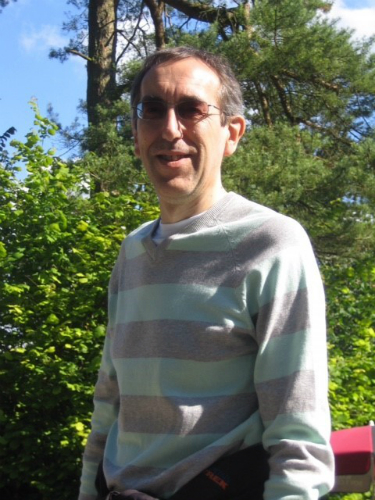