When Ingrid Wassenaar’s mum, Paula, was diagnosed with a brain tumour, she never underestimated the hardship that would ensue. However, the shocking realisation that an individual’s financial situation, good or bad, determines their end-of-life care soon added to her heartbreak.

“We were still reeling from Mum’s diagnosis and prognosis, when we found ourselves standing in hospital corridors, being told there was no possibility of a hospice place for our mother. Her financial situation meant that the only NHS hospice in the area was not available to her. Instead, she was left with no option but to go to a non-specialised nursing home, paying huge fees. We knew that a hospice would have been better placed to meet her needs, but it simply wasn’t available.”

Here is Paula’s story, as told by her daughter Ingrid…

My mother, Paula Wassenaar, née Lawrence, was born in East Finchley in February 1936. A keen gardener, who also enjoyed weaving and sewing, she gave my brother and me the best upbringing we could have asked for and was endlessly gentle, calm and kind.

Her gentle exterior, however, masked a true adventurer’s spirit. After grammar school at Henrietta Barnett, she won a place at Homerton College in Cambridge to train as a teacher, and then landed a job with Royal Dutch Shell the minute she could – she longed to escape post-war Britain, and travel! She taught all over the world, including Venezuela, Gabon and Borneo, where she met my father. They moved to Norwich to raise their family, and remained there after retirement.

Perhaps because of her wartime childhood, Mum was strong, stoical and independent all her life. After my dad died in 2005, she continued to travel solo; she went on trips to discover weaving in India, Nepal and Peru, and continued to create beautiful textile work at home. By now she had acquired four spirited grandchildren, all of whom loved her dearly. Staying with Granny P was a highlight several times a year.

In February 2017, my brother – Pierre – and I began to realise that something was wrong. Mum was a keen writer, so when she suddenly stopped being able to use her left hand, the hand she writes with, we quickly became worried.

The battle to get a diagnosis became the first of many hurdles. Mum started to struggle to cope at home, which meant that I started to struggle down in London too, as anxiety about her took its toll. Having gone through numerous GP appointments, it took Mum standing in front of the GP’s receptionist, holding out her useless left hand, to be taken seriously.

An MRI scan on 10th March 2017 gave us an answer. It was immediately clear Mum had a glioblastoma multiforme, a highly aggressive type of brain tumour. Though a biopsy promised a clearer diagnosis, Mum refused this as an option. She knew she was dying.

She was offered chemotherapy and radiotherapy, but her decision was already made. The treatment options were only palliative and would have meant travelling from Norwich to Addenbrooke’s in Cambridge. Though Mum had loved to travel the world, this was a journey she was not willing to take.

Things changed very quickly – within two weeks of Mum’s scan, she was bed-bound in hospital, unable to walk. We were told she might only live for six weeks.

The challenging logistics of Mum’s end-of-life care, however, were only just beginning.

We were still reeling from Mum’s diagnosis and prognosis, when we found ourselves standing in hospital corridors, being told there was no possibility of a hospice place for our mother. Her financial situation meant that the only NHS hospice in the area was not available to her. Instead, she was left with no option but to go to a non-specialised nursing home, paying huge fees. We knew that a hospice, with palliative facilities, would have been far better placed to meet her needs, but it simply wasn’t available.

The daily routine of hunting for change to cover the huge daily parking fees at the hospital began to pale in comparison with what was coming.

Now, grieving, only two weeks on from diagnosis, we had to decide where Mum would spend her final days. She asked me to make the decision for her. Although she was lucid, she could not remember the name of her condition. I raced round, looking at care homes, and trying to understand which one might offer the best end-of-life care. I had no idea what I was doing, and although the hospital social workers were kind, their hands were essentially tied – they could give very little support

Her transition from hospital to a nursing home was a murky time. Before she was discharged from hospital, she was not deemed eligible for any financial support, although she could not walk or care for herself. It was clear she was expected to pay for the full £4,000 a month cost of the nursing home herself. It felt like walking off a cliff.

Thankfully, Mum had a Shell widow’s pension which almost exactly covered the monthly cost of her home. She had enough savings to cover the utility bills for her own house, so money for her care was not directly an issue. I was shocked, however, at the enormous care home fees, especially when I began to realise how basic the level of service really was. Mum’s caregivers were wonderful, wonderful people, but the home was understaffed and they were stretched to their absolute limit. There were no palliative therapies or counsellors available at the home.

As the weeks and months went on, the emotional side of things began to take its toll. We wanted Mum’s suffering to be over, we couldn’t stand to see the person we loved so dearly struggle so mercilessly at the hands of this tumour.

While Mum had her costs covered, money became a pressure in my own life. I was forced to stop working as a freelance teacher while she was ill, so that I could spend as much time as possible at the home, trying to supplement where the carers could not be with her. I asked my brother permission to use Mum’s money to pay for petrol, which he was happy with, and we watched her slowly slip away from us over the passing months.

Mum passed away on 8th September 2017, living six months after her diagnosis and defying her six-week prognosis. For me, losing her has been the hardest struggle I have ever faced. My own cancer the year before was a walk in the park by comparison.

My brother and I adjusted to solving financial problems as we went along while Mum was ill. It has taken me time to rebuild my work as a tutor in the wake of Mum’s death, and money has continued to be a worry until fairly recently.

Throughout Mum’s time in the care home, I thought about the people that weren’t in her position, who couldn’t afford the costs of their care. I am privileged to be joining the All-Party Parliamentary Group on Brain Tumours (APPGBT) at an inquiry into the economic and social impacts of the disease.

I remained shocked, first of all, about how little treatment was possible following her brain tumour diagnosis, but secondly about the terrifying financial burden suddenly imposed on her, after a lifetime of good health. It was frightening to realise how woefully underfunded and inadequate end-of-life care in this country really is, and how little specialist care for those with brain tumours actually exists.

This welfare standard is simply outdated and unacceptable. 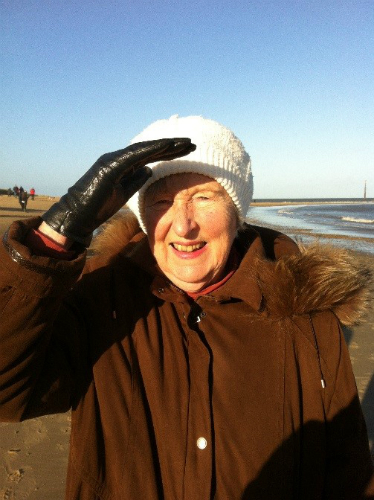