We are grateful to Neil and his wife Emőke, who worked with us in September 2020 to share his story here. Sadly, Neil passed away on 23rd December 2020. We remember Neil as we continue our work to raise awareness of this devastating disease and to fund research to help find a cure. He will be forever in our hearts.

Neil Matheson, from Dundee, was diagnosed with a deadly, grade 4 brain tumour in June 2018 after suffering from excruciating headaches and blurred vision. He was initially told he only had 12 months to live. Since his diagnosis, he has gone through gruelling brain surgery and cancer treatment to try to extend the time he has left with his young family.

Neil’s story is told by his wife, Emőke…

I am originally from Hungary and Neil was born in Dingwall, Scotland, but grew up in South Africa. We met in London; he worked for a security agency and was sent over to the hotel where I used to work at the weekends. We fell in love, got married and in 2015 we had our daughter, Isabelle and we moved to Dundee in Scotland. 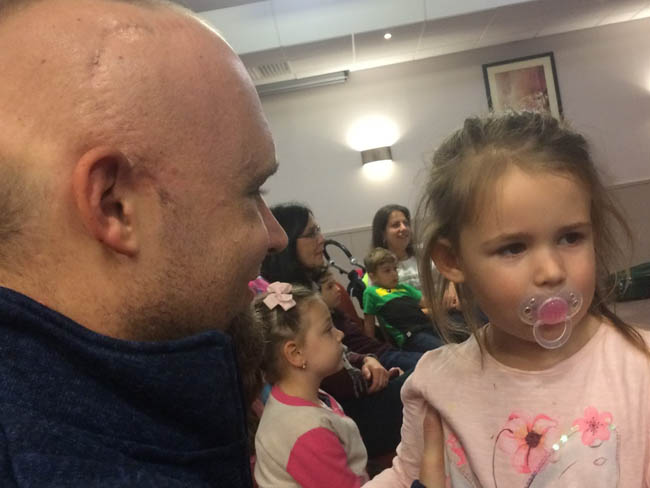 In 2017, Neil, who was 33 at the time, began suffering with debilitating headaches, so bad that he would sometimes pass out, even collapsing while we were out enjoying a family meal. By spring 2018, he was experiencing more and more pain, to the point where he would drop to the floor, with the feeling of electric surges trying to escape his head. We later discovered that these were seizures; they became more frequent and would last around 10 to15 minutes, manifesting themselves more in the evening when he was tired. He was also experiencing blurred vision and so, eventually he went for an eye test at Specsavers Opticians. During the appointment they discovered something abnormal in the back of his eye and he was quickly sent to Ninewells Hospital in Dundee, to undergo further tests. Following an MRI scan, in June 2018, it was discovered that Neil had an aggressive and incurable brain tumour, known as a glioblastoma multiforme (GBM). The prognosis for this type of tumour is devastatingly short, with an average survival of just 12-18 months.

“The news came as a huge blow and we were both devastated. The doctors told us that if he had waited one more month, he would have been dead already.” 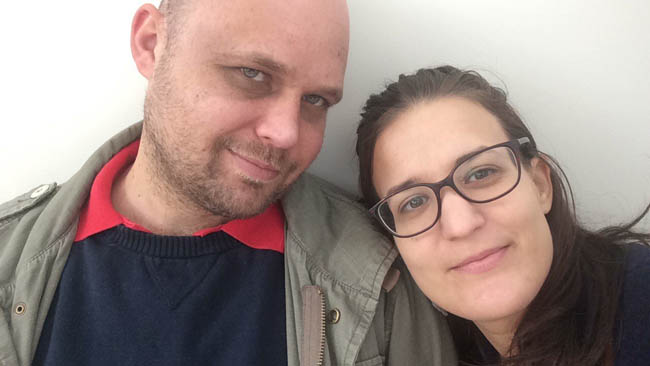 Once he was diagnosed, the medics decided they would have to operate quickly and so just two weeks later he was in theatre having eight-hour brain surgery to ‘debulk’ the tumour, which we were told was the size of an apple. The surgeon was aiming to take out 40% of the tumour but amazingly he managed to take out 100%. It was such a relief to hear that the surgery had been a success. 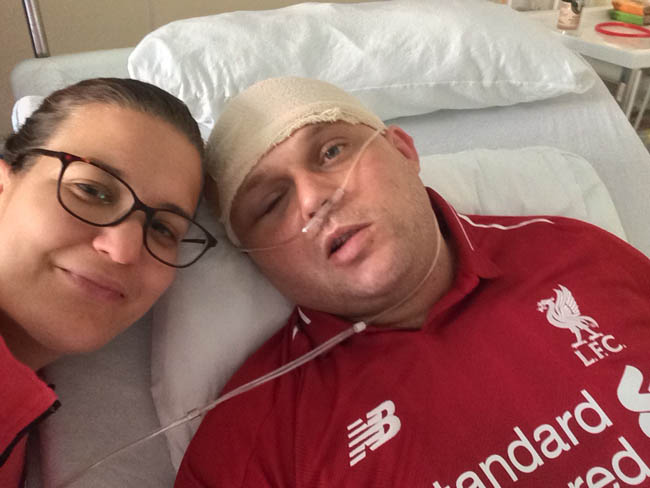 The operation was followed by an intense course of chemotherapy, which really took it out of Neil. It made him tired and he had constant aching muscles in his legs. He managed five out of six cycles of chemotherapy, after which he had some respite with several months of ‘stable’ scans showing no regrowth of the tumour. 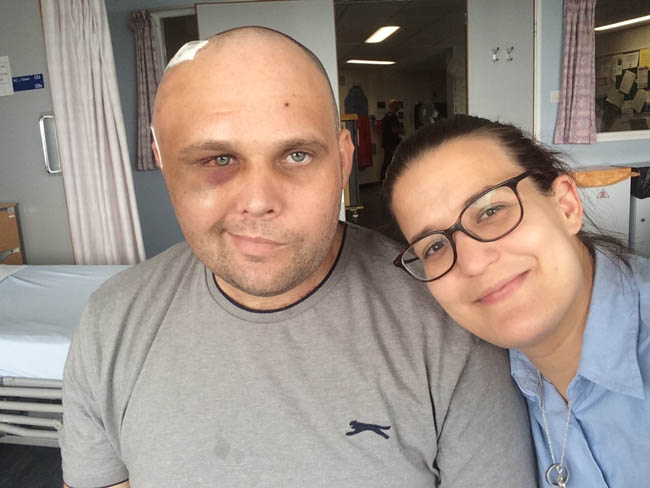 All of that changed in March 2020. A week before the UK went into Covid-19 lockdown, Neil received some really disappointing MRI results. Doctors thought the tumour seemed to be growing and they wanted him to start another round of chemo as soon as possible. The pandemic meant this treatment was postponed and another scan in May showed, sadly, that the tumour had spread to the back of his brain. He finally started another round of chemo treatment on 7 August 2020.

“One of the biggest hardships for Neil to endure is the fear of not being there for our daughter’s future. He can no longer work, or drive, and he could suffer a stroke at any time.”

We don’t know how long he has left, but we are using the time we do have as a family to ensure Isabelle has the best memories she can have with her daddy. The disease has ripped through our family and taken its toll in so many ways. Shortly after his surgery, Neil and I separated for 10 months, as the pressure just got too much. He moved to his mum’s and we spent some time apart before we began to rebuild our relationship, with the help of marriage guidance counselling. 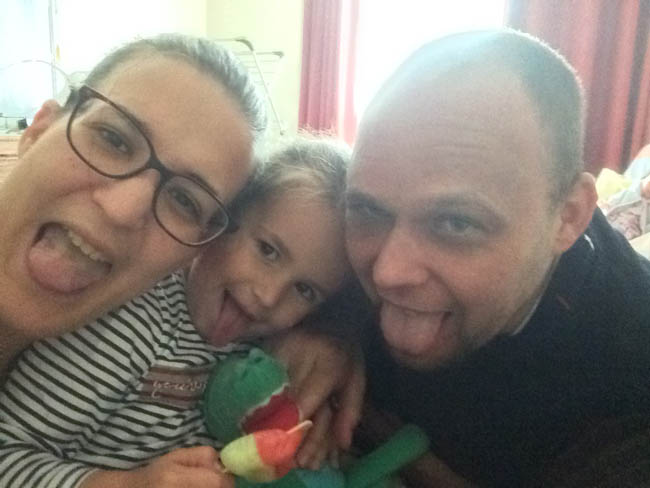 In September 2020 we got more devastating news, when we discovered that his chemotherapy hasn’t been working and so the hospital decided to withdraw the treatment. He has lost all peripheral vision and has problems balancing because of it. He also struggles to walk. When we received this latest bit of bad news, I knew I had to do something to help and so I signed up for Brain Tumour Research’s Walk of Hope. Starting on 14 September, I have walked as far as I can every single day, culminating in a longer walk on 26 September, the day of the charity’s nationwide, virtual Walk of Hope event.

“Neil wasn’t able to join me, as he wasn’t well enough, but he was my inspiration, as he continues to fight so hard.” 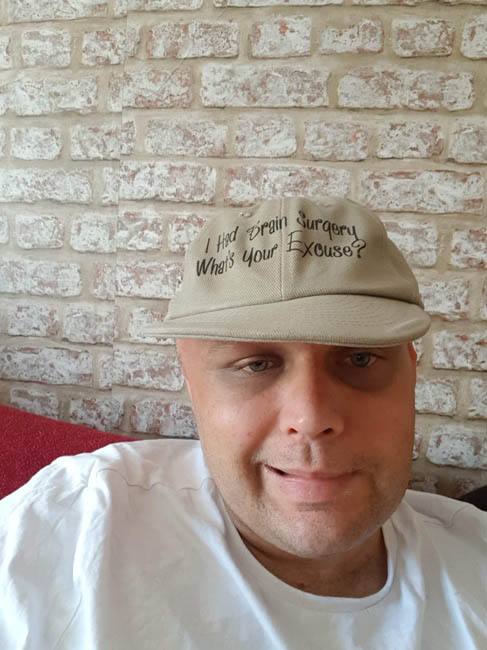 We have discovered a private clinic in Harley Street, London, which is willing to take Neil if his alanine aminotransferase (ALT) levels go down. In the meantime, I am still furloughed from my job working in a hotel and I am spending an increasing amount of time caring for Neil. I have to help him get dressed and to get in the bath. He is struggling mentally and doesn’t always want to talk about it. We are both only 36 and should be enjoying life with our beautiful daughter. We have tried to protect Isabelle from the whole truth of the situation but she is aware that her dad isn’t well and talks about the ‘monster’ in his head.  Before we were affected by this awful disease, I had no idea how many others were struggling with brain tumours. I have read many heart-breaking stories of other families facing the same devastating outcome. It is tragic but it makes me feel less alone. I am committed to continuing to fundraise and raise awareness to ensure fewer people in future have to go through this nightmare. 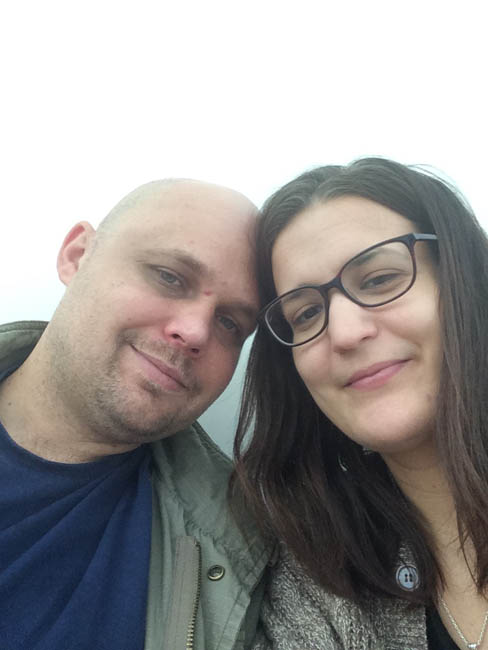