In April 2019, Mark Davies died aged 44, following a 13-year battle with a brain tumour. The oldest of six siblings, Mark, from Carmanthenshire in South Wales, was initially diagnosed with a grade 2 glioma. Eventually, the disease spread and he spent the final three years of his life in a nursing home.

My big brother Mark was a massive Neath, Ospreys, and Wales rugby supporter and held a season ticket for both Neath and the Ospreys. He also frequently watched Swansea City AFC, where he was a season ticket holder as well.

A heavy metal fan all his life, Mark loved Iron Maiden and travelled all over the UK and Europe either watching bands or as a roadie, which he really enjoyed.

In October 2005, at 30 years old, Mark suffered a knock to the head during a rugby match and had a seizure on the pitch. He was rushed to the Prince Philip Hospital in Llanelli and had a scan, as was routine following a trauma to the head. During that scan, they found a brain tumour.

“It was a complete shock as, up until that day, he hadn’t had any of the symptoms you’d associate with a brain tumour.”

The tumour was identified as a grade 2 glioma. He was treated with a course of radiotherapy and chemotherapy, which he dealt with really well. Mark was, however, left severely epileptic and it took many years to get the seizures under control. He couldn’t drive for 18 months and lived at home with our parents, Sheila and Dennis. In spite of the challenges, Mark was determined to get back to his job as a welder fabricator at Shufflebottom Steelworks, which he was able to do once his seizures were stabilised.

Mark continued to be monitored with MRI scans every three months, reducing to every six months after a couple of years. All the scans came back with positive results and he seemed to be managing really well until one day in March 2013 when he came home from work saying his eyesight was blurry. After seeking medical advice, it was decided he would have a biopsy at University Hospital of Wales in Cardiff. The impact of that procedure was massive. Mark lost all of his eyesight and suffered from serious psychosis. His behaviour became very aggressive. Worse still, the results confirmed it was a grade 2 glioma, incurable and unlikely to respond to further chemotherapy.

“My father was given the devasting news that the prognosis was extremely stark and he shared that information with me and my younger sister, Ffion.”

Determined not to give up, Mark went through another six rounds of chemo anyway, in the hope it would prevent further progression of the tumour. He managed OK for a couple of years but then, in October 2015, he slipped on a step coming down the stairs and broke his leg. The chemotherapy had made his bones very weak. He spent seven months in hospital before, eventually, going to Awel-y-mor care home in Gorseinon in May 2016. We were relieved that he had somewhere where he would be well looked after, as the hospital system wasn’t right for him, but it was sad that he was no longer well enough to be cared for at home. 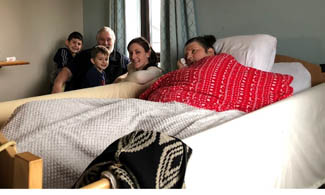 He went through good and bad patches during that time. Family visited every day; our parents, Ffion and me as well as our three brothers Owain, Sion and Ian and Mark’s nieces and nephews. By April 2019, after a long and slow decline, which saw him lose a lot of weight and the ability to speak, it was clear that we were losing him. Eventually, he couldn’t eat properly and had stopped taking his medication. He slipped away several times but kept pulling back. In the end, I held his hand and told him not to be scared and that he was going to a better place. A place where he could see again, where he could walk, swim and listen to Iron Maiden all day long.

“Seeing my brother, my brave and beautiful brother, take his last breath is not something that I have or ever will come to terms with.”

He died peacefully in the early hours on 23 April, surrounded by his loving family.

My family and I have been left utterly grief-stricken and none of us have dealt particularly well with our loss. It’s hit my parents hard. Ffion has had grief counselling; she is the one who spent the most time with him when he was nearing the end. 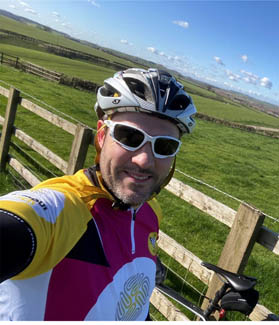 During the COVID-19 lockdown, I struggled with my own grief more and more. I was out for a run over Christmas, thinking about Mark, when I decided I needed something positive to focus on. Next month, I am going to take on a huge physical challenge, with the aim of raising at least £5,000 for two causes close to our hearts: My Name’5 Doddie Foundation and Brain Tumour Research. So, on 28 May 2021, I’ll be setting off from Great Yarmouth in Norfolk on a 450-mile bike-packing journey, that will take me from Coast to Coast, arriving in Aberystwyth in Ceredigion by day three. I’ll then set off along the West Wales coast, arriving at Mumbles Pier in Swansea by the end of day five. I’ll spend all day riding and each evening I’ll visit rugby clubs along the route, delivering training sessions for minis, juniors, colts and seniors.

“I wanted to come up with an epic challenge; something big enough to devote myself to and to inspire as many people to donate and get behind it as possible.” 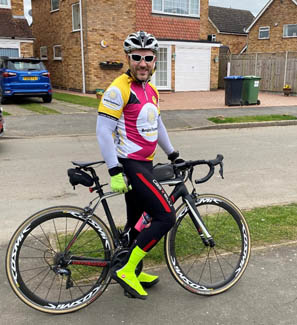 Through Mark’s diagnosis and all he went through, I became aware of the dire lack of funding into this area of cancer research. I am head of PE and sport at Leicester Grammar School and an additional motivation to my fundraising is that one of my students, Tom Ellis, passed away from a brain tumour a year ago, at the age of just 15. Tom was in my rugby team and I taught him PE. He was bright, cheerful, amazingly tenacious and incredibly well loved. His diagnosis came completely out-of-the-blue and followed a CT scan investigating a suspected concussion after a rugby match in November 2018. He completed five surgeries in total – four on his brain and one on a secondary tumour in his spine. he endured seven rounds of chemotherapy and three debilitating sets of radiotherapy, the only thing that had any effect on his tumour. Tom's focus throughout all of this was his education; attending school as often as he could and being “normal” with his friends. Unfortunately, the tumour was too aggressive and he finally lost his fight in June 2020 at Rainbows Hospice.

Tom’s birthday was 28 May, so I will most definitely be thinking of him as I set off on my challenge; his untimely death is another stark reminder of how indiscriminate this disease is. Brain tumours kill more children and adults under the age of 40 than any other cancer yet, historically, just 1% of the national spend on cancer research has been allocated to this devastating disease. I want to help prevent other families from going through the heartbreak my family and Tom’s family have suffered. 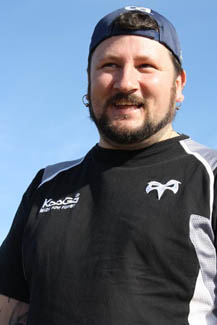