We are grateful to Lily's mother Diane, who worked with us in January 2020 to share Lily's story here. Sadly, she passed away on February 15th 2020. We remember Lily as we continue our work to raise awareness of this devastating disease and to fund research to help find a cure. She will be forever in our hearts.

Lily, from Eastwood near Southend in Essex, was just 13 when she was diagnosed with diffuse intrinsic pontine glioma (DIPG). Her family, which includes her parents Diane and Martin and her younger brother Josh, were told that the tumour was inoperable and the only treatment available was radiotherapy to give her a few extra months until the tumour began to grow again. They were told to go home and make memories. The Wythes have since found a promising clinical trial in the United States and are hoping to raise the hundreds of thousands needed to secure what could be life-saving treatment.

Here is Lily’s story as told by her mother, Diane…

Lily has always been a very happy-go-lucky kind of girl. She is very organised, always doing lots of planning, she loves cooking, going shopping, especially for the latest fashions and is very positive, just like we all are in our family.

At school, Lily enjoys all subjects and is always trying to make more pocket money, which includes making bracelets. She also has a skin care range and wants to extend this to natural body and face scrubs. She will give half the money she makes to her treatment fund and keep the other half for herself. 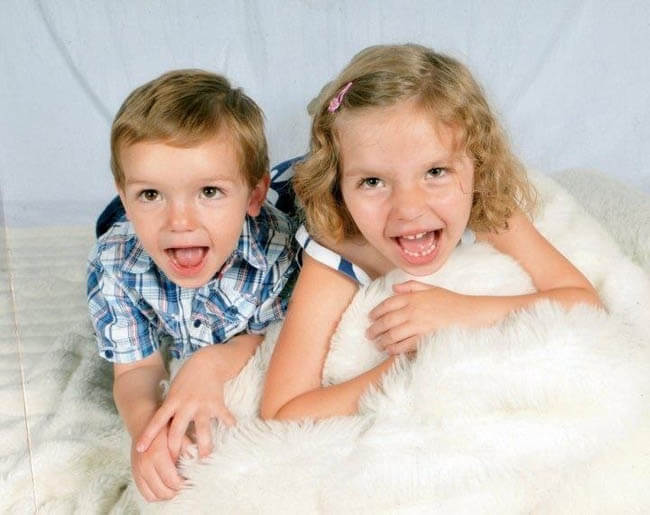 Lily had always been a healthy child – she has never suffered with allergies or anything more than croup as a baby – but we arrived back from our holiday in August 2019 and Lily complained of a headache.

“Over the month we saw five different health professionals, who either put Lily’s symptoms, which by now included vomiting, down to a hormonal migraine or to an ear infection, prescribing paracetamol.”

Finally, in September, we saw the GP again because Lily was by then slurring a bit, complaining of double vision and losing her balance. He referred Lily to a paediatrician. The same day, however, she also had an appointment with an optician who told us Lily had an eye prism and needed an MRI scan. He said Lily might have damaged the nerves at the back of her eye, but there was no need for an urgent scan. It could wait until we saw the paediatrician.

We went home pleased that we were getting somewhere, never thinking for a moment that it could be anything serious.

However, on Sunday Lily deteriorated. We were at the beach at Thorpe Bay with friends and were aware that she was acting peculiarly. She was very tearful and emotional, as well as seemed to be very sluggish on her left side when in the water. She came out and I thought she must be very tired.

Not long after this, a friend noticed her water bottle seemed to drop out of her left hand into her bag. Lily was also slurring more and seemed very off balance. She couldn’t even sit up straight in a chair. We took Lily to A&E Southend Unversity Hospital but they sent us home, telling us it was all because of Lily’s migraine and to make a note of all the foods she was eating. We became more determined than ever that Lily needed an MRI scan.

I spent Monday morning trying to get hold of the MRI department at the hospital. I also tried to secure a private MRI scan. In the end I succeeded in getting an appointment at Southend University Hospital. Lily was scanned and then a doctor arrived to put contrast dye into her arm ahead of her brain being scanned again, as well as her spine this time.

Lily was referred to paediatrics and it was then on 19 September we were told she had a tumour on her brain stem. Doctors were unsure at first whether it was a glioblastoma multiforme or diffuse intrinsic pontine glioma (DIPG) because the tumour covered her pons (situated within the brainstem) and had started to spread. Lily was transferred to Great Ormond Street Hospital (GOSH) where the tumour was confirmed on 8 October as a DIPG after doctors were successful in taking a biopsy.

“It was horrendous and so scary. I had never heard of DIPG and didn’t have a clue how deadly serious it was until I did some research.” 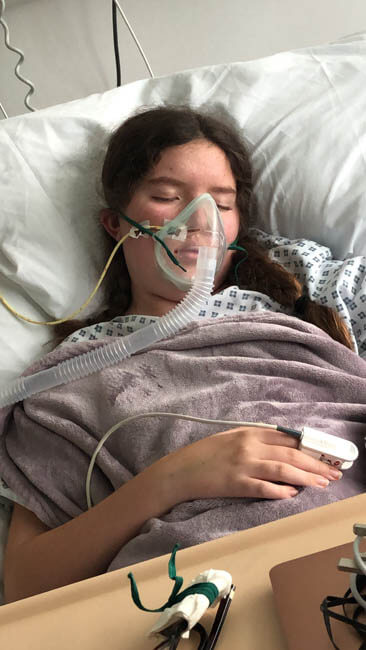 We were told that the only treatment which could be offered was radiotherapy which would take place at University College Hospital in London (UCLH), but after that there would be nothing more because there were no other treatments for DIPG. We were warned that there was a 0% survival rate and that most patients only live a year.

I have since discovered that only 10% of children with DIPG survive for two years and only 1% make it past five years, but as the disease is more common among children between the ages of five and nine, we hope that with Lily being older, her survival odds will be better.

Lily underwent just two and a half of the recommended six weeks of radiotherapy because we decided that, whatever length of time she had, nothing was going to change the outcome. Happily, she is showing more and more signs of improvement, although we have been warned her tumour is likely to return in the next six months or so and spread more aggressively than before.

The whole of the left side of her body has been affected by the tumour, her legs more than her hands. Lily had to learn to swallow again, then progress from pureed food to eating normally. She also had to learn to walk again, moving round the house holding onto things. By the end of December 2019, she was able to walk downstairs on her own. At the moment it is the limitations to her mobility which is distressing Lily more than the tumour itself.

We are hoping Lily will be able to return to school in February – she’s at The Eastwood Academy in Southend, but having to rely on a wheelchair will mean there are many parts of the school she won’t be able to access.

“In the meantime, we are not prepared to do what the doctors say and just wait for the disease to progress. We were never told about the possibility of clinical trials or other treatments which could make Lily feel better.” 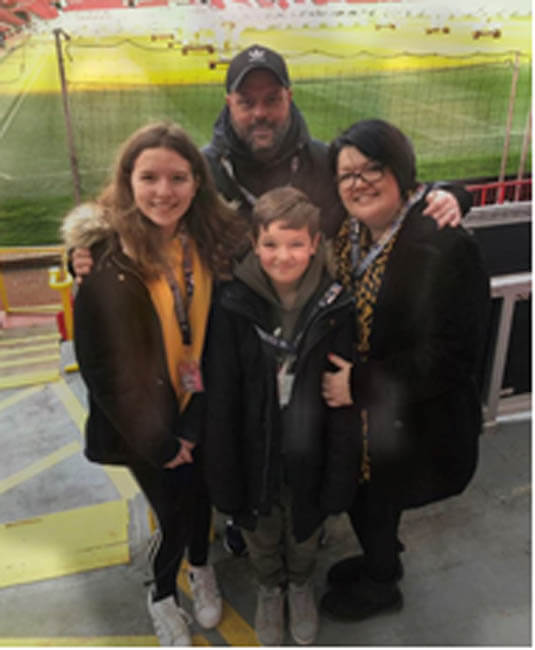 After exhaustive research we have found a promising experimental clinical trial in Seattle in the US and are hoping Lily will get a place when the next phase of trials begins there in March 2020.

We obviously don’t have time on our side and, of course, Lily has to be well enough to travel to the States and go on the trial. Added to this, we know that we are looking to raise at least £300,000 for the 12-week treatment. We have set up a crowdfunding page and have been amazed at how family and friends and even people we don’t know have been touched by Lily’s story and have donated, already raising more than £70,000. The response has been incredible. Lily’s 14-year-old cousin James Cowdrey raised a massive £12,000 on his own from a sponsored swim and our great friends Michael and Paula Burton who live in Southchurch raised a further £7,000 holding a Halloween fundraiser.

We were told at the hospital to go home and make memories, but we aren’t prepared to just sit around and let nature take its course. We have made changes to Lily’s diet because we know that cancer is fuelled by glucose and fats and are looking into natural herbs and spices which might be beneficial, as well as oxygen therapy and vitamin C treatment. 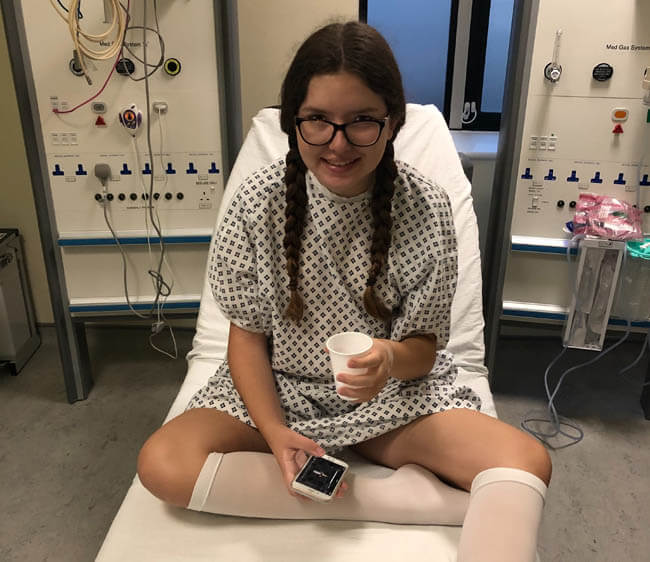 I believe that by not focusing on just one thing to tackle cancer, we could turn the impossible into the possible.

Despite Lily’s grim prognosis, she remains optimistic that she will get her place on a clinical trial and it will lead to a cure. She’s adamant the tumour is not coming back, but obviously we know it will.

“Nothing prepares you for any of this. We now face the realisation that our care-free life is over and are caught up in hospital appointments, alternative therapies and fundraising to get Lily on a clinical trial and give her the chance of survival.”

Life can change in an instant with no warning or reason, but the only way to continue is by being positive and proactive.

If you have been inspired by Lily’s story and would like to know more about our lobbying, research updates and fundraising opportunities, please sign up to our weekly e-news. 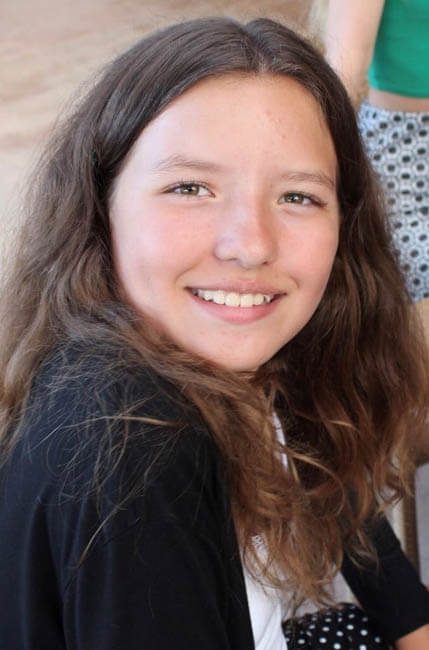