Retired maths teacher and former parish councillor Judith Todd was diagnosed with a glioblastoma multiforme (GBM) in 2016 after complaining of persistent headaches, initially attributed to pain emanating from a skiing injury to her knee the year before. The mother-of-three, who lived in Norwich, Norfolk, underwent three operations, as well as chemotherapy and radiotherapy treatment, but suffered a stroke during her last surgery which left her paralysed down her left-hand side. Sadly, COVID-19 restrictions meant she was forced to spend her initial three-month recovery alone but she was reunited with her childhood sweetheart and husband of 39 years for seven months before passing away at home three days before Christmas in 2020.

Here is Judith’s story, as told by her husband David …

Judith and I met at about the age of 13/14 when we formed a mixed-doubles badminton partnership in school. I was in the year above but she followed me to Nottingham University and, when I got employment in Norwich, Norfolk, after graduating, she chose to complete her Postgraduate Certificate in Education (PGCE) there too. I guess you could say that ours was a school romance that stood the test of time. We were actually about to take a month-long trip to Australia to celebrate our pearl wedding anniversary when we found out about Judith’s brain tumour.

“We never were able to take that holiday together but we travelled as much as we could within Europe in the four years that followed.” 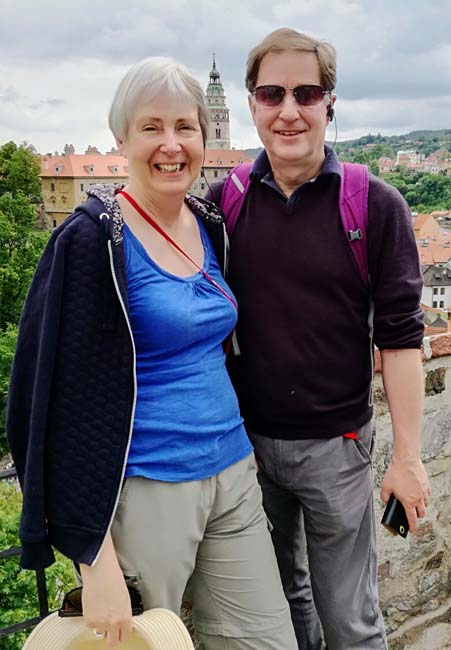 She fell ill towards the beginning of 2016 when she started complaining of persistent headaches. They weren’t debilitating, more irritating, but it meant that she was regularly taking paracetamol so she went to see her GP. The doctor attributed it to pain from a skiing accident the year before in which Judith had hurt her knee and didn’t really explore it any further. It was around that time that I noticed she wasn’t really herself. Some things are clearer with the benefit of hindsight but even at the time there was a feeling that she wasn’t quite right. We went on holiday to Scotland with family and I noticed that she was walking quite slowly. We’d walk a mile or two to the local village and Judith would trail behind everybody else and I don’t think she was even aware of it. When we got home, as it wasn’t long before our planned holiday to Australia, Judith decided to return to the doctors and was referred for an MRI.

The day after having her scan, Judith, a maths teacher at Norwich High School for Girls, went on a school trip to the Brecon Beacons. I got a phone call from her GP two days later saying I really needed to try and get hold of her. I explained where she was and the doctor said she was worried about her being up in the mountains and told me it might be better for her to come home. She couldn’t tell me what it was all about, so, of course I was scared. I said we were due to go to Australia in a few weeks and she told me we wouldn’t be going.

“I tried calling Judith but she was out of mobile phone range supervising a Duke of Edinburgh expedition so I just got in the car and drove five hours to South Wales.” 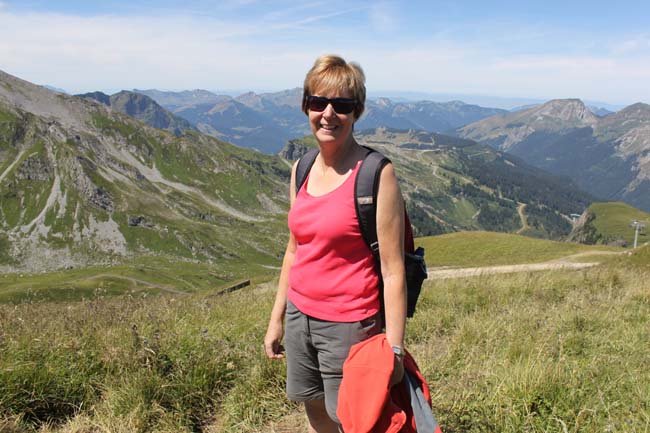 I managed to get in touch with her about half way into my journey and had her home by about 2am the following day. It was a weekend so, despite both being terrified, we had to wait two days to see the doctor, at which time she told us what the MRI scan had revealed, a significant and, almost certainly high-grade, brain tumour. It was four days later that we went to see a neurologist at the Norfolk and Norwich University Hospital. On reviewing her notes, he said he was reluctant to let her go home but after conducting a number of tests and not seeing any signs of neurological deficiencies, he let us go on the condition we would phone 999 if there were any changes. 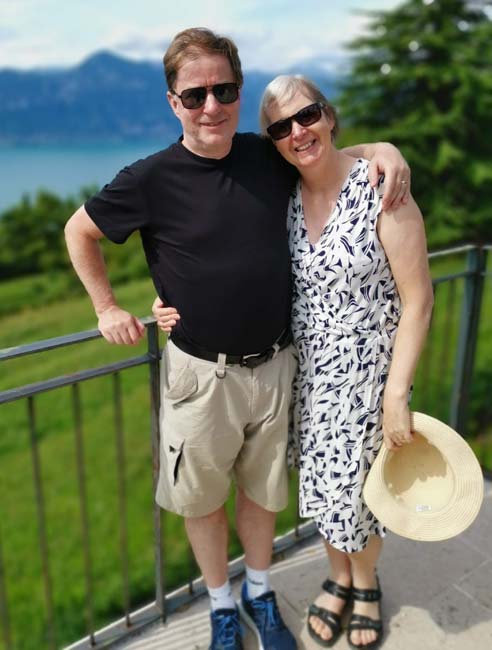 It was about a month later, in May 2016, that Judith was admitted to Addenbrooke’s Hospital in Cambridge for what would transpire to be the first of three eight-hour operations to debulk the tumour – a glioblastoma multiforme (GBM) in her right temporal lobe – from her brain, above her right ear. Only our immediate family knew what was going on. Judith’s parents were elderly and she didn’t want to worry them at that stage so we used the Australia trip we had planned as a cover for her operation and recovery. When she was back home and feeling better she told her parents and they were shocked but I think because she looked well, they were less alarmed than they might have been had they seen her immediately after the operation, with a bad scar and significant bruising. Intensive radiotherapy and chemotherapy treatment followed but just two days after the end of the first phase of chemotherapy Judith was on holiday in Norway, climbing mountains and rowing on fjords; it was a perfect testament to her resilience and optimism. 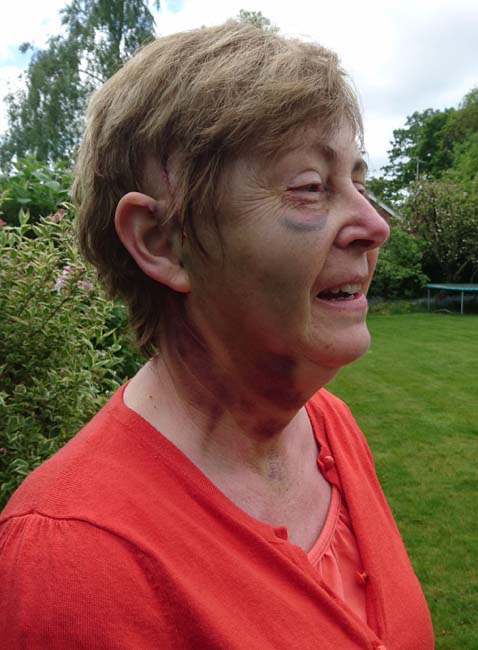 Having received a positive outcome in February 2017, Judith’s progress was monitored by three-monthly scans and visits to her consultant. It wasn’t until the beginning of 2019 that we learned of further development of her tumour, on the same side. As she’d done so well after the first operation, they were more than happy to refer her to Addenbrooke’s for the same procedure. Again, she had a positive outcome and was home within 48 hours. That was followed by oral chemotherapy and regular monitoring and it wasn’t until the beginning of 2020 that a scan revealed further progression.

“Her consultant thought the best prospect for a positive outcome was another operation but, unfortunately, she had a stroke on the operating table on Valentine’s Day and never really fully recovered from it.”

She was left paralysed down her left-hand side, unable to walk and partially-sighted, and, sadly, it was at a time when COVID-19 restrictions meant I wasn’t really able to see her, which was incredibly distressing. She spent about three months between Addenbrooke’s, the Norwich and Norfolk stroke unit and a community hospital where she went for physical rehabilitation, so we went a long time without seeing each other. It really felt like everything was against us. The only small blessing is that I’m not sure she fully understood what was happening, but I did find out later that she got quite despondent in hospital.

“She’d previously been really positive but lost a lot of her motivation and was even prescribed anti-depressants which isn’t something she would have wanted.” 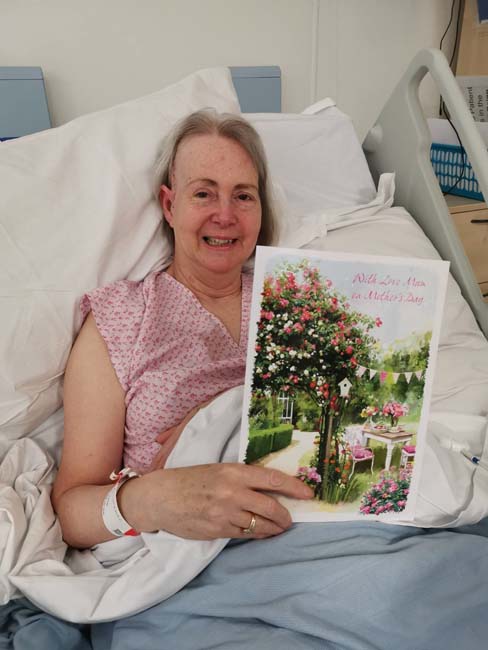 We eventually got her home in May 2020. We assembled a bedroom in the dining room and it was in her hospital bed there that she spent much of her time. She got home-cooked food, saw familiar people and was almost back to her old self. She certainly didn’t need anti-depressants and I think was virtually off all medication within a week of coming home. We got a hoist so we could get her into a wheelchair to move her about a little bit but her stroke meant that she couldn’t really do much. It was a huge comfort to have her home, infinitely better than her being in hospital and she continued to get quite a lot of physiotherapy and rehabilitation from occupational health nurses and had carers who visited her four times daily to assist with aspects of personal hygiene.

“She had fantastic treatment at home and was very well looked after and, within COVID rules, her friends and family could see her, which was immeasurably better than the nightmarish regime she’d had previously.” 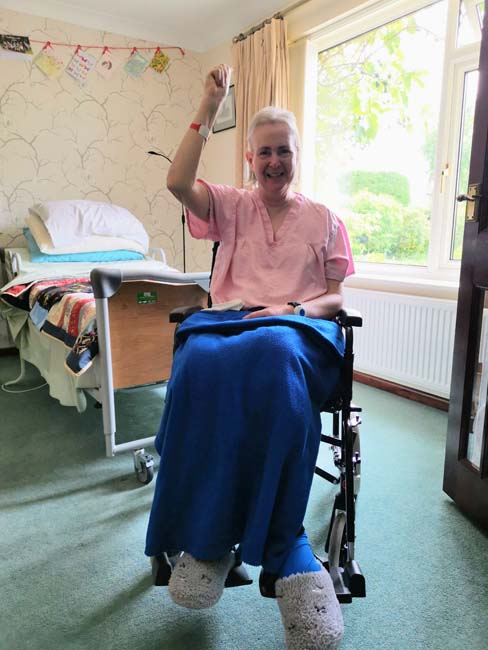 At that point she was given a prognosis of about six months, which turned out to be about right, with her passing away on 22 December 2020 at the age of 61. In her last month she started having periods of sickness, which was really quite difficult. She’d have two or three days where she couldn’t really keep any food down and that would settle down and we’d gradually build up her food intake but then she’d get sick again. In the last week or so she did deteriorate quite a lot and became less communicative. We couldn’t really get her to eat and in the last few days she couldn’t swallow. Whenever we tried to give her liquid, she’d gag or just hold it in her mouth; I think she just lost the brain function to be able to do it.

“Speaking to the palliative care nurses after, it struck me, unsurprisingly, that they had seen that before and knew it wasn’t going to be long.” 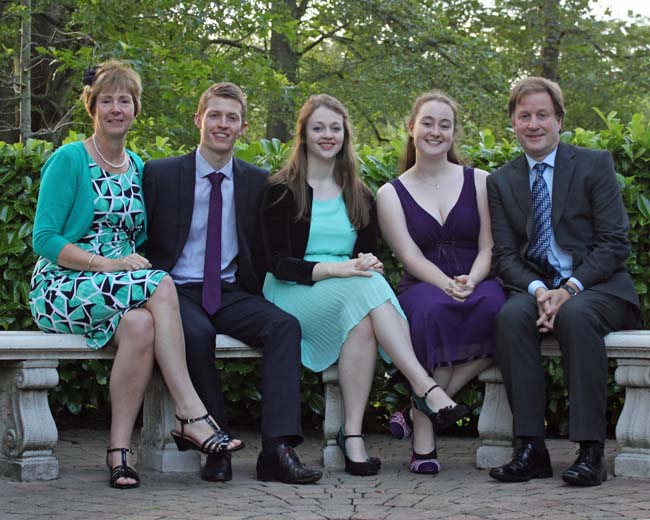 It was a year ago, on 9 December 2020, that Judith and I, joined by our three children, Rebecca, Andrew and Hannah, and Judith’s sister, Carol, had a Christmas dinner together. Judith was there in her bed at the end of the table. I’m not sure she really knew what was going on and she certainly didn’t have anything to eat but I’m glad we did that and I think it made our actual Christmas dinner a little bit easier. It was a bit opportunistic because the children all happened to be with us on that day but I think deep down I knew Judith wasn’t going to make it to Christmas and was probably just in denial about it at the time. People deal with grief in different ways but we’re determined to live life as best we can because it’s what she would have wanted.

“She always took life as it came and made the most of it.”

I’ve been spreading her ashes around some of her favourite places in Norfolk and her sister took some to the caravan site she used to play at as a child. I also planted a Himalayan cherry tree in our garden earlier this year in her memory. We used to walk around the gardens at Anglesey Abbey and one of the features there is a winter garden which has plants that are at their best in winter when most things are dull and apparently lifeless; one of those is the Himalayan cherry tree which has a coppery-red bark and gives a distinctive show of colour in winter. 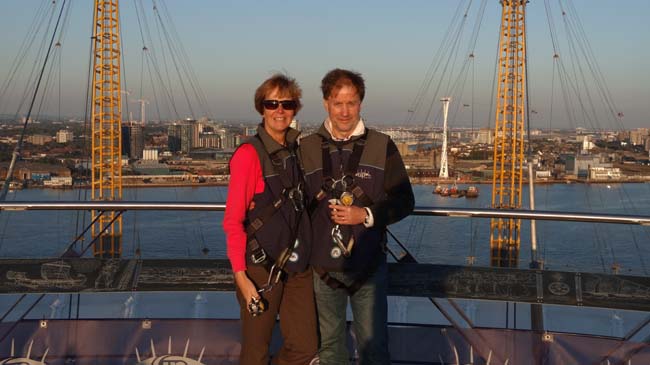 “I made a donation to Brain Tumour Research following Judith’s death, using money paid out from the remainder of her pension and contributions made at her funeral.”

I was attracted to the research element of the charity because of Judith’s scientific background and I think knowing it’s not one of the bigger cancer charities appealed because I know how underfunded brain tumour research is. It also helps that just up the road from me is a children’s hospice and from receiving its newsletters I know that, sadly, too many children there have brain tumours, which not enough people are aware of so I’m doing what I can to raise awareness. It’s shocking that brain tumours kill more children and adults under the age of 40 than any other cancer. 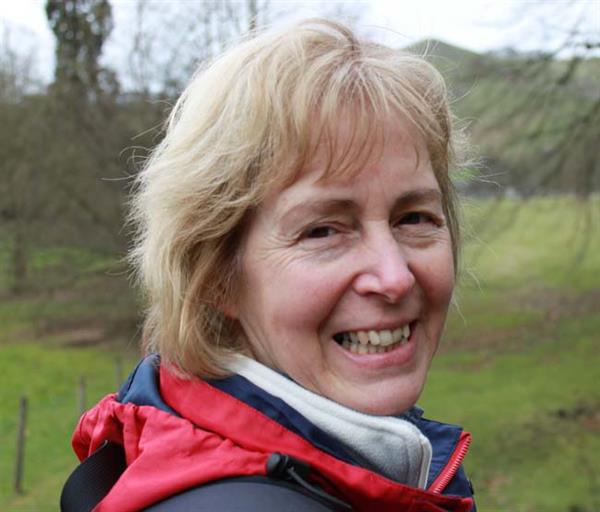