Qualified pharmacist, part-time teacher, wife and mum to two teenagers, Judith Slinn was diagnosed with a low-grade brain tumour after experiencing problems with her speech. She had radiotherapy and later underwent surgery and chemo when the tumour recurred. Judith spent her last weeks in a hospice with her family at her bedside and passed away in May 2016 at the age of 54.

“Mum went for an MRI which revealed she had a ‘growth’ on her brain. I can remember exactly how and when I was told. Dad took me for a walk outside the hospital and broke the news but the reality didn’t sink in until later. I wasn’t even thinking about cancer, it was just too much and too awful to comprehend. Somehow, Dad managed to remain calm. Even then we didn’t think things were really bad but that it would be dealt with and everything would be OK. We didn’t think it was serious and certainly never thought she would die from it.”

I was 15 when my mum was diagnosed with a brain tumour. Dad took me aside to break the news but it didn’t really sink in until later. Mum was the head honcho of our household, looking after me, my sister Beth, and our dad. She organised everything and made sure we always had what we needed and were where we were supposed to be.

I was studying for my GCSEs and Beth was off to university and I am sure Mum kept a lot to herself in order to ensure we would be able to focus on our studies. She didn’t want to mess things up for us, typical Mum!

Five years later, as Mum spent her final weeks in a hospice, the tables had turned and it was our turn to look after her. I had been really angry with her following the diagnosis and during treatment but, at the end, we gained a new sense of closeness and I held my mum, my tears falling onto her face, as she took her last breath. Mum had always hated hearses so Dad arranged for her to be taken to the funeral at St Mary the Virgin in Great Brington, our home village in Northamptonshire, on a carriage drawn by two white horses. I played the guitar during the service, choosing MLK by U2, one of Mum’s favourites and, as she taken from the church, the White Horses TV theme, which she always loved, was played. It was very atmospheric as the sun shone through the windows onto the coffin and I reached out my hand to touch it when I had finished. I’m so pleased I was able to play, it just something I wanted to do.

Mum’s diagnosis came out of the blue. She was at the peak of her fitness, always had a very healthy, and mostly organic, diet. She was slim, she rarely drank and didn’t smoke. A qualified pharmacist, Mum was working part-time at St Andrew’s Hospital, Northampton, and as a teacher at Staverton Primary School near Daventry when she was first taken ill.

It was the summer of 2011 when, seemingly out of nowhere, Mum developed problems with her speech and couldn’t find her words. She went to her GP who suspected a transient ischemic attack (TIA). She was told straight away that she mustn’t drive and was sent to Northampton General Hospital. Mum was there for several days and had lots of tests.

Mum went for an MRI which revealed she had a ‘growth’ on her brain. I can remember exactly how and when I was told. Dad took me for a walk outside the hospital and broke the news but the reality didn’t sink in until later. I wasn’t even thinking about cancer, it was just too much and too awful to comprehend.

Somehow, Dad managed to remain calm. Even then we didn’t think things were really bad, that it would be dealt with and everything would be OK. We didn’t think it was serious and certainly never thought she would die from it.

Mum was referred to the John Radcliffe Hospital in Oxford for a biopsy which revealed the growth was a grade two astrocytoma brain tumour in the right temporal lobe. She had radiotherapy back in Northampton during October and November and, although it was difficult, somehow Mum managed to carry on.

Mum kept a lot to herself and now, as I look back, I am sure it was because she didn’t want it to adversely affect what was happening at school and university. She was trying to protect us.

We were reassured that the doctors didn’t seem too worried and Dad said people could live into their nineties with brain tumours. A post-treatment scan showed the tumour was stable and that’s how it remained as she had regular scans, three-monthly at first and then every six months.

I felt extremely angry with Mum the whole time this was going on and I vented my frustration on her. Now I am annoyed at myself for the horrible things I said, including asking her why she was going to die.

Time passed and in March 2015 a scan showed the tumour had progressed and it was reclassified as a grade three/four oligoastrocytoma. She needed chemotherapy and surgery. The operation was successful in removing 90% of the tumour. She looked so dreadful when I visited her in recovery that I burst into tears but, fortunately as soon as the following day, she was much better and sitting up in bed. A couple of weeks later she travelled with us to Chesterfield to celebrate her mum’s 80th birthday and was showing off her scar to anyone who cared to look!

I was at university when she went through chemo. We had a great Christmas together and, as usual, Mum cooked a wonderful meal although, despite the fact she was putting on a brave face, you could see she was getting tired. Looking back, I can see that Mum was doing her utmost to ensure our lives would be as normal as possible and I will always be grateful for that.

Mum and I would text each other and sometimes her messages just didn’t make sense. And, when I phoned her to wish her happy birthday, she sounded weird and as if she was in a daze. Dad called me soon after to tell me that Mum was deteriorating rapidly, she was struggling to walk and communicate. I went home and it was a massive shock for me to see how poorly she had become.

On 11th March, five days after her 54th birthday, I travelled with Mum as she was taken to Cynthia Spencer Hospice in Northampton. Although her motor skills had gone, Mum was still cognitively aware and knew exactly what was happening. It was awful. Medication helped her a bit and she became more settled. The hospice staff were amazing and not just to Mum, but to us all.

During the first of her two months at the hospice, I was at uni Monday to Thursday and would then spend the long weekend with her. When that became too much, I stayed at home all week. Mum always had a kind of silent strength, she was small and quiet, a determined and proud northerner. Even at the end, when it was so difficult for her to express herself in speech and as the cancer worked its way through her brain, she was still putting others before herself. I remember how she would say ‘what’s up’ as I sat by her bedside preferring to ask me about my troubles rather than it all be about her.

That time was the longest two months of my life. Every time I arrived at the hospice to visit, Mum would be listening to U2’s New Year’s Day with the moving lyrics ‘I will be with you again.’ She hated what was happening and just wanted to come home. Sadly, she was too ill for that but the hospice did arrange for her to have a home visit. We cooked a meal which I fed to her and she was able to spend time with our golden retriever, J.

Mum was in a coma for her last five days and I hated how she was trapped. I just wanted it to be over. We were face to face as she took her last breath and her death was as peaceful as it could be. Being there at the end was important to me. I wanted to do all I could for her, to say sorry for being angry with her and to resolve past trauma.

I graduated in June 2017 with a first in physiology and, as Beth had gained a first in languages, it meant Mum’s biggest fear that her diagnosis would affect our studies, wasn’t realised. I took a year out and worked in a pub for a while – the kind of thing my Mum had done and how she met Dad – and I also travelled a bit on my own to New York and Berlin which was a big thing for me.

Counselling helped me a lot and allowed me to look at negative things in a positive way. When I saw a job advertised to work on the PR team at the Brain Tumour Research charity, I knew that was what I wanted to do. First time round I was unsuccessful but, the day after I returned from New York and out of the blue, I was made an offer and started within days.

I feel as if it’s my perfect job. I talk to patients and families who have been affected by this dreadful disease and, when I feel it’s appropriate, I tell them about my Mum. It feels really good to talk about her and to feel as if I am helping others as we work towards finding a cure for brain tumours. It is turning a massive negative into a positive. Dad, a former business journalist who spent many years in Northamptonshire Police, is very proud of me.

Music has always been very important to me and, on 22nd July, I will be remembering Mum as I take part in an attempt to create a new world record for the largest electric guitar ensemble. The event takes place at the Ealing Blues Festival and we hope there will be 450 guitarists playing ‘Heroes’ by David Bowie.

So much has happened in the two years since Mum died. I am very fortunate to be in a job I love and one which makes me glad to get up in the morning. I want to ensure my Mum didn’t die in vain and I think and hope she would be proud of me. 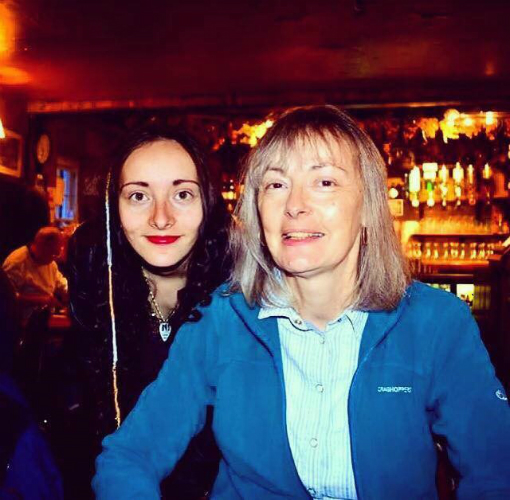