We are grateful to Jay, and his mother Sharon, who worked with us in March 2017 to share his story here. Sadly, he passed away in March 2022 We remember Jay as we continue our work to raise awareness of this devastating disease and to fund research to help find a cure. He will be forever in our hearts.

In October 2011, aged 25, Jay was diagnosed with a grade 4 glioblastoma multiforme brain tumour (GBM4). He was given a prognosis of six months. More than six years on, while still on three-monthly scans, Jay is a devoted husband to Becky and dedicated father to Teddy, born in January 2017. He has a job he enjoys, working part-time as a graphic designer.

“Two weeks later we were given the histology results. Jay had a grade 4 glioblastoma multiforme. We went home in an agonising whirl to do our own research. It was not good reading. I quickly realised that the best way to cope was to look for the positives. I voraciously read the stories of patients who had good outcomes and ignored the negative ones. Regrettably, these were far and few between.”

Here is Jay’s story as told by his mother, Sharon…

Jay was a senior mechanic, doing the job he had always wanted to do. I can clearly remember his first word was “car” and from a very young age he couldn’t wait to learn to drive. It was all he ever wanted to do – be associated with motorsports.

Jay was doing really well and on a really good salary, working with top of the range, super sports cars. The only downside was that he and his girlfriend had split up, although looking back it was probably because he underwent various personality changes brought about by his condition.

He had become aware that he was starting to struggle with reading numbers or words, but had learnt coping techniques like asking people to read things to him. He also started to have little epileptic fits and had to pull over one time when he was driving.

Jay went to see the GP. As he was never ill, and then suddenly visited the doctor twice in six months, it should have signalled to the GP that something was wrong. However, Jay was told that he was depressed and recommended to go for counselling.

It was very worrying – Jay was becoming quite reclusive and shutting himself away in his bedroom. I couldn’t seem to get him to talk even though I kept on trying.

I have a number of rented properties and one day, Jay was at one of my houses with my daughter Jo. He was painting in a different room and suddenly my daughter received a one word text which just read “Jo” from him. Being a coronary care nurse, her sixth sense kicked in and she knew something was wrong. She rushed to him and instantly thought he was having a mini-stroke (or TIA) so took him straight to hospital. The first I knew about it was when she rang me from the hospital to say something was wrong.

Very perceptively, Jo had realised that the consultant had seen something which gave him concerns, so she put up a fight when medical staff tried to discharge Jay. She insisted he should stay and have more tests and not come home to wait six weeks for a scan.

Her insistence paid off and Jay was booked to have a CT scan on the Monday. He was sent home for the weekend.

The scan revealed a small mass on the brain. It was the last thing I expected – maybe I was being very naïve. We were given the devastating news that he would need an operation and that they would keep him in hospital and transfer him to the neurological unit at the Royal Preston Hospital. He had an MRI scan, followed the very next day by brain surgery. A registrar told us to prepare for the worst – Jay had a serious brain tumour.

The craniotomy was successful in removing around 60% of the tumour. Two weeks later we were given the histology results. Jay had a GBM4. We went home in an agonising whirl to do our own research. It was not good reading. I quickly realised that the best way to cope was to look for the positives. I voraciously read the stories of patients who had good outcomes and ignored the negative ones. Regrettably, these were far and few between.

On the other hand, Jay didn’t seem to appreciate how bad he was. He didn’t appear to be aware what a terminal prognosis meant – they told us it could be as little as six months.

Jay was put on steroids and started a course of radiotherapy and chemotherapy treatment.

He gained five stone while on the steroids – they made him very hungry. In hindsight I would have tried to control his diet. He was on a lot of different medications, but after a few months he decided to stop taking the steroids and also the chemotherapy.

Jay did eventually go back to chemotherapy, but after 10 cycles he was forced to stop because his body could no longer tolerate the treatment. He was so tired and stayed in bed for days, if not weeks. He also had to stop driving due to the brain surgery and the seizures he was having, which was incredibly hard on him as driving had been such a big part of his life. It really restricted his independence.

The sad thing was that there just weren’t any support groups around for people Jay’s age – they were all either for children or for old people. Jay decided to set up a charity to support adults between the ages of 18 and 40 and encourage them to have an active social community. At the same time, it gave Jay something to focus on. The charity, which he named “Inbetweenears” became Jay’s life – he embraced it with 100% of his energy and passion. As it was aimed at young people, Jay wanted to be more in touch with social media and so he started a Facebook page and Twitter site.

Since setting up the charity, Jay has met and married a lovely lady called Becky and 13 months ago, they had a baby son, who they named Teddy. When he first met Becky, Jay was very reluctant to start a relationship, but Jo and I both encouraged him, as long as he was honest with Becky about his condition.

Jay still goes for MRI scans every three months which throws us straight back to the dark place we were in when he was first diagnosed. He suffers regular seizures as the cavity left following his surgery fills up with fluid. He has had a reservoir fitted and this has to be drained every so often. We know when the time for this has arrived because it triggers a bigger seizure.

My worries about what might happen in the future never go away but I try to stay positive.

Jay couldn’t go back to the job he adored because he can’t drive, but happily the skills he developed when setting up Inbetweenears led to him being offered a job in graphic design. He works three days a week for a company in Clitheroe, which is perfect for him as he gets tired very easily.

The Royal Preston call Jay their “little miracle”. He was given six months, but he is still very much alive more than six years on. His oncologist and surgeon have both retired and I worry that there may not be the same talent coming up behind them or whether they will have the same depth of experience and passion.

I would like to see GPs becoming much more aware of the early signs of brain tumours and not, like in Jay’s case, dismiss his health concerns as depression. Early diagnosis gives patients a little more of a fighting chance.

I wish the government would put more funding into research. Brain tumours are killing too many people, particularly those under the age of 40 where it kills more than any other cancer. For this reason, Inbetweenears is funding a researcher at UCLAN within Preston University. These research centres shouldn’t have to be so reliant on charities.

If you have been inspired by Jay’s story you may like to make a donation via www.inbetweenears.co.uk/donate or leave a gift in your will via www.braintumourresearch.org/legacy 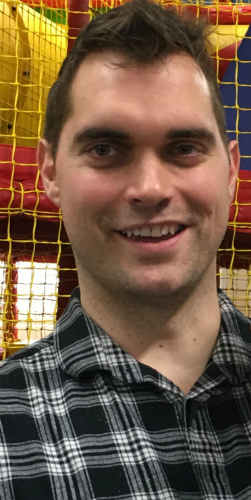