Jacob Henry Sloan Goodall was just four months old when he died from an atypical teratoid rhabdoid tumour (ATRT) in November 2016. Concerns were first raised when Jacob had acid reflux problems, and, after several trips to the GP, Jacob had a scan at hospital which revealed the tumour. Jacob’s mum, Kate, is taking on the 10,000 Steps a Day in February challenge to raise money for Brain Tumour Research.

When I was pregnant, there was no indication that anything was wrong, although Jacob did arrive very late, at 16 days overdue. I had been through all the steps of induction, which hadn’t worked, and then it emerged that he was breech. Jacob was born by emergency caesarean section.

Jacob was born on 25 July 2016. For the first few weeks, Jacob had issues with acid reflux so my husband, Andy, and I took him to our GP who then sent us to Queen Alexandra Hospital in Portsmouth. 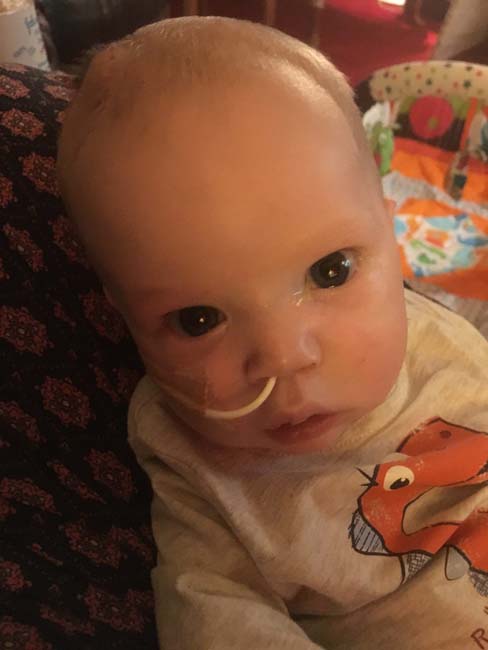 “A consultant noticed Jacob had slight facial paralysis. When he cried, one of his eyes didn’t fully close as you would expect.”

Because of this, there were concerns that Jacob had Moebius syndrome, but this didn’t turn out to be the case. She wanted to do an ultrasound scan on him and said she would send an appointment in the post.

Jacob’s reflux wasn’t settling, so I took him back to the GP. He said Jacob had a stridor which was causing him difficulty with breathing, so I went back to hospital with him. 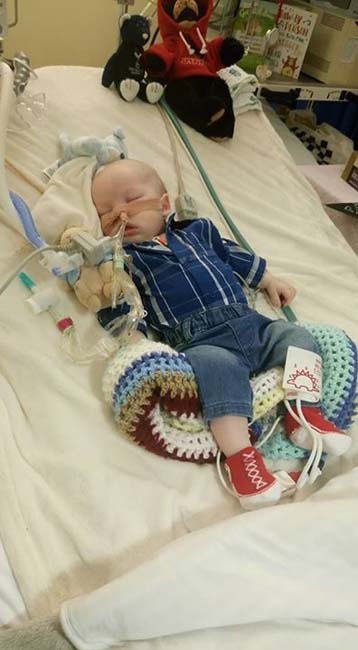 While waiting to be seen, the same consultant from our previous visit recognised us and she immediately took Jacob for the ultrasound scan, seeing as we were there already.

Andy and I were then told they had found a mass on Jacob’s brain which they believed was a brain tumour and they would need to transfer us to a specialist unit. 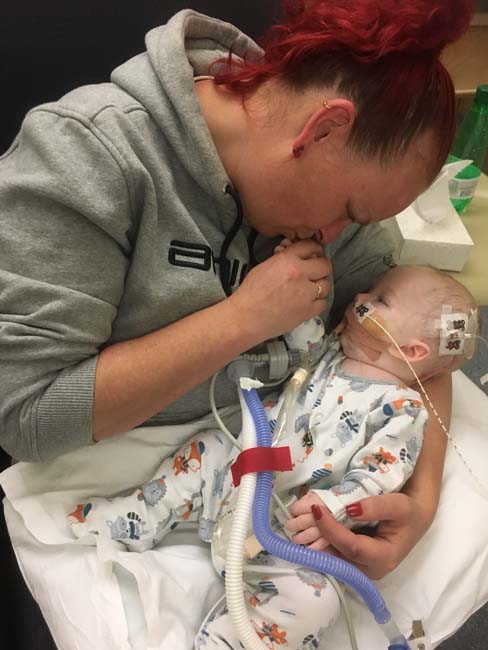 “Jacob was only four and a half weeks old, and, although hoping for the best, I think in my heart of hearts, I knew we were going to lose him”

Jacob was taken by ambulance to Southampton General Hospital where we were told he had an atypical teratoid rhabdoid tumour (ATRT), a malignant, fast-growing form of brain cancer. They are extremely rare, representing around 1–2% of all paediatric brain tumours in children up to 16 years old, and even rarer in infants.

“They said Jacob had a very slim chance of survival, but they wanted to operate on him, and, in early September, Jacob underwent his surgery. The surgeons managed to remove 95% of the tumour, far more than they thought they could achieve, which gave us some hope.”

Jacob spent three weeks on ventilators in the Paediatric Intensive Care Unit (PICU), during which time Andy and I brought our planned wedding forward with a dispensation from the Registrar General to marry quickly. This is something usually only reserved for serving military and terminally ill adults, but if we were going to lose him, I didn’t want him to go with a different surname to mine, it meant so much to all of us to be able to do it. 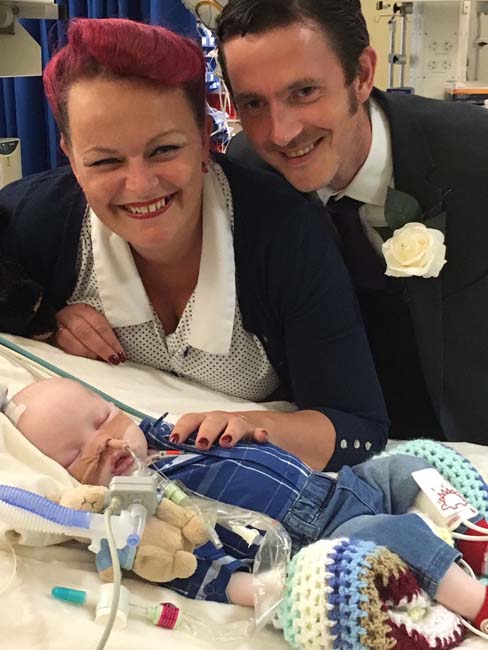 In late September 2016, we were allowed to bring Jacob home. I was his main carer at home whilst Andy was working. We were both given training in every aspect, from CPR and nasal gastric feeding, to using a suction tube to remove secretions from his throat.  The support we had from the medical team was incredible, we never felt alone.

In October, we managed to safely drive Jacob to my hometown, Dumfries, in Scotland to see my parents, grandpa and wider family and friends. That was hugely important to me; we had a lot of laughs and fun, but it was also very emotional.

“At one point, my papa was cuddling Jacob and I noticed he had turned blue, there was clearly something not right and, goodness knows where it came from, but the training kicked in and we kept him going with CPR until the ambulance arrived”

Jacob was taken to Dumfries and Galloway Royal Infirmary. It emerged he had bronchiolitis and that had been playing havoc with his secretions. What should have been a five-day trip became two weeks. 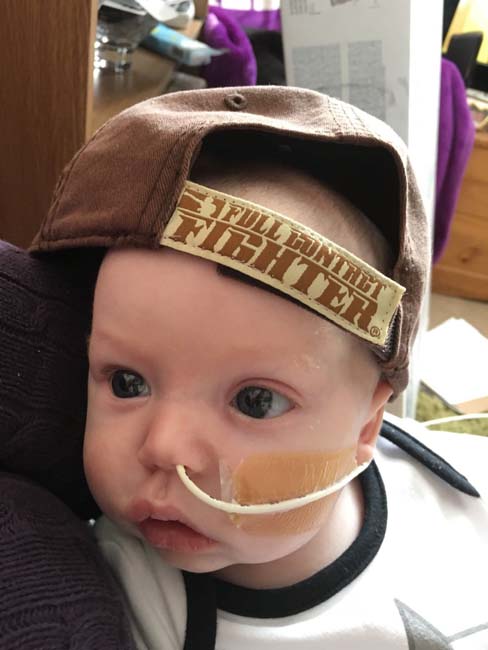 Jacob was going to be airlifted back to Southampton, but because my dad was a retired paramedic of over 30 years, he was allowed to follow us in the car all the way back to Portsmouth in case something happened. Fortunately, the journey was absolutely fine, and Jacob was great the whole way down.

After that, Jacob was doing pretty well. We were able to increase the amount of food he had in one go, giving him more time off the machine, and he was putting on weight. His last check-up was on 31 October, Halloween, the nurses were delighted to see him, especially in his little Frankenstein baby grow. The team said they may be able to consider treatment in the New Year once he was a little stronger.

We were thrilled, there was a ray of hope, but it was short lived. By mid-November, while he was lying on his playmat I noticed Jacob was breathing strangely. I couldn’t clear his secretions and, for the first time at home, had to use his oxygen machine. Andy was at work, so I called an ambulance which took him to the Queen Alexandra Hospital in Portsmouth. 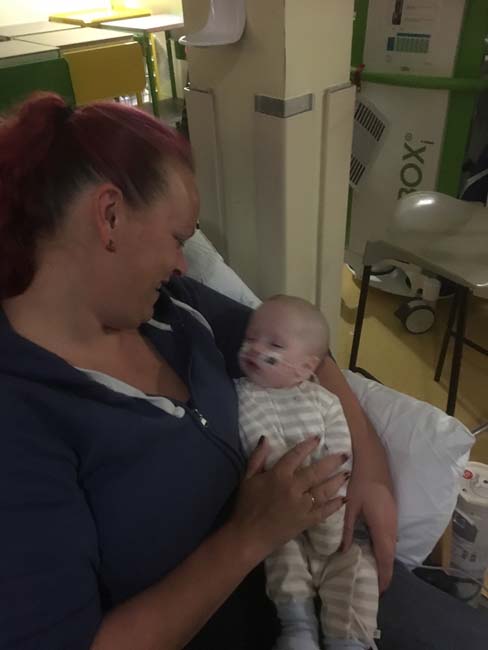 “They thought he had croup and bronchiolitis again but on his second night in hospital, I was woken by the sounds of twenty people in the room and Jacob being resuscitated.”

Jacob was blue-lighted to Southampton General Hospital where he had an MRI scan.

“The tumour was back, and it was bigger than the initial tumour from only a few short weeks before. They also found a tumour on his kidney. At that point, we knew it was over.”

My birthday was on 23 November, and I hoped I could have just one birthday with Jacob, so we asked the doctors if they would be able to keep him comfortable for a few days. This would also allow our family to make the 800-mile round trip to say their goodbyes, but we were vehement that this was to be on the proviso that the second he wasn’t OK, it was time.

Those final few days were amazing; Jacob had over 80 visitors in one day alone, with everyone holding and cuddling him, he set a few PICU records! After a couple of days of open doors, we asked to be left to enjoy the last day or so as a family. We arranged to have a cast made of the three of us holding hands which sits by my bed to this day. We also made salt dough decorations, we painted, but mostly we were just together, the three of us. In the evening of my birthday, Jacob’s eyes changed, like he was saying ‘that’s it Mummy, I made it, but I’m done’, and we knew it was time.

At three o’clock the next day, they turned off his ventilator and Jacob passed away peacefully in our arms a short time later. 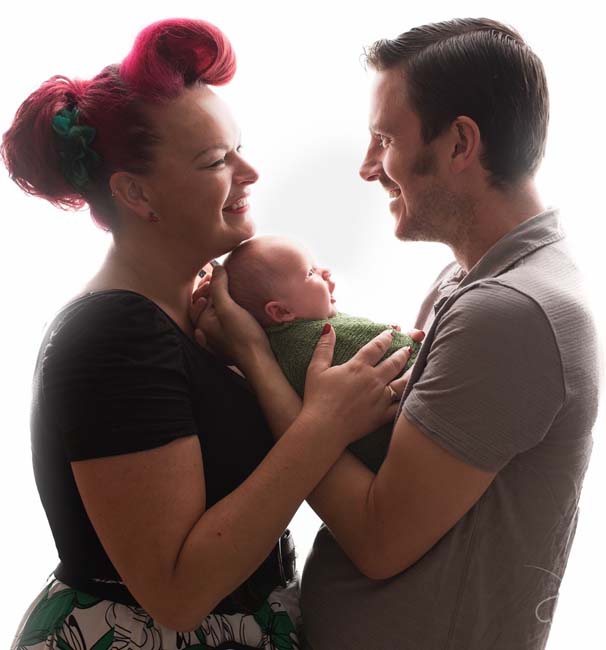 Jacob was born with the tumour. It was sheer bad luck, but it didn’t stop me from asking ‘why Jacob?’.

I’m doing the 10,000 Steps a Day in February challenge to raise vital money for Brain Tumour Research. I want to do this for Jacob; it’s so important to me.

“If just one penny I raise helps other families avoid the heartbreak we’ve been through, then it’s worth it.”

Hopefully, the wee guy will be with me every step of the way. 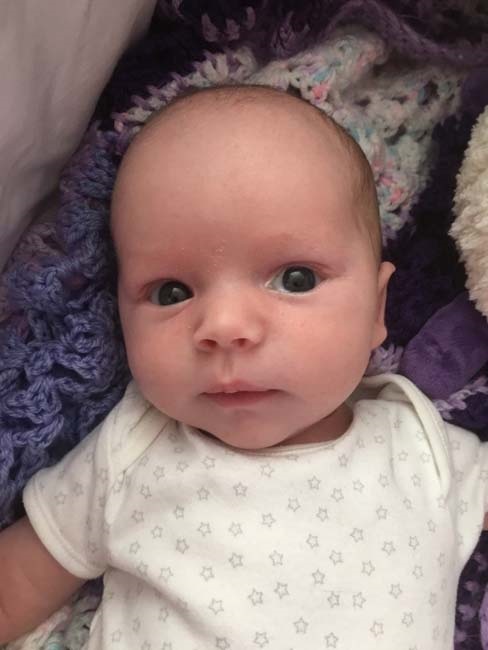