We are grateful to Gordon who worked with us in March 2022 to share his story here. Sadly, he passed away in September 2022. We remember Gordon as we continue our work to raise awareness of this devastating disease and to fund research to help find a cure. He will be forever in our hearts.

Gordon was diagnosed with a low-grade brain tumour at the age of 32, after first being told he had probably suffered a stroke. The tumour progressed to a grade 3 astrocytoma but in December 2021, aged 42, Gordon was told his tumour was now high grade and he had just months to live. Having written a series of comic books to help people understand cancer, Gordon’s journey is now the subject of BBC documentary Long Live My Happy Head.

In the autumn of 2012, I was 32 and living in London, still smoking and enjoying a drink. I was working in hospitality but hoping to find my way into a more creative industry. I had become close friends with Timba who was planning to launch his own studio. We shared common interests, including good food and watching films.

It was at Timba’s house that I had my first seizure while we were having dinner. It took him a while to realise I wasn’t OK as I couldn’t explain what was happening. Just a few minutes later I had another seizure which lasted longer. Timba phoned for a taxi and I was taken to A&E at the Homerton Hospital in Hackney, where I had yet another seizure.

“It was quite alarming when I became aware that I couldn’t remember the pin number to unlock my phone. And even more frightening when I realised I had also forgotten my niece’s birthday and couldn’t recall her name or her elder sister’s name either.”

Added to this, I couldn’t speak so I was provided with pen and paper and encouraged to write. This too proved to be rather complicated.

I had a CAT scan and was told that I might have had a stroke. At 1am I was transferred to the Royal London Hospital in Whitechapel and at around 8am I was moved onto a ward where I saw a consultant who, having decided it wasn’t a stroke. Later I was transferred to neurology; by this time, I think they suspected I had a brain tumour.

I tried to phone my dad who lived in Ayrshire, but had another big seizure and a friend had to take the phone.

“For some reason Dad knew straight away it was cancer. Mum had died of breast cancer when I was 15 years old which had spread to the brain. Tragically, she had been unable to remember my name or that of my brother Craig.”

Five days later, I had an MRI scan which confirmed the diagnosis. The neurologist was pretty sure it was a grade 2 tumour, but one which was inoperable and incurable. It was earth-shattering and left me feeling very depressed, often incapable of getting out of bed.

I had another scan at the end of the year which indicated there might be signs of growth. A further scan a couple of months later confirmed the tumour was growing and I was told it was now grade 3, bringing my life expectancy down further. To confirm this, I underwent a biopsy, followed by six weeks of radiotherapy concurrent with six doses of chemotherapy. It was great to have my friends Linda or Timba on hand to accompany me on the bus to all my appointments. They would help me remember questions to ask, as well as the answers the surgeons gave. 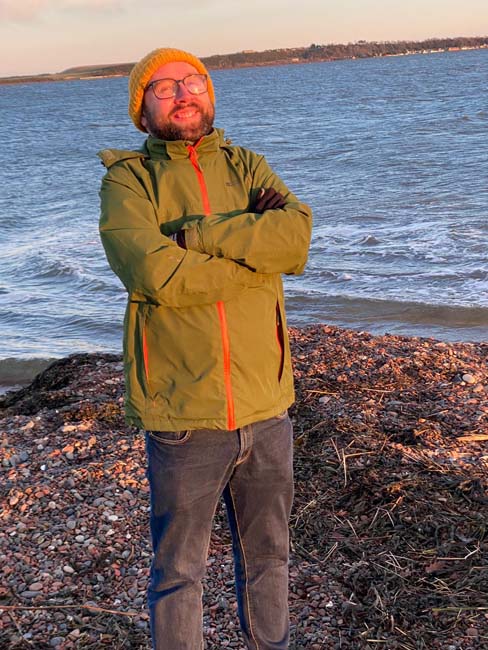 I had thought I would remain living in London, but my brother encouraged me to move back to Scotland. I decided to go and live in Leith, having been at Arts School in Edinburgh, which was also where two of my best friends lived.

I soon felt safe and happy and very settled in Leith and have lived there ever since.

It took a long time to find out the results of my radiotherapy and chemo treatment because of a huge difficulty in getting my records transferred from England to Scotland. Eventually, three months later, I discovered that the tumour hadn’t really shrunk that much, although I was told there ‘wasn’t much cancer to be caught’.

Meanwhile, I started creating a series of comic books to help others understand what it’s like to be diagnosed with cancer and given a terminal prognosis, as well as one dedicated to carers of cancer patients. 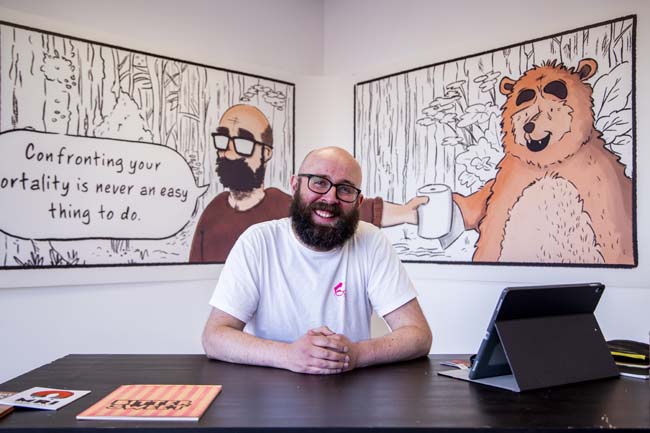 I continued to have seizures. I think my record was 11 in one day.

In February 2019, after a scan showed further growth, I was put on chemotherapy treatment, which did nothing to stop the progression.

“I had another scan at the beginning of the first lockdown in March 2020 and was told by a nurse and a doctor, both fully masked, that I had just months, up to a year left to live. It seemed absolutely brutal and was the worst day of my life.”

Complicating matters was the onset of the pandemic. I was considered too vulnerable being immune-suppressed to continue with a treatment that did not seem effective. It was bizarre to think I was dying because of the brain tumour, but if I caught COVID, it could kill me almost instantly!

I ended up living in isolation with no human contact for months on end.

I was in strict isolation when I turned 40 on 20 May 2020, but to my delight I was surprised by a party on Zoom with lots of my friends and a birthday cake delivered to my door.

Meanwhile Shawn, was stuck in the United States, unable to travel to visit me, although he did manage to get over during a small window in June 2020 when restrictions eased and thanks to friends fundraising to provide him with the expenses to pay for a first-class ticket and the ability to isolate in Scotland before coming to stay with me.

During this time, I had another scan and was overjoyed to discover that the tumour had stopped growing. Shawn and I celebrated with an amazing holiday on the Isle of Harris off the north-west coast of Scotland. 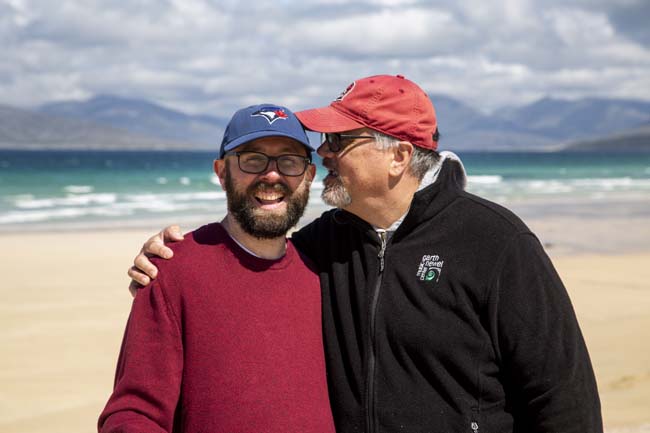 “One evening I was standing on a pristine beach, paddling on the water’s edge with the sun setting and tears pouring down my face. I remember my absolute gratitude to be alive in that moment!”

A year later, however, a scan revealed new and aggressive growth of the original tumour. The multi-disciplinary team proposed some options including PCV chemo again, and more radiation. I decided to try the chemo again, but after just two rounds we found out the tumour was even more aggressive.

“The worst news back in June had turned out not to be the worst after all!”

In the follow-up appointment with my oncologist, I learned that the tumour had given birth to an aggressive new branch. The MDT team recommended surgery to remove the new growth. Up until this point, surgery had never been an option as the majority of the tumour is diffuse in nature and buried deep in my temporal lobe. It turned out that the new growth was nearer to the surface of my skull so more accessible. After consultation I opted to go ahead with surgery to deal with the immediate threat. Once I was sufficiently recovered from the surgery, we would meet again to discuss what could be done about the remaining, deeply buried “parent” tumour.

So, at the beginning of November 2021, I was at the Royal Infirmary in Edinburgh for surgery. The scan on the morning of the surgery revealed that the tumour had already grown 50% since September. Although complicated, the surgery went pretty well. 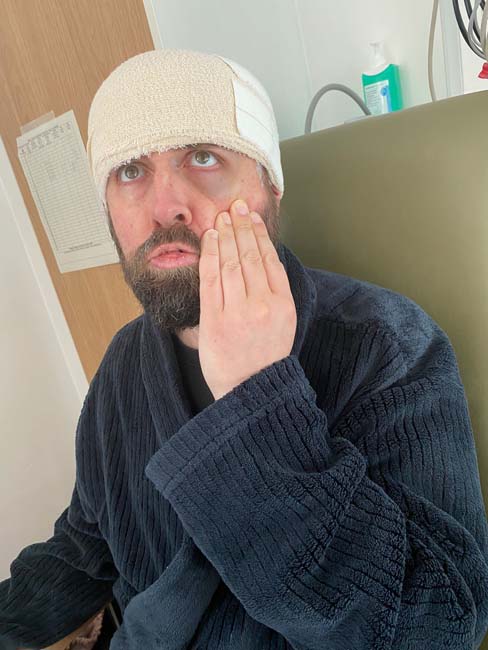 We saw the consultant in December, four weeks after surgery and discovered my tumour had now been graded as glioblastoma (GBM). I was then given a prognosis of just months.

Added to these devastating blows, there was now no recommendation from the team as to treatment. It was up to me to decide what if anything to do. I could have intensive chemotherapy, but this would make me more vulnerable during the pandemic and the likelihood of success with this course of treatment was likely to be 20% or less. Other than doing nothing, the only other option was intensive re-radiation. I underwent the full two-week cycle. It had huge effects on my speech, language and cognition. It was also extremely draining.

Since the surgery I have been left with palsy of the left eye’s optic nerve which gives me fractured vision, especially when I move my head in certain directions. I have a prism in the left lens of my glasses which helps a bit, but the reading glasses I was given I have barely used.

I am grateful that since being diagnosed with an incurable brain tumour I have published five comic books; in the first three I looked at families and friends to understand what it was like for them living with their cancer and in the fourth, titled Bittersweet, I changed the focus to me and opened up about my own experience with cancer. The fifth focuses on unpaid carers - those caring for others, be they partners, children or parents with brain tumours. I haven’t been able to progress with the book as I would have liked because of my treatment over the past few years, but it’s an important subject for me. I really hope someone picks it up and gets it finished. 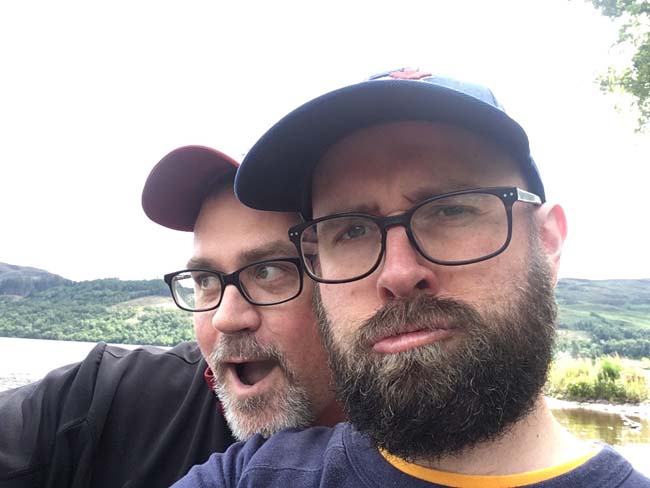 “I have been blessed to have found Shawn, the love of my life. Much of our relationship has been long distance because he lives in Virginia, USA, with him visiting much as he can and when we’re not together talking on the phone every day. He has, however, been by my side since September as I face this final stage of my life.”

When I heard the tumour had become a GBM my dearest wish was to survive to be able to see the Film Premiere on 17 March of Long Live My Happy Head – a documentary on my life charting my journey with cancer and the comic books and my love story with Shawn during the most difficult time of my life, which is to be screened in cinemas across the UK. It looks like I am going to make it! 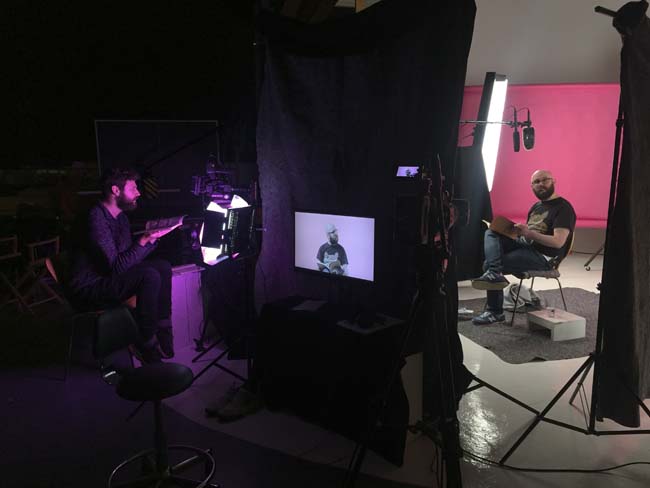 “Having a brain tumour has changed the way I live my life. When I am in my happy head, I often think I might not see too many more of these times, so I try to recognise good moments when I am in them and thank people who are there sharing them with me.” 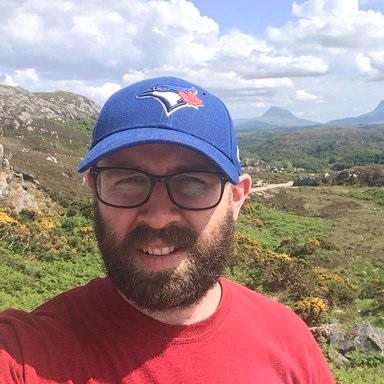