Husband, son, father and step-father, Glenn McMahon was diagnosed with an aggressive glioblastoma multiforme stage 4 (GBM) brain tumour after experiencing co-ordination problems on the golf course. He married Wendy in February 2014 and, knowing their time together would be cut short, the couple set about making the most of their lives through travel, socialising and their mutual love of fine food. Glenn died in June 2015 at the age of 53.

“To be told it was a brain tumour was like being hit by a bus. Glenn asked straight away how long he had and was told the short prognosis. We were devastated. We had begun to suspect Glenn might have motor neurone disease and never dreamt it would be a brain tumour. We had both been married before and having found each other now faced our future which was going to be cut short.”

I had known Glenn for 15 years after meeting him through the youth club which both our children attended at Christ Church, Chislehurst. At my daughter’s request I baked a cake for Glenn’s 40th birthday before I even met him! Over the years, the paths of our two families crossed many times. Some years after our initial meeting, by which time we were both divorced, we got together at a party thrown by mutual friends.

Glenn was very easy going, a larger than life character who had lots of friends. He loved sport, golf, football and cricket, and latterly had the privilege of being Captain of Westerham Golf Club before his illness prevented him from playing. He also loved good food and wine and never passed on a cream tea! Glenn loved music and sang along to Pink Floyd, Madness and Amy Winehouse, albeit off-key. We had a blast and he was such a joy to be around.

I was blissfully happy with a man who I wanted to be with and who wanted to be with me. We travelled to Italy, went to the theatre in town, enjoyed wonderful meals in special places and had weekends away. We often met up with friends and family. Glenn loved his golf and it was while he was on the course that he first realised something was wrong. He started to have difficulty moving his right foot, this affected his position especially when he was putting and, at first, we put it down to a fall.

Our GP said not to worry but to go back in a few weeks if things didn’t improve. From there we were referred to a neurologist and Glenn underwent a number of tests including an MRI scan in 2013. There was a deficit in his left leg although everything else came back normal. A brain scan and biopsy in September revealed he had a glioblastoma multiforme stage 4 (GBM) brain tumour. It could have been growing for years. Glenn had suffered no headaches and didn’t feel unwell despite the fact that the tumour was sizeable, and growing. Its position in the motor cortex area of his brain made it inoperable.

To be told it was a brain tumour was like being hit by a bus. Glenn asked straight away how long he had and was told the prognosis was 12 to 18 months, though he chose not to live by the constraint of numbers but to live every day to the full. He never told people his prognosis as he wanted to protect them from the severity of the situation and get on with his life.

I was devastated. I had begun to suspect Glenn might have motor neurone disease and never dreamt it would be a tumour, least of all inoperable. Through my work as an occupational therapist I had seen people of all ages struck down by brain tumours and had cared for them and their families as their condition deteriorated. Now here I was, as Glenn’s wife, and not as a healthcare professional, caring for my beloved husband, one of the hardest, most heartbreaking, yet precious times of my life.

Glenn had 30 sessions of radiotherapy and three different types of chemotherapy. The treatment was concurrent and although the drug Temozolomide had some impact on the tumour it started to grow in a different direction.

Throughout it all, Glenn was awesome and remained positive and outgoing. He was an example to us all, in the way he coped every single day with such determination and positivity. Although the treatment was brutal, he was determined to fight all the way and we continued to do all the things we loved to do, especially when cake was involved.

We were hoping that Glenn would be able to go onto a clinical trial at one point, but a scan showed he had had a bleed in his tumour which meant this was no longer possible. Another blow, but one where Glenn came out fighting and ready to try another treatment.

We were married in February 2014 when Glenn was part-way through his treatment. Knowing our time together would be limited made it even more special and we had the most amazing day, it was fantastic. After the wedding we continued to get the most out of our lives. We attended Hope Church in Bromley and made many friends there who have been very supportive. I feel like we were married for 50 years, not the 15 months that we had, fitting in so many special times and experiences.

Glenn deteriorated slowly after Christmas, losing the use of his right arm, but still being determined to carry on as normal. The week before he died, he deteriorated rapidly. His speech was affected and following a fall, he was admitted to the Princess Royal University Hospital in Farnborough, Kent. Fourteen hours after his admission after having had a massive stroke, Glenn died peacefully, surrounded by his family.

I knew I was going to lose him but I wasn’t prepared for it to be so very, very sudden. I take some comfort from the fact that he didn’t suffer, he just went to sleep and didn’t wake up.

After losing Glenn, I feel like the centre of my universe has gone. He has left a huge hole not just in my life but for our families too. Between us, we have four children, all are devastated by the loss of Glenn, as are the rest of his family and friends. We are all now on the road of learning to live without him in our lives and it is not an easy journey.

As time passes, it gets harder to be without him. After you get over the shock of bereavement the reality of living every day without that person is hard to bear. Just now I feel a raw-ness at the reality of my situation.

Glenn was very keen to raise money for Brain Tumour Research and so far we have collected around £11,500 through different events and donations in his memory.

It is devastating to learn that brain tumours kill so many people. Just 1% of the national spend on cancer research is allocated to this destructive disease. This is so unacceptable!

Please help us to promote the work of Brain Tumour Research so that we can find a cure for this terrible, terrible disease. 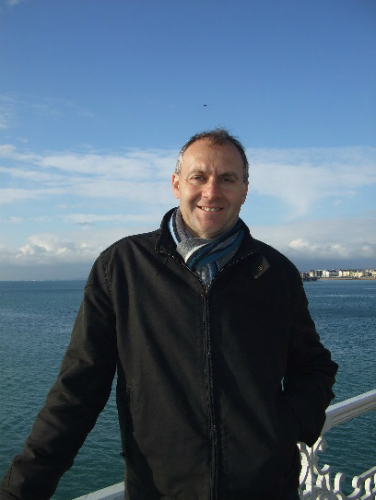