Little Fraser Cullen was just three-and-a-half months old when he was diagnosed with an aggressive brain tumour. He underwent surgery and his parents Vicky and Warren had to make the agonising decision whether to put him through gruelling high-dose chemotherapy which might extend his life by just months or opt for palliative care. Fraser himself helped them to make their decision by smiling at his mum as she sat in Fraser's room with the consultant giving them the news. Treatment proceeded giving the family precious time but Fraser passed away a year later.

“At first, we were dismissed as over-anxious, told our baby had a sore throat and sent home. In fact, the situation was so grave that, with or without treatment, the brain tumour meant there was just a five per cent chance that Fraser would live to see his fifth birthday. Chemo could buy us time but not much, as little as a couple of months. As the country celebrated the New Year, we were making the toughest decision any parent could face. It was so, so hard. We didn’t want to put Fraser through chemo that wasn’t going to work but of course we didn’t want to lose him. As the doctors spelt out the options I looked over at Fraser and he smiled back at me. How could I give up on him?”

Our daughter Elouise was just 16 months old when our second child, Fraser, was born in September 2014. We were thrilled to have two happy, healthy children who were close in age and could grow up together.

Warren and I were busy and tired but having two little ones wasn’t as hard as everyone says it is and we were enjoying every moment. We were looking forward to our first Christmas as a family of four when I noticed that Fraser had gone off his milk. He would only take a little and when he was sick early the next morning I wasn’t unduly worried. Unusually though, I had to wake him for his next feed and when he refused his milk, I began to think something was wrong.

We sought medical advice. Fraser didn’t have a high temperature and there were no specific symptoms so we were told to take him to a walk-in centre in Southend to see an out of hours GP if we remained concerned. An examination there quickly showed that our baby’s fontanelle, the soft spot of his skull where the bones had not yet fused, was tense and this could be significant.

We were referred to a paediatric registrar at Southend Hospital and in this way were able to bypass A&E and go straight to an assessment unit. I had noticed Fraser’s eyes flickering back into his head a couple of times but was told it was nothing to worry about. The earlier concern about the fontanelle was dismissed and we were told not to be over-anxious. After a thorough examination, we were told that Fraser had a sore throat and we could go home. Although he didn’t seem any better I thought I should accept the explanation we had been given.

When Warren’s parents visited us on 23rd December my mother-in-law also saw Fraser roll his eyes back. It was most noticeable when he was picked up – I had no idea at the time but it was being caused by the increased pressure in his head and was a known brain tumour symptom.

I was becoming very stressed and panicked that perhaps Fraser was fitting and we went back to the hospital. He was examined again and bloods were taken. Fraser was put on antibiotics and when the blood test came back clear he was taken for a CT scan “to rule things out.” At that stage, I felt relief that at least Fraser was being thoroughly examined.

The scan took place that evening. Warren had taken Elouise home and my dad came down to support me. I carried our three-and-a-half-month-old child and handed him over. As I walked back to the ward I hoped we wouldn’t get the results until the following day – any earlier and it would mean bad news.

Less than an hour later a doctor came to find me and the news was worse than bad. The scan had revealed a mass on Fraser’s brain and we were being transferred immediately to Great Ormond Street Hospital. First, on Christmas Eve there was surgery to insert a drain in order to relieve the pressure which was building up in Fraser’s head. Then there was an MRI scan and the tumour was removed during an operation lasting six-and-a-half hours.

The surgeon seemed pleased: he had been able to remove the entire tumour which had grown to the size of a small orange and there was no evidence it had spread through the brain stem into the spinal cord. But two days later, on New Year’s Eve, we found out that Fraser’s brain tumour was cancerous. It was a very aggressive Atypical Teratoid Rhabdoid tumour (AT/RT) and as bad as it could be. We were faced with making a very stark choice: opt for six months of high dose chemotherapy treatment with stem cell transplant or choose palliative care.

The situation was so grave that, with or without treatment, there was just a five per cent chance that Fraser would live to see his fifth birthday. Chemo could buy us time but not much, as little as a couple of months. As the country celebrated the New Year, we were making the toughest decision any parent could face.

It was so, so hard. We didn’t want to put Fraser through chemo that wasn’t going to work but of course we didn’t want to lose him. As the doctors spelt out the options I looked over at Fraser and he smiled back at me. How could I give up on him?

It was agony to learn that brain tumours kill more children and adults under 40 than any other cancer … yet just 1% of the national spend on cancer research has been allocated to this devastating disease.

Fraser started treatment and, looking back, it was the right choice. It was heart breaking of course but it did give us time to get to know our son and see his little personality start to develop. The chemo lasted for six months and we were in hospital for pretty much all of that time. Complications during surgery meant Fraser was no longer able to swallow and had to be fed through a tube. He developed breathing problems and eventually had a tracheostomy where they cut a hole in the windpipe and insert a tube.

In my work as a nurse, I had seen this done to help elderly patients but it seemed so cruel and harsh for a baby, my baby. It helped though and as Fraser’s condition improved we were allowed home. Chemotherapy continued and in July, we were home for good following the end of treatment. In September were able to take a holiday thanks to the generosity of the charity ACT (Aid for Children with Tracheostomies) which lets out a caravan to families such as ours. Despite all his problems, Fraser smiled his way through the long car journey. He was happy, we had easy access to medical assistance should we need it and, despite everything, we had a nice time.

Even though I knew the tumour could and, most likely, would come back I started to think that maybe, just maybe, we were through the worst. Fraser looked so well and for his first birthday in September we had a little party at home. He even started hitting some developmental milestones, rolling over and standing up.

But any slight optimism we dared to hope for the future was short-lived. A scan in October revealed the tumour was back. It was just a tiny area in his brain stem but, this time there was no chance of a cure. Any treatment would be purely palliative. Fraser had only just had high-dose chemo and any more would severely damage the bone marrow where new blood cells are made. At best, we had just three months left.

We decided our only real option this time was to take Fraser home where we could give him the best possible quality of life for the little time he had left. By mid-December, he was being sick again in the mornings and one side of his face appeared to have drooped. The tumour was growing.

Fraser’s condition deteriorated from there. Any movement would make him sick so, for five-and-a-half weeks, we stayed at home. It broke my heart that I couldn’t even hold him in my arms. All I could do was, be there for him and hold his hand as he lay on the sofa. Fraser lost his mobility and then stopped taking his milk. For the last week of his life, he wasn't able to take anything at all, even water. I felt as if I was starving him.

Fraser passed away on Sunday 10th January 2016. He was 16 months old, to the day. I dressed him in a little suit for his funeral and placed a special teddy bear, which had been with him throughout, in his arms. Our darling boy’s ashes are with us at home.

We have Elouise so, for her sake, we have to try to get on with things. I have gone back to work part-time although I find it impossible to go anywhere near the oncology ward. Elouise thinks that her brother is on the moon – I don’t know where she got that from – but there are some things that just can’t be explained. It’s just a hope but I do believe that, in some way, Fraser is still with us. 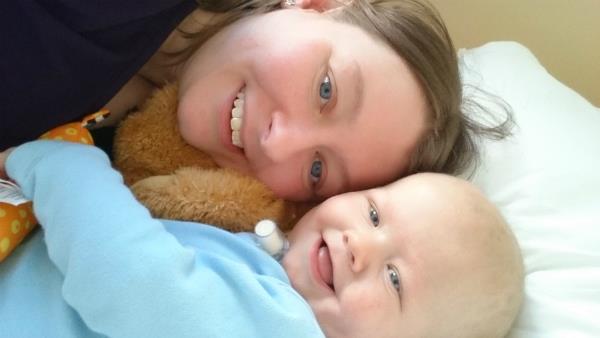