Fiona Bingham was just 33 when she passed away at her home in Chesterfield in March 2017. The guidance officer at Chesterfield College left behind her husband, Mark, parents Dodie and John Rutherford and her older brother, Alastair. Fiona, an International Hospitality graduate, was diagnosed in March 2015, following an eye test and subsequent scans. She underwent brain surgery, radiotherapy and chemotherapy to treat the tumour but, sadly, in February 2017, Fiona and her loved ones were given the devastating news that the treatment had stopped working and was being withdrawn.

Here is Fiona’s story, as told by her parents, John and Dodie…

The way in which Fiona managed her illness was remarkable. She never turned in on herself or succumbed to self-pity. She was always outward looking and seeking ways to help others, for example fundraising for the Sheffield Neurocare charity. She also gave a lot of support to the local RSPCA; rattling collection boxes, managing stalls at their fairs and giving voluntary help at their centre. In her memory, her husband Mark has continued to give them voluntary support, particularly helping in their charity shop.

“Fiona began suffering with headaches in 2014. She had been also having problems with her vision, including seeing auras, and so she went to see her GP.”

The GP suggested it was probably stress or anxiety-related and she was prescribed anti-migraine medication, which didn’t work. In March 2015, Fiona and Mark were due to fly to Australia to attend a friend’s wedding. As she was still having sight problems, one Saturday afternoon before their trip, Fiona went to Boots Opticians with the intention of picking up some prescription sunglasses. While undertaking the retinal imaging during her appointment, the optometrist detected an abnormality behind one of her eyes.

From that point onwards things moved pretty quickly. She had a CT scan that night at Chesterfield Royal Hospital, which confirmed there was something in her brain which shouldn’t have been there. She was sent to The Royal Hallamshire Hospital in Sheffield for a more detailed MRI scan and within a week she was undergoing brain surgery to remove as much of the tumour as possible. The seven-hour operation took place on Friday 13 March 2015. We remember vividly the anxious wait and then finally, at 5.10pm, being told that the operation had gone well. We were so relieved. The surgeons had been fantastic and she was looked after really well by the great staff on the N floor of the hospital. Following a biopsy, the tumour was diagnosed as a grade 3 astrocytoma, located in her left temporal lobe. It was close to some major blood vessels, so they couldn’t remove all of it. She was left with a small scar, just behind her ear. 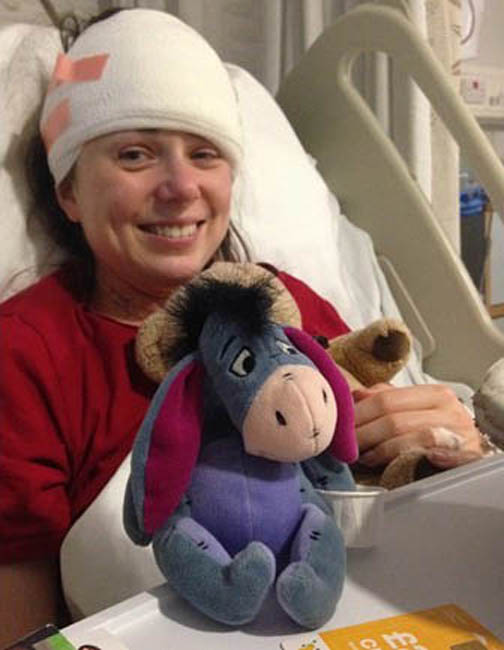 Once she had recovered from the craniotomy, Fiona underwent a six-week course of radiotherapy at Weston Park Cancer Centre in Sheffield, which began in June 2015. She coped remarkably well with this treatment. She would become sleepy in the afternoons but other than that she didn’t suffer too many side effects, or if she did, she just took it on the chin. She displayed no sadness; remaining stoical and brave throughout.

“The tumour seemed to reduce significantly after the radiotherapy and she had a run of stable MRI scans. Then, in March 2016, we were hit with the news that the disease was in progression.”

Fiona was put on a course of gruelling chemotherapy, on four-week cycles. By the late summer of that year, there were some signs that the tumour was reducing in size again. We were absolutely overjoyed, thinking we had really turned a corner. But then, inevitably, it came back and was now affecting many of her functions, including her speech and her memory. By December 2016 she was being hit very hard by the treatment and it was withdrawn two months later to improve her quality of life as she neared the end.

“Even during the early days of our brain tumour journey, we realised the terrible statistics surrounding the disease and the vital need for more funding in this area of cancer research.”

As Fiona’s condition deteriorated and we were running out of options, we became all the more aware of how desperate the situation really is. We investigated and researched every avenue including private treatment on Harley Street in London and clinical trials elsewhere in the UK and overseas. We were prepared to try anything to save our beloved daughter. We understood the stark prognosis but never accepted it.

During the first three months of 2017, Fiona’s illness became increasingly unmanageable. Fiona died at home in the early hours of 30 March 2017, surrounded by her loved ones.

Losing Fiona to this awful disease has caused untold pain but we try to go on with the positivity and good humour that Fiona would have wanted. Fiona had a great sense of humour and was a wonderful daughter. In November 2017, our son Alastair and his wife Maria welcomed their first child and our first grandchild into the world. They named her Esme Fiona. Becoming grandparents has given us much-needed comfort and joy when everything else seemed so bleak. More good news followed in October 2019, when we celebrated the birth of our first grandson, Finlay Patrick. Mark, was chosen to be Finlay’s Godfather; a role which he took on gladly and with a great sense of pride.

“Since losing Fiona, Mark has been dedicated to fundraising. In 2018 he completed the London Marathon, raising thousands of pounds for Brain Tumour Research, to help fund a network of dedicated research centres where scientists are focused on improving outcomes and, ultimately, finding a cure.”

This year, with the help of Mark and a very good family friend, Jane Webster, who was always called “Aunty Jane” by Fiona , we are organising a fundraiser at Ringwood Hall Hotel in Brimington, to coincide with Brain Tumour Research’s national Wear a Hat Day campaign. One of Fiona’s hobbies was baking cakes and so we decided to make the event an afternoon tea, with guest speakers, a raffle and free goody bags. As well as raising money for this vital cause, having events like this in the diary really helps, as we continue to come to terms with our tragic loss. It will be a celebration of her life, perfect for Fiona, as she loved organising parties and was so good at it, having trained in hospitality at the University of Huddersfield and having worked in hotels in Chelsea, West London and Orlando, Florida. We have also been helped enormously by Wear a Hat Day events at Whittington Green School in Chesterfield, formerly known as the Meadows.  This is the school where Dodie was a teacher and where Fiona, Alastair and Mark were students. We have enjoyed going in and seeing the hats designed and made by the students and explaining to them the importance of fundraising for Brain Tumour Research. The day ends in the most amazing parade of hats and Dodie given the almost impossible task of awarding prizes for the most imaginative creations. 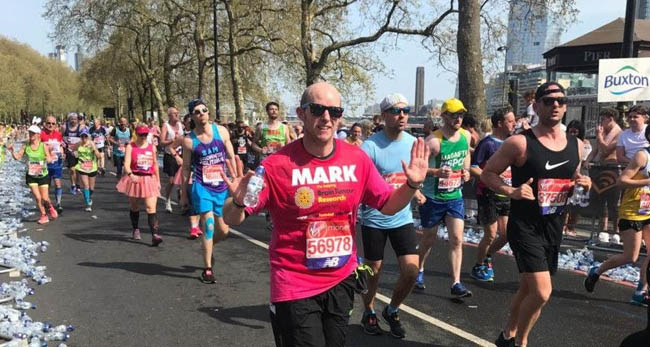 Some of Fiona’s ashes are scattered on a beach in Bamburgh, Northumberland, where she and Mark got engaged. The rest are scattered in a bluebell wood near to where we live. They have a beautiful display of bluebells every Spring. March is a hard month, with the anniversary of Fiona’s death but with Spring around the corner, we are looking forward to going to the woods again to admire the violet-blue blanket and to remember our darling daughter.

If you have been touched by Fiona’s tragic story, and would like to know more about our lobbying, research updates and fundraising opportunities, please sign up to our weekly e-news. 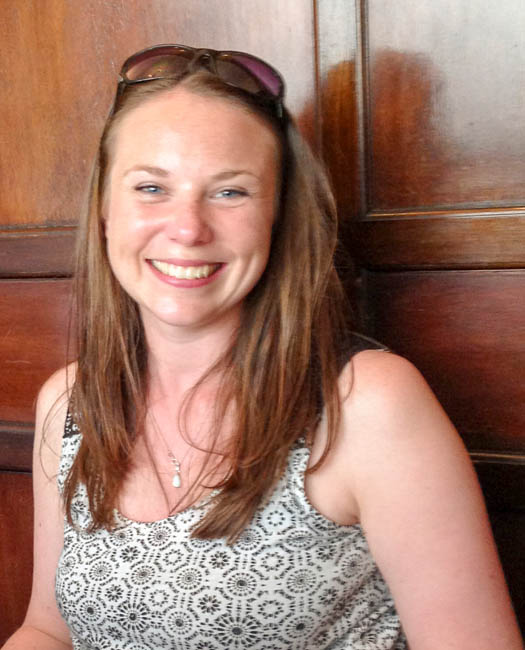