Finnbar was a happy, active five-year-old boy, enjoying life to the full, when he started experiencing dizziness and later staggering when walking. After several trips to the GP, his family eventually got him referred. Tragically his diagnosis with a low-grade astrocytoma brain tumour, was changed a couple of months later to a more aggressive glioblastoma multiforme (GBM). His parents, Tristan and Claire, were given the devastating news that there was nothing that could be done to save their son. Just five months after being diagnosed, Finnbar passed away, just weeks before his sixth birthday.

“We are determined to see something good happen in Finnbar's name and memory. We hope that we can use our experience to make things better for other families that find themselves going through similar, heart-breaking situations, and ultimately to bring about an end to the evil of childhood brain tumours.”

Here is Finnbar’s story, as told by his father Tristan…

Finnbar enjoyed a lovely start to life, doing all the things little boys love doing. Among his favourite things were going to the park, riding his bike, climbing trees and playing football with his dad. He loved action heroes and dinosaurs and, being an early riser, would often be up at 7am, having dressed himself and made his own breakfast. Finnbar was full of life and fun.

He enjoyed being around his loving family, including his little sister Nell who was 21 months younger. The two of them were inseparable – Finnbar would always look out for Nell and tell her off if she did something wrong. Meanwhile, Nell looked up to her big brother and was always copying him.

Finnbar was a pupil at Hethersett Woodside Infant & Nursery School, where he was doing really well. He was a fantastic reader and absolutely loved stories, always insisting on at least two at bedtime. The school have been so supportive to the charity we set up, always putting on events and having collections.

Just a year before Finnbar died, he had become a huge Star Wars fan and had watched the films loads of times. A number of schools in our local area celebrate May 4th (May the Force be with You) in his memory by asking the children to dress up as Star Wars characters. The celebrations at Hethersett Woodside also extend to a Star Wars-themed menu at lunchtime, a disco after school and the staff dressing up too.

The first signs that anything was wrong came in November 2015, a couple of months after Finnbar’s fifth birthday, when he started to complain that he felt dizzy. At first it was every few days, but after a couple of weeks it had become every day. We saw the GP who put it down to an ear infection.

Over the next couple of weeks, his dizziness was getting no better and was now happening several times a day. We saw the GP again and were told to come back again if it carried on for much longer. By Christmas we noticed that he seemed to be developing other subtle symptoms, such as sometimes staggering whilst walking; and his behaviour changed. He even said that he didn’t feel like himself anymore.

By January 2016, we were beside ourselves with worry, and having already had at least three GP appointments, we secured yet another GP appointment, and finally got Finnbar referred to the Norfolk and Norwich University Hospital. A brain scan revealed abnormalities in his cerebellum, but we were relieved to be told that it may not be the worst case - a tumour - at all, and, even if it was, it would be low-grade (slow-growing and not aggressive).

After several weeks of observation at Addenbrookes Hospital, Finnbar continued to deteriorate, waking up one day screaming in pain with a headache and projectile vomiting.

The next day he underwent emergency brain surgery to relieve high pressure in his brain. During the same hospital stay, a biopsy was taken and, in early March, our worst fears were confirmed - he was diagnosed with a grade 2 astrocytoma, which is very rare in younger children.

Finnbar began chemotherapy soon after. He was incredibly brave throughout his illness and treatment, being subject to many terrifying MRI scans, needles and operations; even the horrid daily task of taking numerous tablets. He spent many nights away from home in hospital, but he never complained and tried his hardest to be his usual, happy self. However, instead of improving during the course of his treatment, he seemed to worsen.

It was very worrying, particularly as, with our backgrounds - mine as a paramedic and Claire’s as a nurse - we had enough knowledge to believe that his behaviour wasn’t typical of a patient with a low-grade tumour. However, when we flagged up these behaviours to the doctors, we felt we were being given the brush-off.

In May 2016, after another long hospital stay and further tests, our worst fears were realised when we were told that the initial diagnosis was incorrect and that the tumour was a much more aggressive type. Not only that, we were given the heart-breaking news that the doctors felt that there was nothing that could be done to save, or even help, our dear little son.

Claire and I refused to give up so easily and neither would Finnbar, despite being desperately poorly. We obtained a second opinion from Great Ormond Street Hospital and managed to push for radiotherapy to be commenced urgently to keep him alive. We were warned many, many times that Finnbar wouldn't make it through another night, but he kept fighting and got through the radiotherapy.

We left Addenbrooke’s after four weeks and spent a week at East Anglia’s Children’s Hospice in Quidenham, Norfolk, where everyone was wonderful to us. Finnbar seemed so settled and comfortable, and was even showing a few signs of improvement neurologically. We took him home in early July and did as much as we could with him over the next few weeks, even managing to get him out and about in a new car we were able to buy following the wonderful fundraising efforts of friends, family and our amazing local community.

Sadly, however, some of the essential medications that he was taking had some very nasty side effects which caused serious complications. On Friday 5th August 2016, just five months after he was diagnosed, despite having had several good days beforehand, Finnbar became very poorly. That evening we cuddled him as he slipped away from us.

From the moment Finnbar became sick, our lives completely stopped and the time since has been unbearable. I stopped working in the resuscitation room within the A&E Department at Norfolk & Norwich University Hospital (having left the Ambulance Service the previous year) when Finnbar became very ill. Returning to this environment after he passed away has so far been too difficult for me to contemplate because Finnbar spent a lot of time in the hospital and particularly because he was rushed into the resuscitation area on the night he died. For the time-being, I have been seconded back to the ambulance service, working to train new recruits.

Nell was only four at the time and misses Finnbar terribly. She talks about him a lot and finds it very difficult, particularly because she has no one of a similar age at home to play with any more. When Finnbar was around Nell was very boyish and enjoyed boy’s stuff. Without his influence she has become more girly and the house seems so much quieter. Nell has had to learn to occupy herself or we have to help keep her occupied.

We definitely need a better understanding of effective treatments for brain tumour patients. I didn’t feel we were very supported as we often found we couldn’t get hold of doctors when we wanted to. For this reason, I am passionate that we need patient advocates in place.

We are determined to see something good happen in Finnbar's name and memory. We hope that we can use our experience to make things better for other families who find themselves going through similar, heart-breaking situations, and ultimately to bring about an end to the evil of childhood brain tumours. To this effect we have set up a charity in his memory which we have called Finnbar’s Force to support families who have a child diagnosed with a brain tumour, to raise funds for research into childhood brain cancer, to raise awareness of the disease and its debilitating effects and to campaign for improvements in the current standard of care and support available, as well as for more research.

Finnbar’s Force is the light that will shine through incredibly dark times.

If you have been inspired by Finnbar’s story, you may like to make a donation via www.finnbarsforce.co.uk/donate or leave a gift in your will via www.braintumourresearch.org/legacy 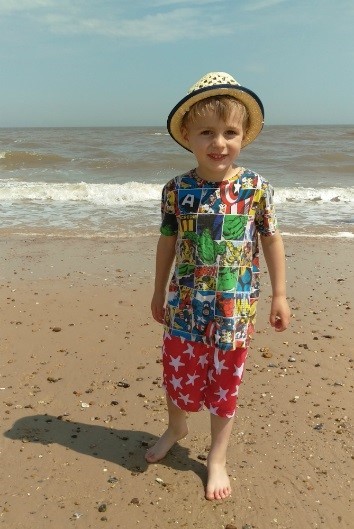