Mum was diagnosed with breast cancer in 2005 and fought bravely against this.  Two years later, she was given the all clear.  She continued to have annual screening and was always relieved with the positive results she continued to have.
Then suddenly in August 2011, without any other indications, Mum started to experience seizures.  She visited the GP on a number of occasions before finally being referred to Neurology.  In November 2011, Mum was diagnosed with epilepsy.

It wasn’t until January 2012 that Mum was diagnosed with a brain tumour – a secondary cancer from her previous breast cancer.   Just eight weeks later, Mum died in hospital, after having an operation to remove the tumour.  It was such a shock for everyone that knew her to see this hard-working lady torn apart and taken by this disease in only a few months and at a time in her life when she was about to slow down and enjoy her grandchildren growing up. 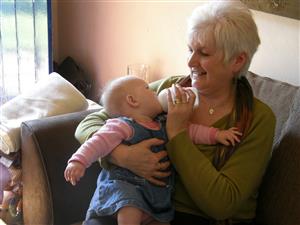