Professor of Medicine, Genetics and Pharmacology and Director of the Institute of Personalised Medicine at Indiana University in the USA, David Flockhart devoted his career to pioneering breakthroughs against cancer.

Having lost his mother and cousin to glioblastoma multiforme (GBM) tumours, it was unfortunate when David found himself battling a GBM, a cancer where he felt that conventional treatment had not changed in 50 years.  Knowing that his prognosis was poor, David wanted to communicate his medical knowledge widely, and through his broadcasting work, let others understand what it was like to live with the devastating effects of a brain tumour before he died.

“My brother was convinced that there had to be a genetic link, or at least a predisposition, to brain tumours in our family.  Three of them, all in my mother’s blood line, diagnosed with GBM.”

Here is David’s story, as told by his brother Andrew:

David was 62 when he was first diagnosed.  Up until then, he was a successful scientist and medical researcher based in Indianapolis.  After moving from Scotland to the USA in 1976, he loved to run, play his guitar, campaign for human rights and spend time with his three children.

At the beginning of 2014 he began to notice that his coordination was off, that going up and down stairs was becoming increasingly difficult, and that turning around made him feel ill.  As a doctor, he knew that something wasn’t right, he suspected it might be bad and referred himself for CT, PET and MRI scans.  They identified a 3.5cm parietal grade 4 GBM on the left side of his brain.

Our family was devastated by this news, as two years earlier we had lost our mum, Pamela, to a GBM, but hers was inoperable and she received only palliative care for the ten months between her diagnosis and death.  And this wasn’t the first GBM in the family, because our cousin also died from a GBM in 1999, a year after his diagnosis.

David was convinced that there had to be a genetic link, or at least a predisposition, to brain tumours in our family.  Three of them, all in my mother’s blood line, diagnosed with GBM.

In September 2014, David had surgery to remove the tumour.  He was very lucky that one of the world’s best neurosurgeons was based at Indiana University, and Dr Scott Shapiro removed the tumour with an MRI-guided open craniotomy.  The operation was successful and David made a good recovery, it gave us all some hope.

There were side effects from the surgery, obviously.  He needed extensive physiotherapy to help him walk again, his ability to play the guitar was diminished and he was no longer allowed to drive.  Our brother Patrick travelled out to be with David after the surgery to arrange home care services, I visited a month later to help him find a new apartment that was within walking distance of his work, and his daughter Julia gave up her college course to look after him at his home.

Another side effect was that he completely lost the ability to write, and for some time was unable to type or text, relying heavily on voice activated software on his smart phone.  Further physiotherapy regained some function, but he was never able to write by hand again.

David then underwent radiotherapy and chemotherapy, and was prescribed steroids.  He managed to continue working as Professor of Personalised Medicine after his treatment, although he had to reduce his hours from full-time to 2 days per week.  He wanted to help people understand what it’s like to live with a brain tumour and so took part in a number of radio interviews on PBS, the public broadcasting service in the USA.

David was pragmatic about the situation and his prognosis.  He knew he was on borrowed time, and that even with surgery and treatment, he only had between 9 and 15 months to live.  But that didn’t faze him, he would tell me “I’m lucky, Andy, I know how long I’ve got and I’m going to make the most of it.”

David’s medical background meant that he had so much more knowledge about his brain tumour than the average person.  He felt that conventional treatment plans appeared not to have advanced since the 1950s, and was convinced there had to be something out there to help him.  He tracked down clinical trials in Ohio and Chicago for new treatments, but unfortunately for one of them he was too ill to be accepted and the other was ineffective.

After the surgery, David worked for around nine months on a part-time basis, although he also pursued his passion for international travel, which included visiting the family home in Humbie, Scotland, me in Poole, as well as trips to Tuscany, London and Paris in early 2015.  He also visited New York in June 2015 to attend the wedding of his son Andrew at the botanical gardens on Staten Island.

In July 2015, aged 63, David finally stopped working as his condition had deteriorated.  He was still physically fit, but the effects of the tumour were too much for him to continue in his role.  He did continue to visit the laboratory and see the team, whom he missed terribly.

Once David “retired”, he kept himself socially active.  He loved entertaining his friends, made sure he did his 10,000 steps every day and met friends in the park to achieve his goal.  He was visited by friends and family regularly and his physician, and Professor of Oncology at Indiana School of Medicine, Dr Pat Loehrer and colleagues from the laboratory were particularly kind.  My brother Patrick kept in regular contact and made sure he was being well looked after.  It was truly an international effort to care for him.

None of us knew how rapid the decline would be once he stopped working.  It accelerated in September with the discovery of another tumour, and by the end of October he was wheelchair-bound, had lost much of the ability to speak and required care services at home.  His sons Andrew and Peter returned from their homes in New York and Boston to be with him and Julia.

We tried to stay positive, but in the end David died at Thanksgiving, 26th November 2015.  I was by his side, along with Andrew, Julia and Peter.  In the space of three years I had lost my mum and brother to the same disease, but this time it seemed so much worse.  I know it sounds strange, but it’s actually harder to lose a brother than a parent.

David’s death was a huge shock to everyone at Indiana University and to the medical science community across the USA.  The University arranged a memorial service shortly after his death, which was attended by about 200 former colleagues and friends from all over the country.  His many medical research achievements and awards were celebrated, but most of all we mourned the loss of his kindness and the generosity of his spirit.

We arranged a private funeral for David, attended by family and his closest friends.  The service was led by our lifelong family friend, Rev. Ben Sparks, from Richmond, Virginia.  Patrick returned from Edinburgh and our sister Carola came from Perth, Australia.

In July 2016, Patrick arranged for a celebration of David’s life at the family home in Humbie.  Our family was joined by over 100 friends from his childhood, school days in Edinburgh and his time at the University of Bristol.  We had a small ceremony at the local churchyard, and a stone plaque for David was blessed.  Dr Pat Loehrer gave a speech about David’s great achievements in his medical science career, bringing tears to everyone’s eyes.

I had been a supporter of Brain Tumour Research for a couple of years, my first donation was linked to my mum around Wear A Hat Day.  After losing David, it seemed appropriate that I should carry on supporting a charity that is devoted to finding a cure through research, as this is exactly what he did during his career through his work on diabetes and breast cancer.

It is shocking that research into brain tumours receives such little funding and relies so heavily on charity.  Less than 1% of the national spend on cancer research has been allocated to this disease, and that needs to change.  In David’s own words, recorded in December 2015, he said “I realised very quickly what was not known about this disease and that is frustrating because it is classified as an orphan disease, it doesn’t get a lot of attention.”

I did run a bit before David died, but I don’t feel that I am naturally aerodynamic!  This year I have taken up 5k park runs, and am now working my way up to the 10-mile Great South Run 2016.  It is a very long way for me to run, but it’s for my brother, and I can’t think of any better way to honour his memory. 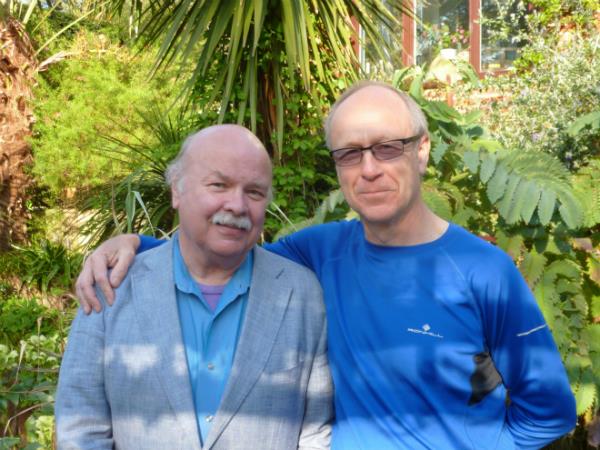