Andy married his childhood sweetheart and together they had two children and a lovely life. But then Andy started shaking uncontrollably, leading eventually to his diagnosis with an inoperable and incurable DIPG brain tumour, much more common among children. Radiotherapy changed his personality and his marriage broke down. Andy passed away three and a half years after his diagnosis, aged 33.

Andy and I met when I was 15 and he was 16 and were together for half of my life. He was a wonderful guy, so kind. Andy loved a drink and a party and making people laugh. He had so many friends and was a real happy-go-lucky guy until he was diagnosed with cancer. 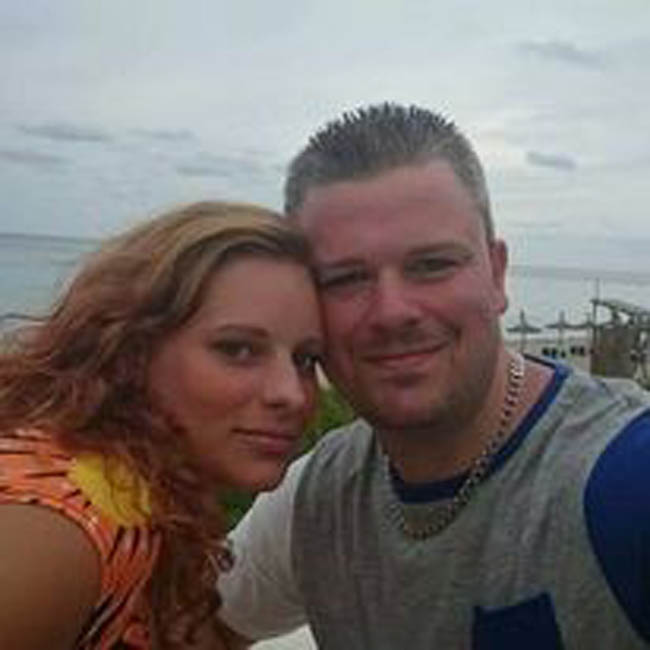 We had a fantastic life and two lovely children, Katie, now 11, and Callum, five. Andy had a good job as a lighting designer, working originally for Phillips before he was head-hunted a number of times. He also had his own vape juice business known as Drew’s Drips. In later years he was able to work from home, which allowed him to take Katie to school and pick her up and watch the kids grow.

“We really felt like we had it all, until cancer struck.”

In the autumn of 2016, Andy started having funny turns. One day I was on the phone to him when he started shaking, whilst going down some stairs and he dropped the phone. The GP diagnosed vertigo and put him on anti-dizziness tablets.

However, his symptoms became more severe over a period of some six months until Andy was shaking uncontrollably.

This time the GP referred him to the Name of Hospital eye clinic after becoming concerned about pressure at the back of his eyes. Andy had an MRI scan which was how we found out that Andy had a tumour on his brain stem, blocking his cerebrospinal (CBS) fluid.

On Valentine’s Day 2017, Andy was referred to the Queen Elizabeth Hospital in Birmingham for an emergency operation to save his life. Doctors put a hole in the membrane to allow his spinal fluid to flow in and out of his brain and told us his tumour, which couldn’t be removed, would be monitored from thereon. Katie became very worried about her dad from this time.

Three months later, the tumour was found to have grown. Andy agreed to go ahead with a biopsy to see if the tumour was cancerous, although he was warned it was very risky surgery. He woke up after the procedure on 23 July with slight short-term memory loss, numbness in the two little fingers of his left hand and problems focusing his eyes. Luckily these were only temporary, although the numbness in his fingers persisted for a year.

“Two weeks later, we were given the devastating news that the tumour was a diffuse intrinsic pontine glioma (DIPG) which is uncommon in adults and that it was most definitely cancerous with no cure. Andy was given a prognosis of two to three years.” 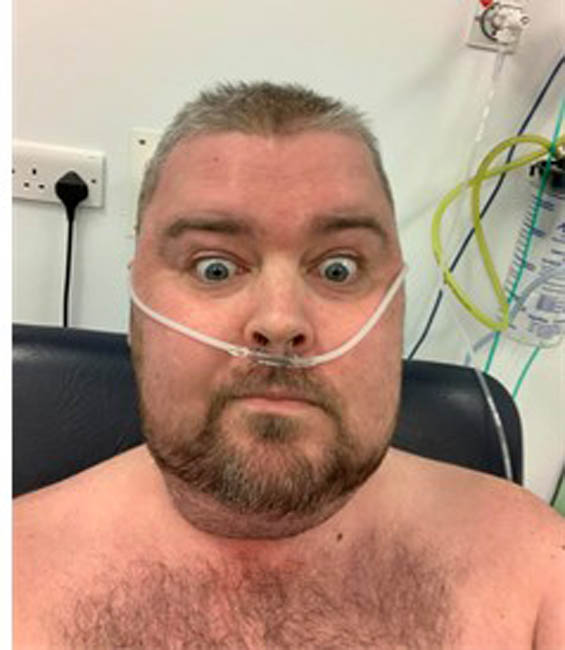 Andy understood the implications straight away, but I found myself in denial. I was convinced he would beat it.

In August we went away to Wales for a week’s holiday before Andy started radiotherapy and chemotherapy treatment. We decided we had to get away as we didn’t know when we would have the opportunity to go away again. We had a beautiful week in Tenby, the weather was amazing, we played on the beach and built sandcastles with the kids and took a boat to Caldey Island.

After our return home, Andy started radiotherapy at the Queen Elizabeth every weekday for six weeks and had chemotherapy in tablet form. This was followed by a complete break before he resumed chemotherapy, but on a much higher dose, until he had had enough. Andy was really unwell on the chemo, sleeping for 20 hours each day and throwing up. He really didn’t want the kids to see him in such a bad state so after about six months he decided, in the light of his terminal diagnosis, to give up.

“Following Andy’s treatment, I was aware of a drastic change in his personality. Because the radiotherapy was targeted on his brain, it affected him in a way that radiotherapy for any other cancer wouldn’t. Having always been so easy-going, he became very angry and aggressive and somehow that anger seemed to always be directed at me.”

After he finished chemotherapy, Andy ended up back at his mum’s house for a few days, then we made up, before splitting up again.

This time he stayed at home and the children and I left, but Andy became unwell and I came back to look after him until the arguments started again and we decided to split up for good for the sake of the children. 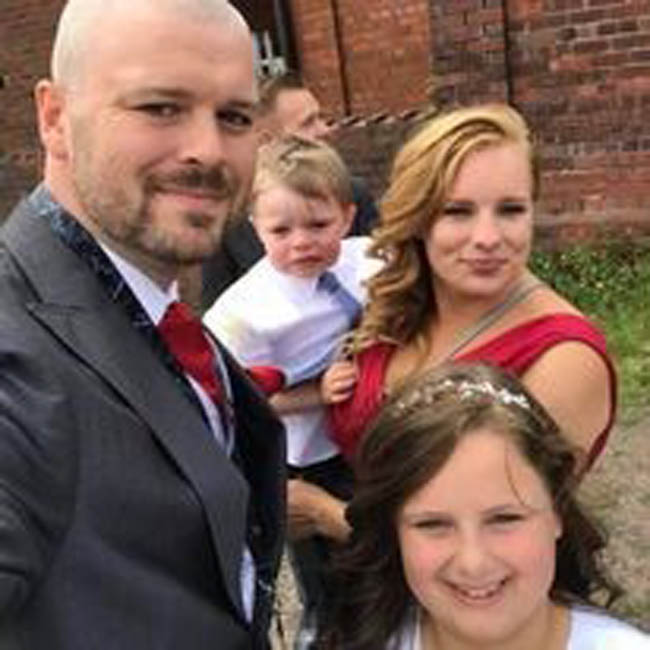 My side of the family seemed to understand, but other people were more judgemental, seeing a wife who had left her husband because of cancer. And yet I had tried everything I possibly could, although it never seemed to be good enough.

“I believed in my marriage vows ‘to love and to cherish, in sickness and in health’, but in the end, I had to put the kids first.”

I sought advice from Macmillan because I felt so guilty, and they told me that too many relationships are devastated by cancer and, of course, when the cancer is in the brain, it’s much more likely to affect the patient’s personality.

Andy had 17 further days of radiotherapy during November and December 2018. He refused to move out of our house and I ended up moving into my best friend’s two-bedroomed house with the two of us sharing a bed in one room and my two kids and her daughter sharing the other. For three months, Lauren, a friend I had known for more than 20 years from when we were both at primary school, supported me through the trauma of my marriage breakdown. I don’t know what I would have done without her.

Andy was continuing to work from home, but had left me with no home or car or money. It was all very messy.

Eventually, however, he agreed to go back to his parents so I could move back home, but I returned to find he hadn’t been paying the mortgage and was forced to put the house up for sale as I couldn’t afford to pay the mortgage, let alone the arrears.

“I suffered a mental breakdown, crying for hours and hours on end, even crying at work, and ended up on medication and having therapy. I felt suicidal but couldn’t actually carry it out and leave the children”.

In August of 2019, Andy was forced to give up work because of his health. He was only able to give me £200 a month for child maintenance, the mortgage and insurance. I was working part-time in a dental surgery, but couldn’t afford to work any more hours because I was having to pay nursery fees for Callum. 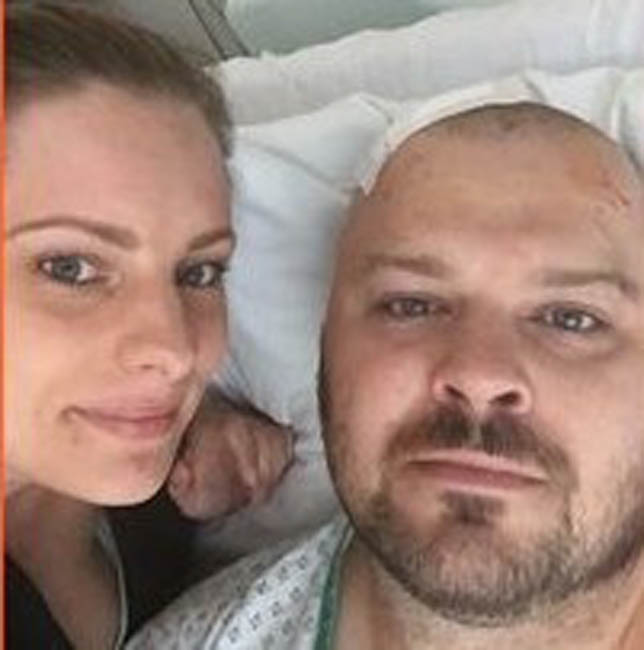 Meanwhile, I still hadn’t managed to sell the house. Three times we had buyers pull out and then in January 2020, we found another buyer, only for it to take eight months for the sale to go through because of the coronavirus pandemic.

We moved in with my mum, sister and brother and will stay until after Christmas 2020.

“When the country went into lockdown because of Covid-19, the kids didn’t get to see their dad for about eight weeks and, in that time, very sadly, he lost his ability to speak.”

In October 2020, Andy became very unwell and was unable to open his eyes. He was admitted into a hospice. He passed away on 11 October. His dad rang me about 2pm that day to let me know Andy had gone at 1.15pm and to tell Katie and Callum. All I could do was gasp. I couldn’t get any words out. Despite our marriage breakdown, I never stopped loving Andy.

“I sat the kids down and Katie was smiling at me expecting happy news. When I told them their dad was gone, Katie collapsed on the floor in floods of tears. I tried explaining what had happened to Callum, but he is autistic and he couldn’t really grasp what death means.” 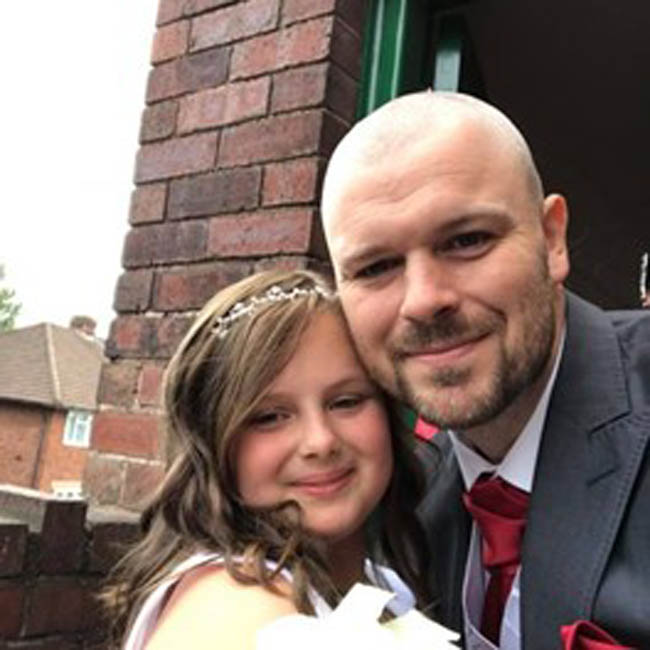 “Brain cancer turned our lives and our marriage upside down. Andy and I had it all until he got the cancer and died aged 33. He had been so young and healthy, so wonderful and kind, a lovely husband and father.”

I remember when Andy was in hospital, seeing children with cancer being wheeled in their beds or wheelchairs for radiotherapy or chemotherapy treatment, he would say how lucky he was that he had been granted up to 30 more years of life than they had. He understood what they were going through and kept positive in front of people, except behind closed doors.

But I saw it all. Andy wasn’t the same after his cancer diagnosis and the radiotherapy.

“Andy knew he was going to lose his life, but I always believed he would get better. Despite what happened and us splitting up, losing Andy and the life we once had is truly devastating.”

Katie had planned to shave off all of her lovely hair to raise funds for Brain Tumour Research before she lost her dad. Bravely, she is still going ahead with the fundraiser, happening just three weeks after his death. She wants to raise enough to sponsor at least one day of research in Andy’s memory. 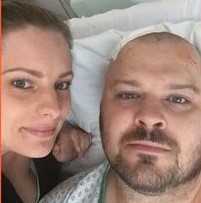